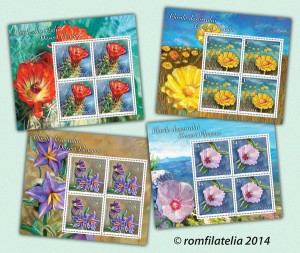 When you think about desert, what is the first thing coming to your mind? Maybe sand and heat? Or perhaps vegetation? Or rather its absence?

Although the desert is a geographical area where rainfalls are very rare, and is known as being favourable to few forms of life, it still gives people numerous and varied plants.

Four of these flowers characteristic to the desert areas are illustrated on the postage stamps of the issue.

On the stamp with the face value of lei 1.00 is reproduced the image of the Echinocereus triglochidiatus flower, belonging to the Cactaceae family.

This plant is native to the southwesternUnited States of Americaand northernMexico, being found in rocky desert regions, but also in shady areas, up to 150-3.500 meters altitude. Given the prosperity of its strains to gather tight, it can also resist at lower temperatures.

The plant has many sprouts, forming hundreds of spherical to cylindrical heavy spiny stems. The red-orange flowers are 8 or 9 centimeters wide. They stay open day and night, blooming from April to June. Its fruits are red and eatable.

On the stamp with face value of lei 1.40 is illustrated the Baileya multiradiata, a plant native to westernMexico and theUnited States of America.

It is a plant belonging to the Compositae family that can be found in desert areas or on sunny sandy soils. It can reach up to 20-50 centimeters height, and grows in large, rug-shaped groups, being an annual or perennial short-lived herbaceous plant. It emphasizes through its yellow flowers, blooming from April to October, and has hair-surfaced deeply lobbed leaves.

Solanum elaeagnifolium, a plant from the Solanaceae family, is presented on the stamp with the face value of lei 8.10. Native to North America, it also spread accidentally inSouth America,Australia,Egypt,Greece,Israel,India,Italy andSouth Africa.

It is an invasive plant, whose spread is difficult to control, dangerous to crops and resistant to drought. The plant multiplies quickly, and has vigorous roots which penetrate the soil up to 2-5 meters depth. Its leaves are silvery-green, hair-surfaced, and the flowers are most often blue to pale lavender, or occasionally white. It blooms from April to August, and its orange-red berries are toxic, a particular characteristic to all the species in the Solanaceae family.

On the stamp with the face value of lei 14.50, we can see the Hibiscus denudatus, a perennial shrub which belongs to the Malvaceae family, and grows up in the southwest of the United States of America, northern Mexico, but also in desert areas, on plates and rocky slopes, up to 600 meters altitude.

The plant reaches 1.5 meters, and the leaves are light green small, hair-surfaced and finely toothed. The flowers are pink or light lavender, but also white, often translucent, in broad cup shape.

The flowers bloom from January to October, and the fruit seeds are often feed for birds.

We thank the management of “Dimitrie Brandza” Botanical Garden in Bucharest for its support in the accomplishment of this postage stamps issue.
Issue date: 2014-01-29 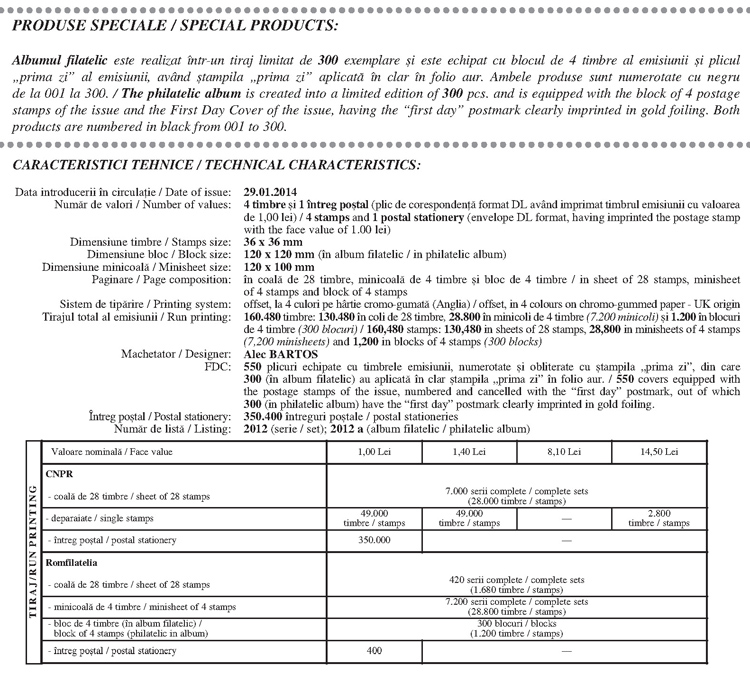