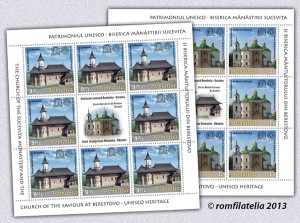 Belonging to the UNESCO heritage, Sucevita Monastery and the Church of the Saviour at Berestovo represent the theme of the joint stamp issue Romania – Ukraine, introduced into circulation by Romfilatelia.

The link between the two churches, subject of the postage stamps issue, is the great personality of Petru Movila (1596-1646), nephew of Ieremia Movila.

Named Metropolitan of Kyiv in 1633, Petru Movila lays the foundation of a college in Pechersk Lavra, out of which the famous KyivSpiritualAcademywill be developed. It should be emphasized the fact that his work, The Orthodox Confession (The Pious Confession) became the third Orthodox faith confession of the Eastern Catholic and Apostolic Church, after the Symbol of faith and Dogma of Saint John of Damascus. This theological paper exposes the orthodox dogma, recognized by the whole Orthodoxy.

The Metropolitan of Kyiv, Petru Movila, is commemorated as a saint in the calendar of bothOrthodoxRomanianChurchand Orthodox Church inUkraine.

Built on the ruins of a former place of worship (the first foundation of the Movilesti family, a modest building dating back to around 1581), Sucevita Monastery was erected between 1582 and 1584 by Movila brothers, during the reign of Peter VI the Lame (1582-1591), at the initiative of Metropolitan Gheorghe Movila. After his acceding to the throne of Moldavia in 1595, the ruler Ieremia Movila (1595-1606) added two porches of small sizes to the church, situated at the church entrance on the north and south sides, the walls and towers inside conferring the monastery the aspect of a medieval fortress, a princely residence whose ruins may still be seen today on the north side of the complex, as well as monk cells.

The church of the monastery is built in the Moldavian architectural style, completed during the reign of Stephen the Great, a style which is in fact a combination of elements belonging to the Byzantine and Gothic art, supplemented by architectural elements of the old wooden churches from Moldavia.

The interior of the monastery is a quadrilateral with 100 and 104 m sides, surrounded by 6 m high and 3 m thick walls, equipped with abutments.

The church was also painted during the reign of Ieremia Movila, both on the inside and on the outside by two Moldavian painters, Ioan Zugravu and his brother, Sofronie. The iconographic programme of the interior and exterior painting reflects the tradition of the first half of the 16th century – the epoch of Petru Rares – but also introduces some new themes, with a theological-dogmatic character, unique in the Christian-Orthodox art.

The exterior painting of the Sucevita Monastery is the best one preserved in the group of all Moldavian churches having an exterior painting, and it is the only one which has kept its north side where the “Ladder of virtues” scene is represented, the most impressive one through the dimension of the dramatism generated by the valoric contrast expressed through the orderly ascension of the virtuous people – guided by angels to sainthood, and the chaotic fall into the seducing hell of sins turned into passions.

The mural of Sucevita Monastery, considered to be “the testament of the Moldavian art” by the French art researcher, Paul Henry, completes the epoch of the great exterior paintings of the 16th century from Humor, Moldovita, Arbore and Voronet Monasteries, recognized as genuine masterpieces of the universal art.

Sucevita Monastery is the place where tradition and innovation interweave originally and picturesquely, in a polychrome presentation, dominated by green and full of life, evoking to the careful spectator the nostalgia of the lost paradise and the transfiguring hope of resurrection in this tumultuous and fascinating holiday of life.

The Church of the Saviour at Berestovois the oldest church from Kyiv area.

The construction works of the monastery started at the end of the 11th century.

The building had three naves, three conches and three domes (Antenave); only the western wall has remained intact, the other walls being revealed through diggings.

The art historians believe that this construction brought structural innovations to the church architecture fromUkrainedue to the fact that it is the first time when all three entrances have porches with trefoil abruptly tilted roofs.

Iuri Dolgoruky, the founder ofMoscow, is buried in this monastery.

In 1990, Pechersk Lavra, to which the monastery belongs, has been included in the UNESCO heritage.

We address our thanks to His Eminence TEOFAN, Archbishop of Iasi and Metropolitan of Moldavia and Bukovina, the Archdiocese of Suceava and Radauti and the Sucevita Monastery for the support granted in the accomplishment of this postage stamps issue. 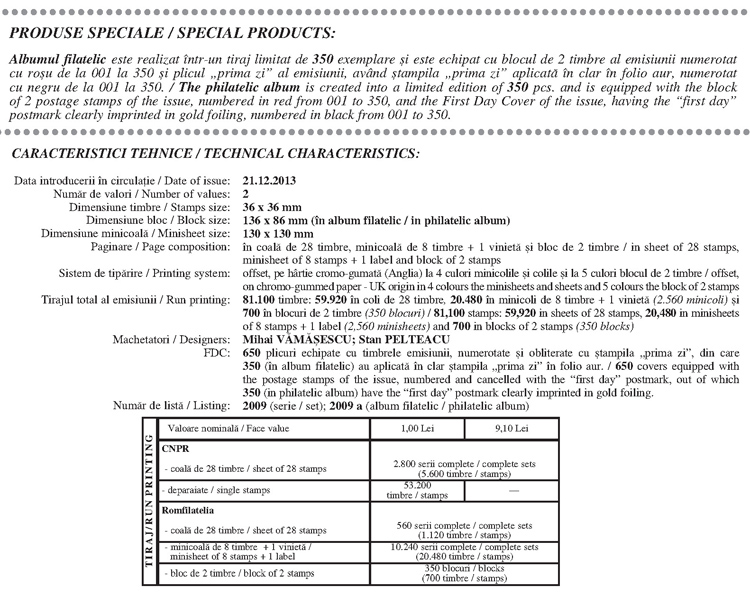