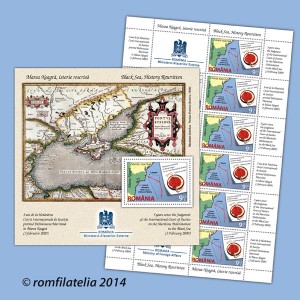 The Judgment of the International Court of Justice (ICJ or the World Court, as it is also known) of The Hague, the principal judicial organ of the United Nations, in the case “Maritime Delimitation in the Black Sea” (Romania v. Ukraine) was publicly delivered on 3 February 2009. In 2014 there are 5 years since this moment, to which Romfilatelia dedicates the postage stamps issue Black Sea, History Rewritten.

The utmost importance of the Judgment resides in the fact that it has established the first and so far the only extension of sovereign jurisdiction and sovereign rights of Romania after the Great Union of 1918.

Thus, through this Judgment, Romania was allotted 79.34% of the 12,200 km2 disputed area with Ukraine, which represents 9,700 km2 of continental shelf and exclusive economic zones, with important hydrocarbon resources, which could ensure a high degree of energy independence for Romania. Compared to the case-law of the Court on maritime delimitations, this result is exceptionally favorable to Romania.

This was Judgment no. 100 of the ICJ and it was adopted with unanimity by the members of the Court, without separate or dissenting opinions, which is without precedent in the activity of ICJ since 1946.

Moreover, the Judgment, rendered by ICJ after proceedings which lasted 4 years, 4 months and 18 days, has put an end to a 42 years bilateral dispute (firstly with USSR, then with Ukraine, its successor State), the 10 rounds of negotiations (1967-1987) with USSR, and respectively 34 rounds (1998-2004) with Ukraine bringing no agreed settlement. In fact, this trial was the first contentious case of Romania before ICJ.

The delimitation methodology used by the ICJ in the case Romania v. Ukraine followed, as Romania has argued in its pleadings during the proceedings, the method developed by the Court in its consolidated case-law – an equidistance line, which was not further adjusted according to relevant circumstances, as they were not identified in this case – method which Romania had proposed during the negotiation process, as well. Romania’s line of reasoning before the Court was largely assumed by the ICJ – especially the rejection of the use of Serpents’ Island as a base point for drawing the delimitation line, as it was not integrated in the configuration of the Ukrainian coast, and the refusal to recognize any other role to this maritime rocky formation in the process of delimitation, as well as the assessment that there was no disproportion between the length of the relevant coasts of the two countries. In the ICJ case-law this Judgment represents an important benchmark, being already cited and used in subsequent delimitations.

The delimitation line acquired by Romania in Court was better than any result which would have been achieved through negotiations. Indeed, the most favorable proposal made by the ex-USSR in 1987 would have given Romania only 50% of the disputed area at that moment, which was only about 4,000 km2. In contrast, the Court’s Judgment allotted to Romania around 9,700 km2, which is in fact almost more than two times and a half, while Ukraine got 2,500 km2.

It is a constant element of the Romanian foreign policy that observing of the principles and rules of International Law, as well as using its instruments, institutions and mechanisms lie at the very core of Romania’s external political action – which is likely to maximize the efforts to achieve its national interest. This case of Maritime Delimitation in the Black Sea, won by Romania, can stand for the best example to show how the Romanian diplomacy knew to use the “smart” instruments of International Law in order to accomplish an objective related to Romania’s national interest.

From a political point of view, the case in The Hague and its outcome represent a model of dispute settlement by peaceful means in the wider Black Sea Region, area where conflicts and tensions are not missing. In the bilateral relations with Ukraine, the Judgment of 3 February 2009 removed – by solving it – an extremely complicated and sensitive problem from the bilateral political agenda, which may positively influence the resolution of other complex bilateral issues. As a matter of fact, both States immediately welcomed the solution provided by the Judgment of the International Court of Justice, and there has been no problem in its implementation since 2009 to present.

We thank the Ministry of Foreign Affairs and the management of the National Museum of Maps and Old Books for their support granted in the accomplishment of this postage stamps issue. 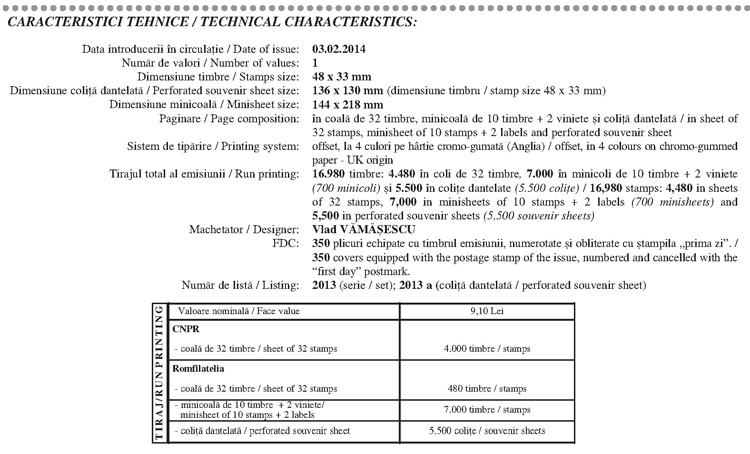