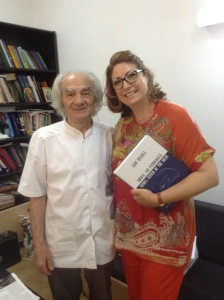 Romfilatelia has recently developed a new project entitled Respecting Romania’s values – People, achievements, values, dedicated to some of the personalities who were and still are milestones of professionalism, talent and commitment.

Thus, on Friday, September 16th  2016, Romfilatelia’s representatives visited professor Leon Danaila, at his office from the National Institute of Neurology and Neurovascular Diseases in Bucharest, offering him, as a gift, the product of the philatelic campaign – the postal stationery designed in his honour.

With affection, genuineness and modesty, the professor was touched by Romfilatelia’s surprise, thanking for the gesture which so pleasantly impressed him.

The Romanian stamp will continue the campaign dedicated to the great creators and keepers of the Romanian sprit, offering to the public the opportunity of coming closer to their geniality as well as to their humanity which defines them.