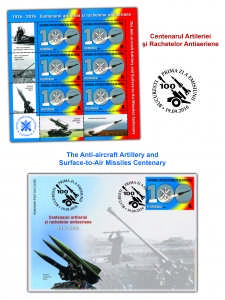 Marking 100 years since the establishment of the Romanian Artillery and Anti-aircraft Missiles branch, Romfilatelia brings a new philatelic issue to the public interested in stamps, celebrating this anniversary and also honouring anti-aircraft artillerymen’s tradition and heroism.

Based on an interesting topic and being suggestively entitled The Anti-aircraft Artillery and Surface-to-Air Missiles Centenary, the anniversary philatelic project is dedicated to those who love history and flying, as well as to those who watch the sky with professionalism, responsibility and courage, being available starting on Monday, September 19th, in Romfilatelia shops from Bucharest, Bacau, Brasov, Cluj-Napoca, Iasi and Timisoara.

Starting from the adaptation of field or fortress artillery for gunnery and reaching complex systems of surface-to-air missiles, the Artillery and Anti-aircraft Missiles branch has become, over time, an essential component of the Romanian airspace defence.

For the development of the artillery, the interwar period represented a milestone in all areas: organization and endowment, teaching the military personnel and the unit, the development and modernization of the means of production and repair, and in the field of means and techniques of Anti-aircraft Defence.

Artillery and anti-aircraft missiles represent the experience of the last century, gained nationally and internationally. The chronicle of the weapon’s evolution, from its foundation to the present, is dotted with numerous acts of heroism, feats of arms of the artillery and the anti-aircraft missile units, who were able to turn the mission into a sacred and noble duty.

This issue consists of a stamp with the face value of lei 8,00 and a first day cover, the anniversary brought to the attention through this project being suggested by both its title and graphic conception.

The project is designed in a suggestive palette of colours, the postage stamp presenting elements related to the issue’s theme: the figure 100, inside which is found a symbolical representation of the field of activity and of the celebrated anniversary, together with the image of the Hawk surface-to-air missile, and the period 19 of September 1916 – 2016, used to emphasize the anniversary moment.

As page composition were used the sheet of 32 stamps and the minisheet of 6 stamps + 4 labels +
2 tabs. The labels and the tabs illustrate images of various anti-aircraft missiles and guns, thus completing the selected topic.

By the anniversary of the anti-aircraft artillery and surface-to-air missiles centenary, the Romanian stamp adds a new page of honour and history to the national philatelic patrimony and, at the same time, endorses the anti-aircraft gunners’ glorious acts of heroism in the valuable stamp collections of the Romanian nation.