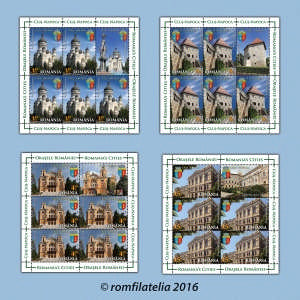 The evolution of Cluj to the status of “treasure city” and primary city of Transylvania, as it was considered at the beginning of the 16th century, registered a historic moment of prime importance in 1316 when it was granted the status of “city”.
However, its first documentary attestation appeared in the first half of the 2nd century AD when the Greek geographer Ptolemy mentioned this important locality of the Roman Dacia. During the Emperor Hadrian’s era, the settlement gained the status of provincial capital, then becoming “Colonia Aurelia Napoca”.
Cluj escaped the domination of the Roman – Catholic diocese in 1316 when the civil war between King Charles Robert of Anjou and other pretenders to the throne broke out. To get the support of the inhabitants of Cluj, Charles Robert granted them, by the royal diploma of 19 August 1316, the freedoms they wanted, including the one to elect their own judges and priests. Thus, Cluj gained the status of “city” (civitas), becoming one of the first cities on the current territory of Romania.
The city also enjoyed the protection of a great king who was born in Cluj: Matthias Corvinus (1458-1490). His reign is related to the construction of representative buildings for Cluj –the church and the Franciscan monastery (today the reformed church).
The union of Transylvania with Romania in 1918 took place while Cluj was a modern and thriving city. In the interwar period it had a strong economic and cultural development, standing out as one of the main urban centres of Greater Romania.
The year 2016 marks the celebration of 700 years since Cluj has been granted the status of city and on this occasion Romfilatelia introduces into circulation a thematic philatelic issue, from the Cities of Romania series dedicated to the Municipality of Cluj-Napoca.
The stamp with the face value of lei 3.50 reproduces the image of the “Dormition of Virgin Mary” Orthodox Metropolitan Cathedral, one of the most beautiful buildings of Cluj-Napoca, the Romanian Orthodox Cathedral, was built during the pastorate of Bishop Nicolae Ivan.
The construction works started in 1923 according to the plans of architects Constantin Pomponiu and George Cristinel and in November 1933 the consecration of the church was attended by Patriarch Miron Cristea, King Carol II of Romania, the Crown Prince Michael and government members.
The cathedral was built in a trefoil plan and is specific to the traditional Romanian Orthodox architecture with rich reliefs carved in stone and geometrical and floral motifs. The frescoes bear the signatures of Anastasie Demian and Catul Bogdan.
The stamp with the face value of lei 4.00 reproduces the image of the Tailors’ Bastion (Tower), which was named after the tailors’ guild in Cluj which maintained it and had the task of safeguarding the city at that point, being the largest defence tower of the city that was entirely preserved.
The tower represents the south-eastern corner of the medieval fortress built since the 15th century. Between 1627 and 1629, the fortress was rebuilt in the form which we can admire today.
The stamp with the face value of lei 4.50 reproduces the image of the “Lucian Blaga” National Theatre and Romanian Opera.
The building of the “Lucian Blaga” National Theatre and of the Romanian Opera was built between 1904 and 1906 according to the plans of famous architects Hermann Helmer and Ferdinand Fellner. The auditorium has 928 seats and is made in Neo-Baroque style.
The first performance in Romanian on the stage of the National Theatre of Cluj took place in December 1919, with the plays “Se face ziua/It is getting light” by Zaharia Barsan and “Ovidiu” by Vasile Alecsandri.
The Romanian National Opera of Cluj-Napoca is the first lyrical dramatic state institution in Romania. The inaugural performance took place on 25 May 1920, with Verdi’s Aida. From this first performance until present, more than 200 operas, operettas and ballets from the universal repertoire have been performed on the stage of the Romanian Opera.
The stamp with the face value of lei 15.00 reproduces the image of “Babes – Bolyai” University.
The Municipality of Cluj-Napoca is a renowned learning, education and science centre. Babes-Bolyai University is one of the most prestigious state higher education institutions in Romania, successor of the tradition of Cluj University founded in 1872. Since 1959, the University has borne the name of Romanian bacteriologist Victor Babes and the name of the Hungarian mathematicians family Bolyai.
The building of the Babes-Bolyai University was erected in the Eclectic style between 1893 and 1902 and is a multicultural educational institution.

Romfilatelia thanks the “Babes-Bolyai” University and Cluj-Napoca City Hall, Mr. George Avanu and Stefan Socaciu for the documentary support granted in the creation of this postage stamp issue. 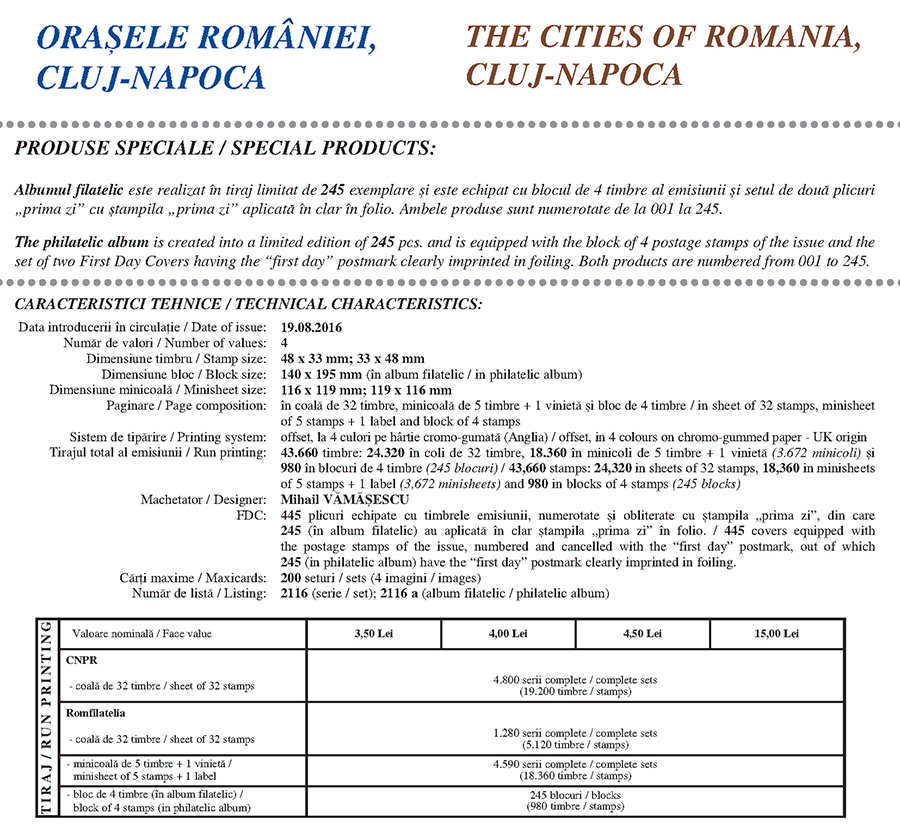