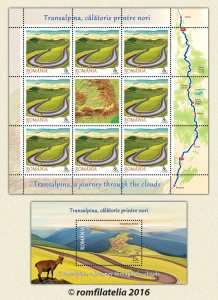 The most beautiful and the highest road in Romania, Transalpina, is one of the “jewellery” roads of the country. Situated at more than 2000 m high, it can be crossed by car,reaching the maximum limit in Urdele Pass, 2.145 m. It was also called the “King’s Road”, since King Carol II inaugurated it by crossing it along with the royal family and the Prime Minister at that time, Gheorghe Tatarescu.
The inauguration happened during the first days of 1938 in Poiana Sibiului, the road being considered at that time, a great technical achievement, having economic, strategic and military role.
Lost in the mist of time, the legend of the first building of this road starts 2000 years ago. In terms of time maps, the “strategic corridor IV” was used by Romans on their way to Sarmisegetusa, while fighting against the Dacians. The local legends say that the road was built and paved by the Germans during the First World War, and yet currently, on exactly the same road, beauty seekers can find areas where history left visible traces over people and places.
What is certain is that this route, also known as the “Devil’s Path”, was initially no more than a small path used by shepherds. Nowadays, the local inhabitants speak proudly about this road, since their ancestors helped build it between 1800 – 1900.
“Transalpina” comes from Latin and means the “country beyond mountains”. Situated in the Southern Carpathians, the 148 km long road connects Oltenia and Transylvania between Novaci, in Gorj County and Sebes, in Alba County. The road crosses Parang Mountains from north to south and forms a parallel with Olt Valley and Jiu Valley.
The route is host to countless tourists coming to sit above the clouds and admire the breathtaking landscapes! Obviously, due to the high altitude, Transalpina is closed in certain periods of the year, especially during wintertime, but not at the same date every year. It is among the few roads in the country where you can reach the clouds by car and even beyond them.
Yet, Transalpina is not just a sensational road you can find at great heights and bearing wonderful landscapes, it is also a place where one can encounter many lakes – Oasa Lake, Galcescu Lake, Rosiile Lake – and caves, among which Muierilor Cave, Polovragi Cave, spectacular forms of relief specific to the mountainous area, of great landscape attraction, which stand out by high altitude peaks, ridges and glacial relief. The beauty of the places is enriched by the vigorous brushwoods of juniper, wild peony, blueberries and cranberries. The flora and fauna are specific to high mountains. As regarding the fauna, the chamois is frequently encountered, while the wolf and the brown bear are common presences.
The wonderful Transalpina came to be famous even abroad. Ranked by the team of the famous show Top Gear as the best driving road in the world, Transalpina also brought the team members of the British EVO Magazine to our country. Journalists Henry Catchpole and Dean Smith tested a car on the road that slithers through the mountains and they admitted that the route is wonderful and that they were won over by the high altitude road.
For those who use this road, it is imperative that they maintain the natural environment as beautiful and clean as it currently is. It is worth striving to feel the unprecedented pleasure to climb a road that leads you to the clouds and sometimes even above them.
The stamp and the souvenir sheet of the issue, by a special graphic approach, stand as an open invitation to a public of all ages, to go on a metaphoric journey across the clouds, on the “King’s Road”.

Romfilatelia thanks the National Company of Motorways and National Roads in Romania and Mr. George Avanu for the documentary support granted in the creation of this postage stamp issue. 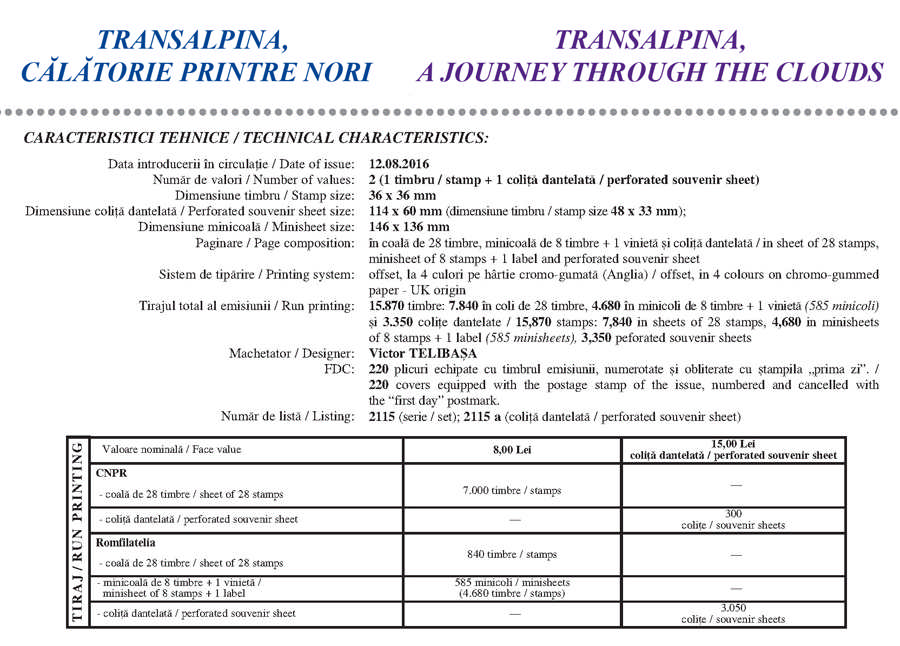