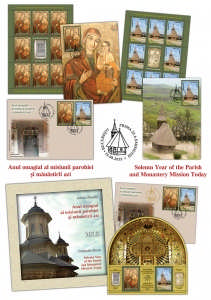 In its mission to promote national values and symbols, as well as facts of great importance for the Romanian people, Romfilatelia pays homage, through the latest philatelic project it achieves, to an important spiritual event of the year.

In the context of declaring 2015 as the Solemn Year of the Parish and Monastery Mission Today, the postage stamp issue with eponymous title marks this event, being dedicated to the Nicula Monastery and to the pilgrimage to the miraculous icon of the Virgin Mary, located in this holy place.

The icon of the Virgin and Child was painted in 1681 by Father Luca, from the town of Iclod. In 1694, the Nicula village became the property of several small Romanian local nobles, one of them being Ioan Cupsa, who would buy the icon of the Virgin Mary from Father Luca. The icon was meant for his community church and would later be entrusted to the monastery on the hill.

Five years later would be born one of the most spectacular phenomena of the Transylvanian culture and spirituality, the pilgrimage to the Nicula Monastery, based on an important record of that time “the icon of Virgin Mary with Child, found today at Nicula, has wept continuously between February 15th and March 12th, 1699”.

The postage stamps of the issue invite for an emotional journey in Transylvania, source of ideality and meditation, inspiring the viewer to discover the sacred symbol of Cluj, the Nicula Monastery, ancient hearth of the Romanian Orthodox spirituality, known as one of the oldest monastic settlements within the Romanian space.

The icon on wood of the Virgin and Child (17th century), illustrated on the stamp with the face value of lei 1,00 is an artistic reproduction of the Holy Icon of the Virgin Mary, dating from the same period as it, as well as the wooden church within the monastery. Dated stylistically to the late 17th century, the icon was brought from the Ceaca parish, in the County of Salaj and was restored in the late 18th century.

The stamp with the face value of lei 4,50 reproduces the image of the wooden church from the Nicula Monastery, keeper of the miracle of the weeping Virgin. Passing the test of time and overcoming the challenges of old times, the monastery is still venerated today by the many faithful who circle around the church on their elbows and knees, praying devoutly to the Virgin.

The Nicula Monastery is today the largest pilgrimage center in Romania. Long convoys of believers from all over the country head towards it every day, on Sundays and holidays, but especially during a loved feast of the Romanian people, the Assumption of the Virgin Mary, also called St. Mary the Great, celebrated on August 15th (recognized as a national holiday by the Romanian State).

The issue is completed by a first day cover and a set of 2 maxicards, and as page composition were used the sheet of 32 stamps, the minisheet of 8 stamps + 1 label and the block of 2 stamps + 3 labels (in philatelic album).

The special product of the issue is the philatelic album, created into a limited run printing of 310 pieces and is equipped with the block of stamps and the first day cover, cancelled with the „first day” postmark clearly imprinted in gold foiling. Both products are numbered from 001 to 310.

The stamp issue block has a special shape that mirrors the solar shape of the iconostasis. Its is found in the great church of the Nicula Monastery and is a piece of rare beauty, unique in the Orthodox East. The iconostasis which adorns the church was carved in linden wood by craftsman Samuil Kerestesiu, in 1938 and has at its center the miraculous icon of the Virgin Mary.

Starting with Saturday, August 15th, 2015, the postage stamp issue Solemn Year of the Parish and Monastery Mission Today will be available in all Romfilatelia shops in Bucharest and countrywide.

Romfilatelia thanks His Grace Andrei Andreicut, Archbishop of Vad, Feleac and Cluj and Metropolian of
Cluj, Maramures and Salaj, Archimandrite Nicolae Moldovan, abbot of the Nicula Monastery, Cluj County,
the Dej Municipal Museum and Father Siluan Timbus for their support in the achievement of this postage stamp issue.