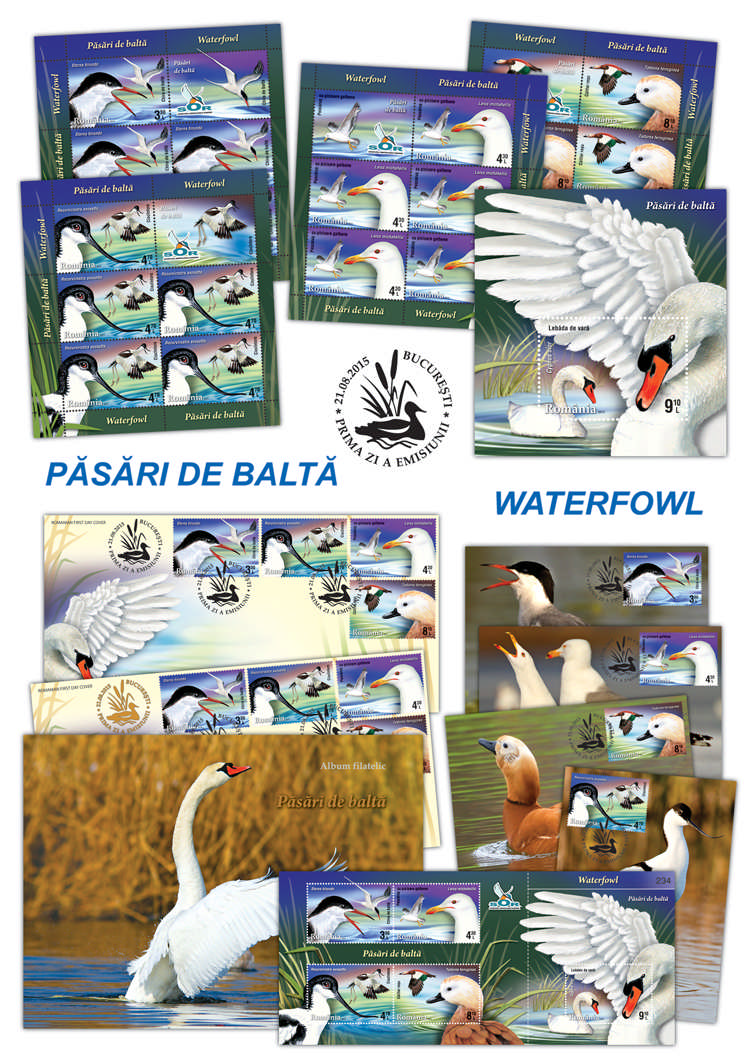 Attractive theme, both for children and for adults, fauna is often found in the Romanian philatelic patrimony, being appreciated by collectors, that arouses interest not only of the philatelists, but also, the general public.

The latest postage stamp issue also integrates in the fauna topic, entitled waterfowl and being compound from 4 stamps and one souvenir sheet.

Observed and documented by humans since the beginning of their cohabitation on Earth, birds are often found in the folklore and art of many civilizations, becoming symbols in universal culture.

Waterfowl, tireless travelers who roam the shores of all continents in search of food and a favorite place to nest, are impressive in their amazing flight and gave rise to the admiration of viewers. “In the air, their wingtips can reach the water or the can climb up to more than six kilometers. They are accomplished masters of flight”, reads the book “Shorebirds – Beautiful Beachcombers” by Arthur Morris

The common tern (Sterna hirundo), represented on the stamp with the face value of lei 3.30, is characteristic of coastal wetlands and freshwater inland lakes. These graceful birds feeds on fish, insects and snails and can be found in the northern areas of their habitat between April and October, after which they migrate south to warmer climates during the winter.

On the stamp with the face value of lei 4.30 is featured the yellow-legged gull (Larus michahellis), a sedentary bird found near ponds, lakes and along the coastline. The yellow-legged gull is defined by the colors gray-silver, white, black and yellow, his food consists of fish and various aquatic species they catch in flight directly or by shallow diving.

The pied avocet (Recurvirostra avosetta) is a bird specific to the coastal areas, salt water lagoons, deltas and marshes, swamps and shallow lakes.

Illustrated on the stamp with the face value of lei 4.70, the bird is the size of a dove, it is a social species that roams in flocks and nests in colonies and their synchronization within a flock is impressive. In Romania it can be found in the Danube Delta, on the shore and near coastal lakes.

On the stamp with the face value of lei 8.10 is found the ruddy shelduck (Tadorna ferruginea), migratory bird widespread in Central Asia, but less so in Europe.

Due to its beautifully colorful feathers, the ruddy shelduck is kept as an ornamental bird. In Romania it is rare, preferring isolated lakes, possibly with islands, away from human presence.

The perforated souvenir sheet of the issue with the face value of lei 9.10 present the mute swan (Cygnus olor), a species that lives in freshwater or saltwater areas, often it can be found in urban areas. It is recognized by its white ,,S-shaped” neck, its red-orange beak, black legs and the habit of arching its wings over its back. In Romania it returns in the warm season and nests more readily in the Danube Delta and Razim-Sinoe lagoon complex as well as in some large ponds in the lowlands.

The issue is completed by a postal stationery, the first day cover and a set of 4 maxicards, and as page composition were used the sheet of 32 stamps, the minisheet of 5 stamps + 1 label and the special block of 4 stamps + the perforated souvenir sheet (in the philatelic album).

The philatelic album, the special product of the issue, is created into a limited edition of 275 pcs. and is equipped with the special block of the issue and the First Day Cover of the issue, having the “first day” postmark clearly imprinted in gold foiling. Both products are numbered from 001 to 275.

Starting with Friday, August 21th, 2015, the postage stamp issue Waterfowl will be available in all Romfilatelia shops in Bucharest and countrywide.

Romfilatelia thanks the Romanian Ornithological Society for the documentary support given in the accomplishment of this postage stamp issue.