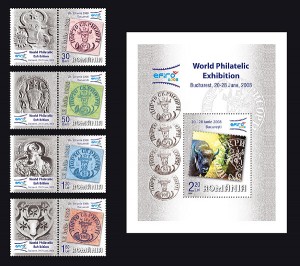 In 2008, 150 years shall have passed since the issue of the first Romanian postage stamp, the famous “Bull Head”. On this occasion, Romania shall organize the first World Philatelic Exhibition, called EFIRO 2008.
To promote this major philatelic event among the population, Romfilatelia, the specialized company in issuing and trading Romanian postage stamps, introduces into the circulation the philatelic issue World Philatelic Exhibition EFIRO 2008.
The first EFIRO exhibition (E-exhibition FI-philatelic RO-Romanian) with international participation took place in 1932, under the high patronage of King Charles II. The following two exhibitions took place at the Parliament Palace in 1998 and 2004.
In 2008, at the Romexpo complex, where the World Philatelic Exhibition EFIRO 2008 shall take place, postage stamps from the collections of Queen Elisabeth of Great Britain and of Prince Albert de Monaco shall be exhibited. Besides these, “Penny Black”, the first postage stamp in the world (1840) shall be present, as well as several copies of the first Romanian postage stamp – “Bull Head”. At the same time, another philatelic rarity shall be exhibited, i.e. a letter dating back from the World
War II, which still carries the traces of the radiations of the Hiroshima bomb.
More than 1000 collectors coming from more than 70 countries of the world are expected to participate in this World Philatelic Exhibition.
The philatelic issue presents in the “stamp on stamp” style the postage stamps of the first issue “Bull Head” (15th of July 1858).
The postage stamps of the issue having the face value of RON 0.30, 0.50, 1.20 and 1.60 carry the image of the four postage stamps issued in 1858, i.e. of the face values of 27, 54, 81 and 108 Parale. The images of the postage stamps are associated to labels whose leitmotif is the Moldavian Blazon, carved in stone, in four different hypostases.
The postage stamp of the perforated souvenir sheet, having the face value of RON 2.20, reunites in a unitary graphic representation the drawing of the postage stamp “Bull Head” and the image of the Moldavian bull in his natural habitat.
All the components of the issue carry the logo of EFIRO 2008.