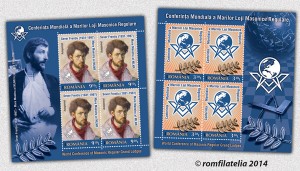 On the occasion of this year’s organisation in Bucharest, between May 14th- 17th, of the World Conference of Masonic Regular Grand Lodges, Romfilatelia introduces into circulation the postage stamps issue dedicated to this event.

Of particular importance, the organisation of the World Conference of Masonic Regular Grand Lodges inRomaniais perceived as a unique event in our society, as an evocation of a special consideration thatRomaniaachieves worldwide.

From a Masonic standpoint, the choice of the host country for this Conference is a factor of indisputable progress for the Romanian Freemasonry which will benefit from the experience exchange regarding the realities faced by every Grand Lodge, but also from the area discussions that will certainly generate a search for solutions to some punctual blockages, leading both to the increase of executive efficiency within every Grand Lodge, and a more precise knowledge of the training level and conduct of their own activity.

In a friendly atmosphere, the World Conference will materialize the concept of Masonic Universal Chain through its true use and power of action, as on these occasions are established bridges between the leaders of each Grand Lodge, which will give stability in bilateral relations regardless of the geographical location.

The most important way to fulfill the assumed role emerges from the values to which it relates, from the desire to receive within the Freemasonry people reflecting real models, so that they can convey to all real values that lead to union, trust and confidence in the Masonic work and especially in the daily life of every Mason.

The fact that over time, personalities belonging to the civil society in Romania were members of the Freemasonry says many things about the quality of the organization, appreciated for its responsibility to promote models that are to be followed by others, to forward value and excellence, characteristic elements of the Romanian people.

The National Grand Lodge of Romania was led between1996 and 1997 by the Grand Master Sever Frentiu. Author of a complex work of outstanding value, painter, engraver, decorator, designer, Sever Frentiu occupies a special place in the history of contemporary art.

In 1931, in a village in BihorCounty, called Sacuieni, was born Sever Frentiu. His parents, in full respect of the tradition of those times inTransylvania, gave him the name of a Roman Emperor.

Proving an exceptional personality very present in his paintings, characterised by a personal and unique style, Sever Frentiu created an artwork which was itself a huge act of resistance to the totalitarian system, being extremely difficult for the uninitiated to understand, as it was full of symbols.

Sever Frentiu would have probably remained a last great representative of world Surrealism, and we wouldn’t have praised him today as a Man, but exclusively as an artist, if he hadn’t joined the Freemasonry.

He joined the Italian-American entity created in 1993, while in 1995 he became Worshipful Master of the Nomine Lodge inBucharestand Second Biggest Supervisor of the National Grand Lodge of Romania.

In January 1996 he is elected Grand Master of the National Grand Lodge.

He died on November 9th, 1997, leaving behind an entire work of inestimable value.

Freemasonry, through all it achieved and continues to do, managed to restore within the Lodges, the brilliance of vanguard thinking, while the Romanian society is looking forward with great interest to the appearance of signals and rays of hope in difficult times of social life.

Romfilatelia thanks the National Grand Lodge of Romania, the “Friendship and Tolerance” Association and Mrs. Dorana Cosoveanu, author of the album “Sever Frentiu”, for the documentary support granted in the achievement of this postage stamps issue. 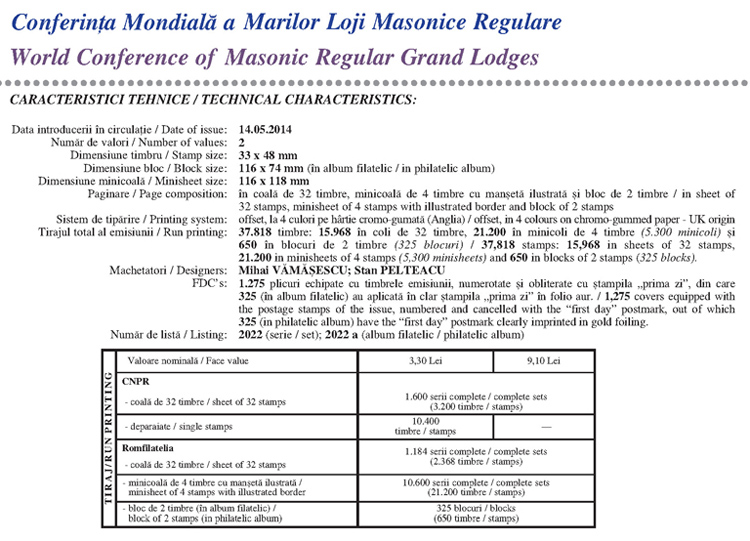