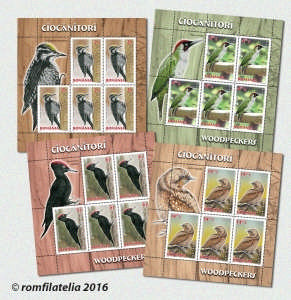 We invite you to a journey into the unknown world of woodpeckers! We think we know them, but is it so? How many of us didnt hear in our childhood about the woodpeckers, the doctors of the forest?
The woodpeckers family is ancient and spread to almost the entire planet, excepting Australia, New Guinea, New Zealand, Madagascar and Antarctica.
Their natural enemies are martens and squirrels in particular, that steal their eggs and chicks, but also birds of prey.
Unlike other bird groups and families the way of procuring food of the Picidae resulted in a feature adaptation of their body. As their name suggests, woodpeckers get their food by pecking, chiseling and hollowing tree trunks, especially those touched by rot, to extract and feed on larvae and insects.
When a woodpecker is in full action, its beak hits the tree with a velocity of 6-7 m/s, which is about 20 km/h, being able to hit the tree 20 times per second. Stopping is done virtually instantaneously, in a millisecond; the deceleration (slowing) of the impact is 1000 times stronger than the force of gravity.
Researchers have tried to explain how the birds head withstands such shock. The woodpecker has a skull with a special structure, thickened and spongy and a small brain, only 2 to 4 grams, which makes the impact of the deceleration to be distributed on a proportional cranial area larger than that of a man. During the movement, the head, beak and the brains center of gravity follow a rectilinear trajectory, but not parallel. Also, its muscular neck has a certain rigidity which prevents the heads twisting during impact.
The philatelic issue dedicated to these birds presents within its 4 postage stamps, species of woodpeckers found in Romanias avifauna: Picoides tridactylus, Dryocopus martius, Picus viridis and Jynx torquilla.
Picoides tridactylus (Eurasian three-toed woodpecker) is characteristic of old coniferous forests, being a hardly noticed species. The presence and abundance of the species depends on the amount of rotten wood. It eats mostly insects, and in winter, at lower heights, it can often be seen feeding on tree sap.
Dryocopus martius (the black woodpecker) is spread on deciduous, mixed and conifer forests. It is a sedentary species and prefers the tall trunks of old forests. It feeds on insects and their larvae from under the bark of trees. Insects are caught by its long tongue, which is covered with a sticky substance excreted by the salivary glands. During the search of food, the black woodpecker makes large holes in the decayed trunks of trees using its powerful beak.
Picus viridis (the European green woodpecker) is not considered to have preferences for certain types of forest habitat, its distribution is limited by the availability of prey in particular, and it is a true specialist in this regard. It prefers more open forest areas, orchards, forest skirts, wooded meadows. It feeds exclusively on ants and their larvae, which are typically procured by destroying their anthills.
Jynx torquilla, known as the Eurasian wryneck, can be found in all deciduous woodlands with old trees and during migration it can be seen in parks and gardens. The plumage is unusual for woodpeckers, which have a more exotic colour. Appearance and mottled gray-brown colour make this bird resemble and even be confused with thrushes. The Eurasian wrynecks plumage colour provides it with a very good camouflage, being nearly impossible to see it when sitting on branches or tree bark. The Eurasian wryneck is less skillful at climbing trees than other woodpeckers, and on the ground it moves by hopping. Woodpeckers are birds to be protected; by their way of life, they make an important contribution to combating pests in forests and orchards, being rightly called the forest doctors. At the same time, they indirectly help many species of songbirds by hollowing out nests and abandoning them annually to build new ones.

Romfilatelia thanks the Romanian Academy Institute of Biology, the National Park Calimani and photographers Daniel Petrescu, Cristian Mihai, Silviu Matei and Dan Grigoroaea for the documentary support offered in the creation of this postage stamp issue. 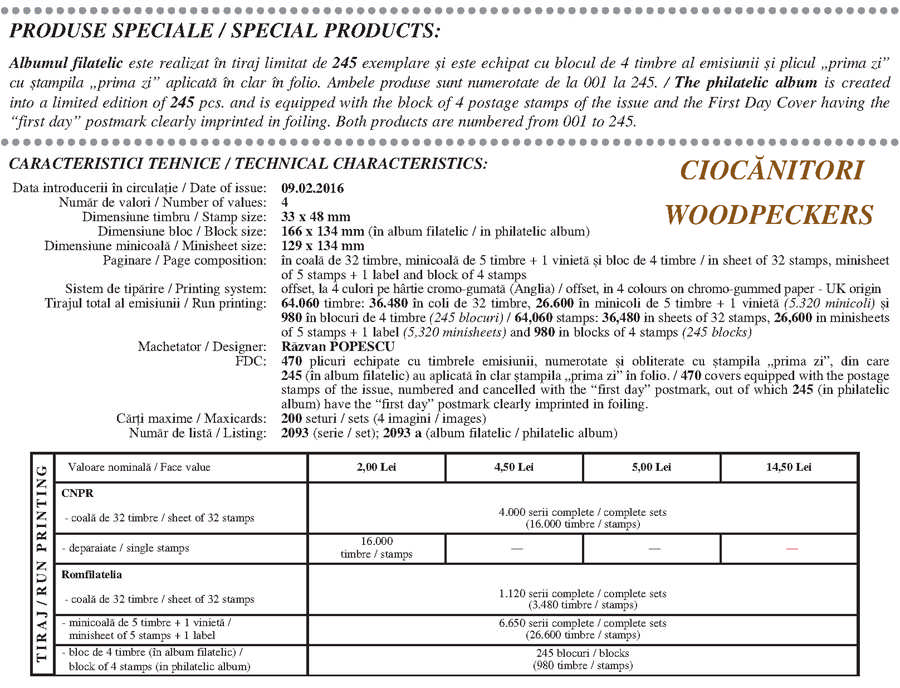