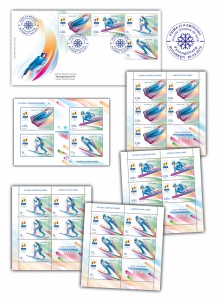 Having a history of nearly 100 years and inspired by the Greek Olympic Games of the 8th century B.C. – 4th A.D., the Winter Olympics Games from this year is the most awaited sporting event. The first edition took place in 1924 in Chamonix, France, and brought together five sports practiced at that time: bob, curling, ice hockey, skating and skiing.

The Winter Olympic Games will be hosted this year by PyeongChang, a city in South Korea, between 9th and 25th of February. It is for the first time that an edition of the Winter Games is organized in this country. South Korea also hosted the Summer Olympics, in Seoul (1988).

Romfilatelia is alongside Romanian athletes participating in the 23rd Winter Olympic Games, PyeongChang 2018, by introducing into circulation the postage stamp issue dedicated to this international multi-sport event. The new issue, Winter Olympic Games 2018, will be available on Friday, February 9th, 2018, in Romfilatelia’ own shops network in Bucharest, Bacau, Brașov, Cluj-Napoca, Iași and Timișoara and online on https://romfilatelia.ro/store/.

This year, the outfits of the medal bearers and escorts are in red, white and blue, inspired by the colours of South Korean national flag.

Instead of flowers, the medal winners of these sport competitions will be given the mascot-doll Soohorang. The doll will wear a gold, silver or bronze hat and a paper flower known as uhsahwa. The medal winners will also receive a wooden souvenir adorned with mountain scenes of PyeongChang and characters from the Korean Hangul alphabet spelling out “PyeongChang 2018”.

Romania participated for the first time at the Winter Olympics at the 1928 edition, in Saint Moritz. Our country did not have representatives at the inaugural edition of Chamonix, in 1924, and at the 1960 competition, in Squaw Valley. At Grenoble 1968 Winter Games (France), Romania’s team, comprised of the athletes Ioan Panturu and Nicolae Neagoe, won the bronze medal at the 2-man bobsleigh race.

The postage stamp issue is completed by a First Day Cover, as page composition there were used a sheet of 32 stamps, a minisheet of 5 stamps + 1 label and a block of 4 stamps.

Romfilatelia thanks the Romanian Olympic and Sports Committee for the documentary support given for the creation of this postage stamp issue.