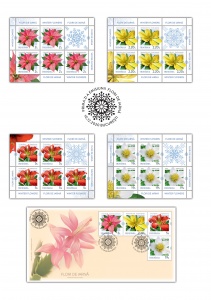 Romfilatelia introduces into circulation, on Thursday, December 10th, this year, a postage stamps issue that combines a theme much loved by collectors – flowers – with the topicality of the season: Winter Flowers.

The vast majority of spontaneous and cultivated plants in our country bloom in spring and summer, but a small number of species produce flowers in the cold season. Some of them are native plants, from the spontaneous Flora of Romania; others are exotic species, cultivated in our country either as garden plants or as houseplants, precisely for the decorative flowers that appear during the winter.

The Christmas Eve flower, also called the Christmas star or poinsettia (Euphorbia pulcherrima), is illustrated on the first stamp of the series, with the face value of Lei 2. This plant is indigenous to Central America – Mexico and Guatemala. Its distinctive feature is the coloured leaves that surround the inflorescence; they are not petals, as it is often believed, but modified leaves, called bracts. In wild plants, these bracts are red; varieties with pink, cream, etc. bracts were also obtained in culture. In the Anglo-Saxon world, it is called poinsettia, after the name of the botanist Joel Roberts Poinsett, the first US ambassador to Mexico, who introduced this plant to the USA in the first half of the 19th century. Today, hundreds of millions of Christmas star specimens are sold worldwide during the winter holidays.

The winter aconite (Eranthis hyemalis) is depicted on the second stamp of the series, with the face value of Lei 2.20. It is a small forest plant, indigenous to Europe. It blooms in late winter or very early spring, even when the ground is still covered in snow. It is an ephemeral plant (i.e., it has a very short vegetation cycle). It blooms when the amount of light that reaches the ground is maximum, when the trees are leafless; it quickly produces seeds, then the aerial part of the plant dries, leaving in the soil a bulb from which the plant will grow again the following year.

On the third stamp of the series, having the face value of Lei 5, the amaryllis (Hippeastrum sp.) is illustrated. Plants in the Hippeastrum genus are indigenous to South and Central America. Various species of Hippeastrum are grown in Europe as houseplants. (The term „sp.” in the scientific name of the plant is an abbreviation of the Latin word „species” and indicates that image shows a plant in the Hippeastrum genus, without specifying the exact species, which often can only be determined by specialists.) The flowers are large, spectacular, white, red, pink, orange, sometimes in colour combinations, with dots or stripes. Depending on the species, the plants can have between 2 and 15 flowers. Hippeastrum is often called Amaryllis, but actually this is the name of another genus of plants, very similar to Hippeastrum, but indigenous to Africa, not America.

Hellebore (Helleborus niger) is shown on the fourth stamp of the series, with the face value of Lei 19. It is an evergreen plant, indigenous to the mountainous areas of Europe. It has white or pink flowers. It has been known since antiquity as a medicinal plant, although it is very toxic. Over time, it has been used in traditional medicine to prepare remedies; at present, its use has been largely abandoned. It is also cultivated as a houseplant or garden plant, flowering from winter to early spring. Through selections and crossings between different species of hellebore, varieties with flowers of various colours, from white to dark purple, were obtained.

The first day envelope pictures the false Christmas cactus (Schlumbergera truncata). The plant is indigenous to the mountainous area of south-eastern Brazil. Unlike other cacti, which prefer arid areas, this one grows in wetter and cooler areas. In Brazil it blooms in May, even bearing the name of May flower. In the Northern Hemisphere, where it is grown as a houseplant, it often blooms in winter, hence the name Thanksgiving cactus or Christmas cactus.

Romfilatelia thanks the “Dimitrie Brândză” Botanical Garden of the University of Bucharest and the Institute of Biology of the Romanian Academy for the documentary and photographic support provided for the development of this postage stamps issue. 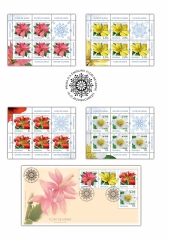 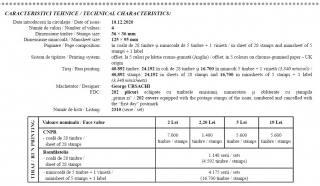 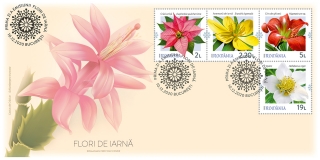 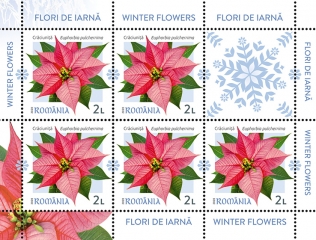 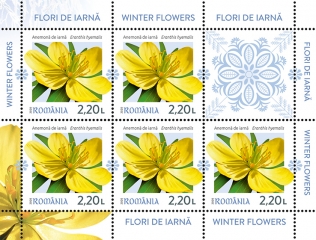 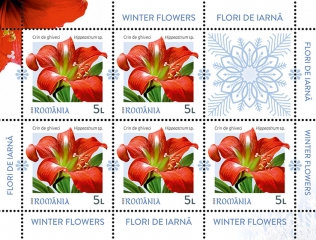 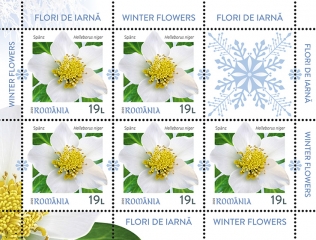 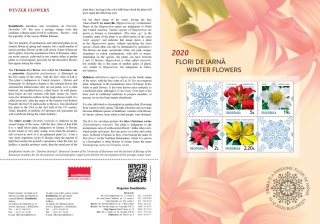 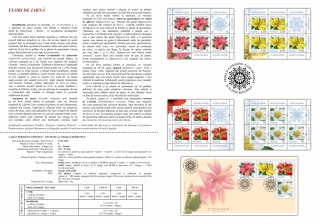 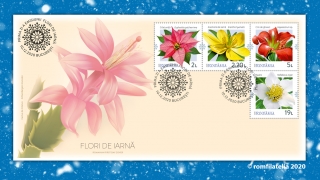 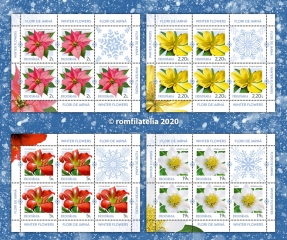 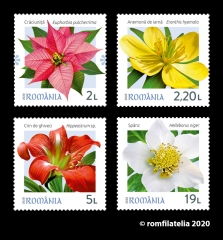 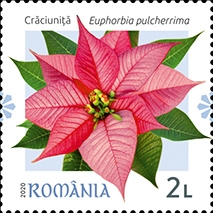 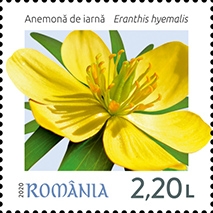 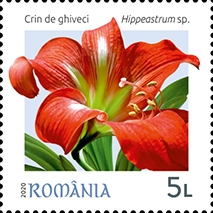 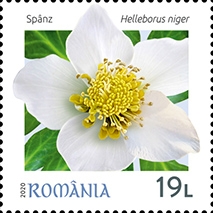