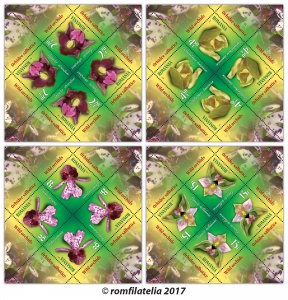 Gracious shapes and superb colours, this is what we think of when we hear the word “orchids”. We’re used to them as an exotic presence that we associate with distant tropical paradises, but Romania is also the homeland of several species of wild orchids. These orchids, few in number, about 70 different species, bloom on the hills and mountains of Romania from April to September. Some of them are extremely rare, most are threatened by expanding human activities, all being beautiful as a poem.

Epipactis atrorubens, illustrated on the stamp with the face value of Lei 2.20, in its popular name the Dark Red Helleborine is hardy and has a short, hairy rootstalk, often with multiple, fleshy roots. It blooms from June to July with inflorescences standing between 20 and 80 cm in height. The blossoms emit a strong vanilla scent, especially in warm weather. Although they sometimes vary in colour, they are generally reddish-brown, and they are often pollinated by insects, particularly bees. The fruit is a capsule, out of which the light, dust-like seeds are spread by the wind. A number of natural hybrids with other Epipactis species are known, like the hybrid with Epipactis Helleborine which produced Epipactis x schmalhausenii.

Epipactis atrorubens is widespread across Europe, and is found in the north to the subarctic, in the south to the Mediterranean, and in the east to Western Siberia and the Caucasus. The orchid grows at altitudes from sea level to 2400 m, but in Central Europe it has been in decline in recent decades. It is not, however, one of the most severely threatened species of orchid.

Cephalanthera damasonium (the White Helleborine), illustrated on the stamp with the face value of Lei 4.50, is a species of orchid which is widespread across much of Europe and the Middle East from England and Sweden to Russia and Iran; also Bhutan, India, Myanmar and Yunnan. It is the type species of the genus Cephalanthera. The flowers of this species hardly open, because they are autogamous (self-pollinating). This pollination means enables the White Helleborine to grow in deep shade, where the pollinators are almost absent.


Orchis purpurea, popularly known as the Lady orchid, illustrated on the stamp with the face value of Lei 8, is an orchid that can grow up to 100 cm tall. It has broad and oblong-lanceolate leaves up to 15 cm, forming a rosette at the base. The flowers in a rod assembly number up to 50 pieces, with a colour ranging from white to various shades of pink and purple.

This wild orchid grows in the sunny forests of Europe, North Africa and Turkey and blooms in April and May.

In alternative folk medicine, the part that is underground is used in cases of indigestion.

Epipactis Helleborine (the Broad-leaved Helleborine), illustrated on the stamp with the face value of Lei 15, grows to a height of 80 cm and has broad dull green leaves which are strongly ribbed and flat.

It is widespread across much of Europe and Asia from Portugal to China, as well as northern Africa. Eight varieties of Epipactis Helleborine in central Europe (Lower Silesia, Poland) had their nectar studied and they were found to contain naturally occurring oxycodone (as well as another narcotic like opioid) in minute amounts.


Romfilatelia thanks the management of the National Ceahlau Park, Mrs. Tatiana Onisei, biologist, and Mr. Michel Demares and Mr. Octavian Chende, photographers, for their documentary support granted in the creation of this issue postage stamp issue. 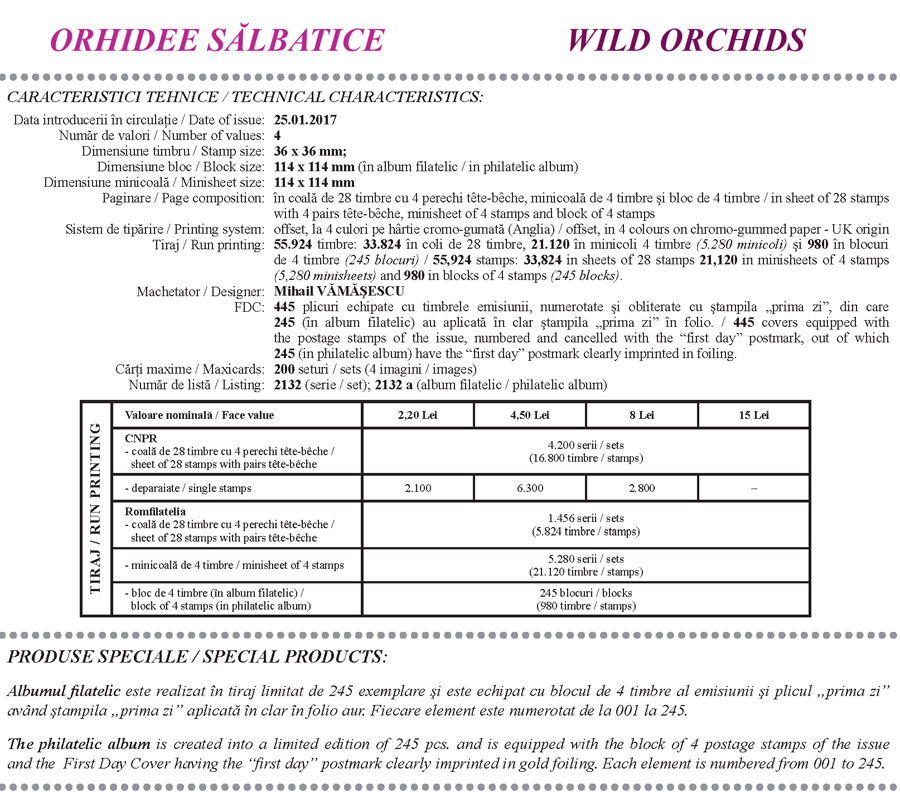