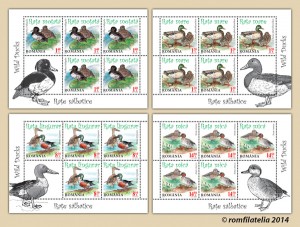 Romfilatelia resumes its series of projects dedicated to the Fauna theme that collectors appreciate so much, by introducing into circulation the postage stamps issue Wild Ducks.

The Mallard or Wild Duck (Anas platyrhynchos) is illustrated on the stamp with the face value of lei 1.20. It is a sedentary species, nesting and wintering in large numbers all over the Romanian territory.

It usually nests on the vegetation of rivers, ponds, and lakes banks and inside hollow willows, especially in the Danube Delta. It is the ancestor of the domestic duck.

The male mallard has a bottle-green head, and a white glossy collar, with a purple-tinged brown breast, and blue-violet wings bordered with two white bars each. The female is predominantly mottled with each individual feather showing sharp contrast from buff to very dark brown.

In summer, after moulting, the male has a similar plumage to that of the female, except from the breast which keeps a darker colour.

Even though there are hundreds of thousands of mallards, we cannot tell the exact number of pairs nesting inRomania. It was noticed that when fresh waters freeze, mallards from the Danube Delta move in big number towards the sea area, close to the shore.

The Tufted Duck (Aythya fuligula) is depicted on the stamp with the face value of lei 1.40.

In summer,Romaniahosts fewer tufted ducks than in winter. Most of the flocks have been observed in the seaside.

The tufted duck is medium-sized. The plumage of the male is glossy black on the head, jowl and back, to the tip of the tail. It has an obvious head tuft made of a few long feathers, feature that gives the species its popular name. Its eyes are yellowish, while the belly and body sides are white.

Most of the tufted ducks can be seen in winter, when they move to the sea area, near to the coast.

The stamp with the face value of lei 8.10 reproduces the Northern Shoveller (Anas clypeata), species found inRomania in large number in winter.

In our country, this species rarely stays in summer to nest.

The duck has a very developed beak, flattened at the top, this form giving the bird its popular name.

The plumage of the male is different from that of the female. It has a green head, white breast, the belly is white and the flanks of the body are chestnut coloured. On the back side of the feathers, they have a light-blue patch. The middle back is black, with a white border. The colours of white and chestnut can be easily observed on wings from a distance of 40-50 m. When it is observed in flight, the blue colour of the wing is visible to the female duck, its plumage being mostly mottled. This duck prefers shallow waters, where it finds food.

In small number, the pairs remaining in our country over summer are nesting in places with salty vegetation.

In spring and autumn, but also during winter, many Northern Shovellers gather in lagoon areas.

The Eurasian Teal or Common Teal (Anas crecca), presented on the stamp with the face value of lei 14.50, can be found in larger number in summer rather than in winter. It is the smallest-sized of the ducks known to live inRomania.

The male is recognized by its dark chestnut head, with a green stripe running from the eyes to the back head. When the wings are closed or shrunken, above them can be seen a horizontal white stripe. The tail is covered on each side by a yellowish patch. The plumage is mostly mottled, with green reflections.

This species of ducks fly in compact flocks, moving at high speed due to the very frequent flapping.

If during summer only few such ducks can be found on the Romanian territory, from mid-August they become more numerous, their number reaching tens of thousands in November, especially on the surface of large lakes, in the Danube Delta, and in the area of estuary mouths.

The first day cover illustrates the Mandarin Duck (Aix galericulata). It is native toChina and the Japanese islands, and was introduced toEurope in the 18th century as an ornamental bird, on lakes in parks. In time, it adapted to live outside parks as well, nesting in liberty in present. Over 1000 mandarin ducks are living inEngland today.

The female has a less spectacular plumage, the dark greyish brown colour being predominant, only the crop is white, with an eye white stripe.

The male draws attention through the diversity of colours of its plumage. The feathers are wide, with two orange “sails” at the back. In the same time, it has the lateral feathers of the head like chestnut colour whiskers, and a multi-coloured tuft. The species hasn’t been observed inRomaniaso far.

We thank the management of the National Museum of Natural History “Grigore Antipa” for the support and documentary advice granted in the accomplishment of this postage stamps issue. 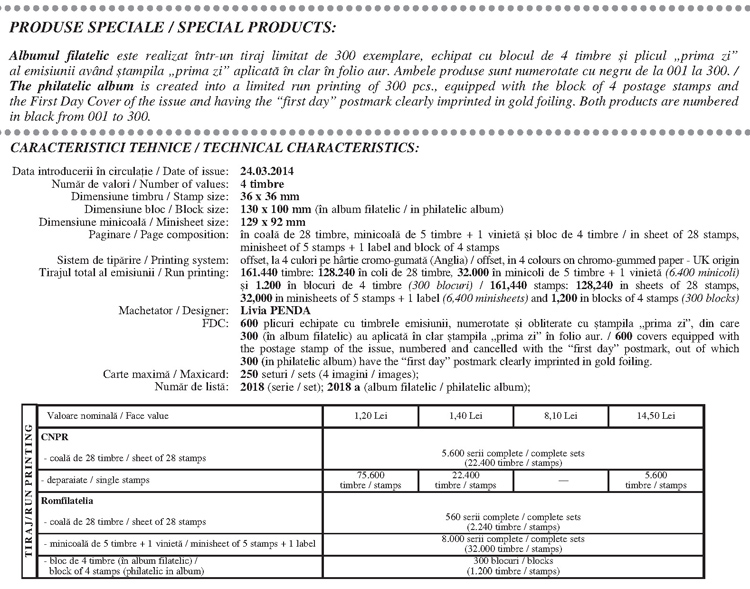