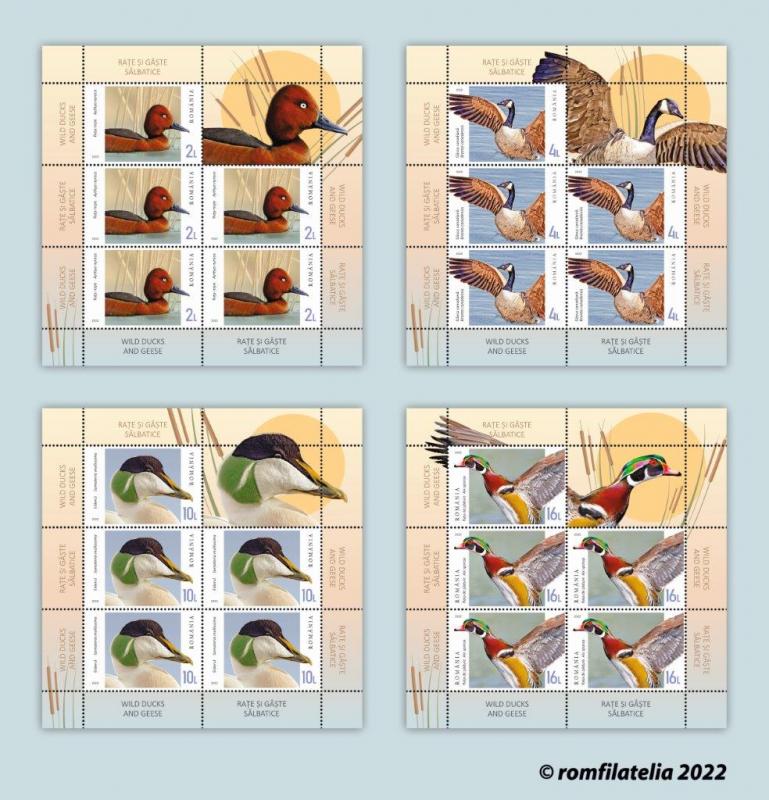 Always inciting people’s fascination, both through the colourful plumage and for the symbolism of returning in the warm period, the extremely varied species of wild ducks and geese, adapted to various habitats, are still of major interest to hunters, ornithologists and bird watchers.

Romfilatelia included in the current Issuing Program, the postage stamps issue “Wild Ducks and Geese”, a theme appreciated by collectors and the large audience, in general. The issue, consisting of four postage stamps, a perforated souvenir sheet, a First Day Cover and a set of maxicards for the passionates of maximaphily, will be introduced into circulation on Thursday, July 21st, this year.

In the postage stamps of the issue, the following species are depicted: ferruginous duck, Canada goose, common eider, wood duck. On the perforated souvenir sheet is illustrated the Magellan goose,
and on the First Day Cover is the image of a greylag goose.

Ferruginous duck (Aythya nyroca), represented on the stamp with the face value of Lei 2.00, is a migratory species that usually winters in southern Europe, around the Mediterranean and in Southeast Asia.
The area is vast and discontinuous, but in Europe the species is in sharp decline, so it has been classified with an unfavourable conservation status. The largest nesting population of the European population is in Romania. The ferruginous duck presents slightly pronounced sexual dimorphism, both sexes being generally nut-brown, with slight differences, lighter on the flanks and back. The light-coloured eyes of the male, being in obvious contrast to the plumage, are particularly striking.

Canada goose (Branta canadensis), illustrated on the stamp with the face value of Lei 4.00, is a species native to North America and winters in southern North America, including Mexico. It prefers open habitats, with a lot of short grassy vegetation. It can adapt to various altitudes and can often be seen feeding on cultivated land, becoming, in Europe, an alien, invasive species. It is a large-sized goose species with a long neck, massive beak and large legs. The sexes are similar, with no seasonal differences, the neck and head are black, the breast is lighter in colour and white on the underside of the belly. It distinguishes itself by a white spot on the chin.

Common eider (Somateria mollissima), depicted on the stamp with the face value of Lei 10, is a sea duck, from the Anatidae family, which lives in the Nordic countries, rarely arriving accidentally in the winter season in Romania. It is a large-sized duck, which can reach up to almost three kg, which is why it can be confused with a goose. It has a fairly fast flight, reaching speeds of up to 113 km/h. The common eider is distinctive for its robust shape and large wedge-shaped beak. The male is unmistakable, with its black-and-white plumage and green nape, and the female is brown.

Wood duck (Aix sponsa), represented on the stamp with the face value of Lei 16, is a small duck species, widespread in North America and Mexico, and in Europe it is an alien, invasive species. It builds its nest in tree hollows, prefers forested swamps, shallow lakes, areas that are covered by felled trees, shrubs, alders, marsh plants where it can hide and feed. The sexes have obvious sexual dimorphism, the males having a greenish-blue-purple head.
From the base of the beak two white lines run above the eye to the back of the head. They have red eyes, a rust neck and chest, grey sides and a black back and tail. Females have brown-greyish plumage with white rings around
the eyes.

Magellan goose (Chloephaga picta), depicted on the perforated souvenir sheet, having the stamp with the face value of Lei 32, belongs to the genus Chloephaga, a genus that includes a small group of five species of South American geese, with small beaks and beautifully coloured feathers. They are robust birds that feed on grass.The Magellan goose is widespread in southern South America and Tierra del Fuego,
close to the Strait of Magellan where it lives along the coasts and in grassy areas. It is characterized by a clear colour difference in the plumage of the two sexes: the head, neck and pectoral region, are a reddish-brown colour in females and white in males. The female closely resembles the red-headed goose, with which it is often confused. It mainly frequents grassy plains, semi-arid plain bushes, meadows and agricultural lands. The Magellan goose keeps its numbers unchanged, which is why it does not enjoy a special protection status on the International Red List. In December and January, many geese pounce on all feathers and can no longer fly for a period of time.

Greylag goose (Anser anser), illustrated on the First Day Cover, is also known as the big goose or the grey goose. From this species originates the domestic goose. It is a migratory species that arrives in the country
in February and leaves in November for North Africa. In late autumn they gather in groups, flying in a “V” or angle formation, the flocks being led by rotation by more experienced birds. Couples that nest on our lands preferthe Danube Delta and a few lakes in the south of the country. The plumage is grey-brown with white in the belly area and under the tail. The greylag goose is the largest species of goose in the country,
weighing up to four kg.