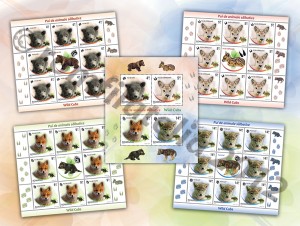 People share a common feeling of affection for cubs. Their kindness touches the sensitive parts of the human soul and the cubs raise a vivid curiosity for a little known and untamed universe.

Continuing the much appreciated theme on fauna, Romfilatelia is introducing into circulation a new postage stamps issue – “Wild cubs”.

On the postage stamp with the face value of 4.30 lei is illustrated the brown bear cub (Ursus arctos).

This is an animal with a huge adaptation capacity to different habitats from plain to forests and subalpine areas. It prefers not only the mountainous forested areas hardly accessible with fallen trees or rocks, but also the hill areas rich in fruit trees gardens. In the cold months, the Carpathian bears withdraw to the rocky areas hardly accessible to the humans, in caves or holes dug into the earth to hibernate.

The bear cubs are born at the end of winter and they do not leave the den for two or three months, feeding on their mother’s milk. They stay together with their mother until they are two or three years old in order to learn the life into the wild. Reaching maturity, they leave to look for their own territories. A bear family is made up of the female bear and her cubs while the male always lives in isolation.

On the postage stamp with the face value of 5.00 lei is illustrated the deer cub (Capreolus capreolus).

The deer is an animal that easily adapts to the environment, for which reason we may find it in various habitats. It prefers the forested areas with plenty of vegetation from the plain up to the sub-Carpathian forests. The deer live alone or in small groups made up of a female and her cubs, but in winter they get together in herds of 20-40 members.

The deer cubs are born at the beginning of summer and they have horizontal white spot stripes on their body that help them hide into the tall grass. These stripes shade away when they are about 2 months old. The cubs grow fast and they may be weaned when they are 2-3 months old, but they stay together with their mother until she gives birth to another generation the following year.

On the postage stamp with the face value of 9.10 lei is illustrated the fox cub (Vulpes vulpes crucigera).

In our country, foxes live mainly in Campia Romana, Dobrogea, the sub-Carpathian hills and Bucegi plateau. Foxes prefer the wild areas rich in vegetation as well as forests and tundras where the human presence is scarce.

The fox is a nocturnal and solitary animal. It sleeps during the day and comes out of the den at night to hunt. When it is hungry or it must feed its cubs, the fox has to hunt during the day as well to get food.

The fox cubs are born in spring and they feed only on their mother’s milk for four weeks. In this period, the mother guards her cubs, feeds and defends them and their father hunts to provide his family with food. Starting with the second month of life, the cubs accompany their parents at hunting and they start learning the first survival lessons: what animals they must avoid, how to smell out prey and how to hunt or eat. After about six months, in autumn, the cubs are ready to leave their family in order to find their own territory and form their own family.

On the postage stamp with the face value of 14.50 lei is illustrated the wolf cub (Canis lupus).

The wolf is an exclusively night animal, but a sociable one, living in packs that may number 20-30 members in winter. The allegiance to a pack makes them become stronger or fiercer. Only the young wolves live in solitude looking for a territory. They prefer the mountainous forest areas from the sub-Carpathian areas, but they also come down to the hill regions or the deep ravines with thorn bushes hardly accessible to the humans. The wolf is a nomad animal since it permanently changes its territory.

The wolf cubs are born at the beginning of summer and they do not leave the den until they are about four weeks old, and in this period they feed only on their mother’s milk who never leaves them alone. The cubs grow together in the pack and all the pack members engage in their protection and nurture. After a couple of months, the cubs start learning how to hunt and they are able to manage themselves after less than one year since their birth. Some cubs stay with the pack for many years and others leave it to look for their own territory and make their own pack.

We kindly thank the “Grigore Antipa” National Museum of Natural History for the documentary support granted in the accomplishment of this postage stamps issue.
Issue date: 2012-12-07 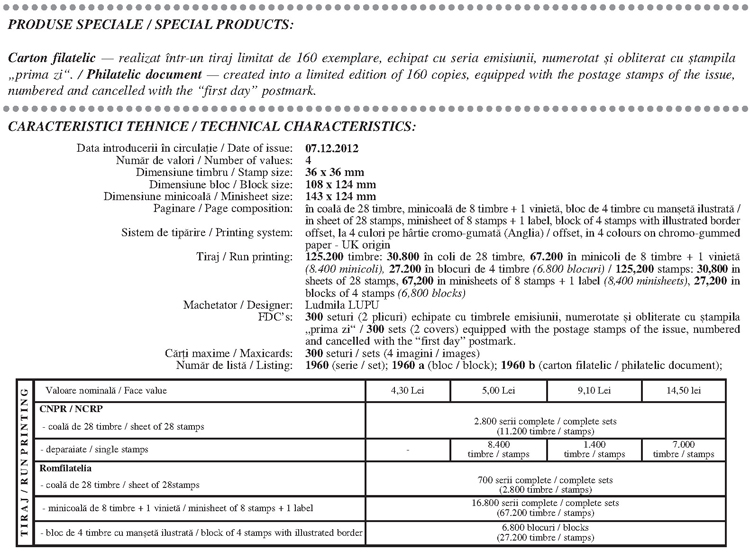