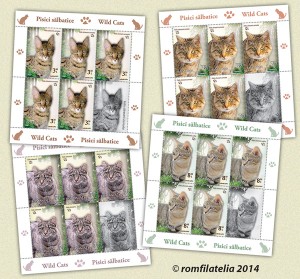 Romfilatelia resumes the theme dedicated to felines through the new postage stamp issue Wild Cats, a joy fest for both philatelists and wildlife lovers.

The Wild Cat (Felis Silveris) lives in countries from Europe, Africa, the Middle East and Asia, knowing a variety of subspecies characteristic to different geographical zones. Bigger than the domestic cat, this wild relative has longer legs and a more robust body. It is believed that the domestication of the wild cat occurred 9,000 to 10,000 years ago, the animal being mainly used to protect crops from rodent mammals that were harmful to agriculture.

On the stamp with the face value of lei 3.30 is illustrated the Abyssinian Cat (Felis silvestris ocreata). It lives on a spread area from Africa to Asia Minor. Its coat consists of long, uniform hairs, a light gray colour with black spots on the back and sides of the body. The dark colour of the chin, chest and limbs contrast with the shades of red or yellowish-brown. The colour variability depends on the habitat where it lives, the desert being its characteristic home.

On the stamp with the face value of lei 3.60 is depicted the image of the Asian wildcat (Felis silvestris ornata). It is found on a large geographical area, from the Asian mountains down to the plains of India. The colour of the Asian cat depends on its habitat, ranging from the yellowish colour of the sand to gray and reddish. Precisely because of this wide variability of the coat color, there are many subspecies within its group. It is a small mammal, reaching a maximum weight of 4 kg. Its alimentation, according to its habitat, is varied, consisting of birds and their eggs, small rodents, reptiles and insects.

In Romania, we meet the Wild Cat (Felis silvestris), from the Danube Delta to the mountain border of forests. This one is depicted on the stamp with the face value of lei 7.60. It is a species wide-spread in Central and Southern Europe. It prefers especially river valleys and patches of lowland in hardwood forests where food (rodents and birds) can be easily found. The length of the head and body can reach 91 cm; the ears measure between 60-70 mm and its average weight is between5-7 kg.

A black, transversal stripe starts on the shoulders, tapering and fading out towards the limit of the abdomen. The color of the tail is similar to the fur on the back, being interrupted by alternating black rings. The tip of the tail is also black. The front feet are yellowish-gray on their outer side and cinnamon-blackish below. Hunters know that females are somewhat grayer than tomcats.

The wild cat is a nocturnal animal, good swimmer, but when possible, it avoids going into the water. It cannot be tamed in captivity.

On the stamp with the face value of lei 8.10 is illustrated the South African Wildcat (Felis silvestris cafra), one of the five subspecies of the wild cat. Its main feature is the reddish-brown colour on the back of the ears, belly and legs. The body has vertical stripes, which can be more or less pronounced. All along the tail, it has black rings, and the tip of the tail is completely black. The chin and chest are white, and the face is usually lighter than the rest of the body. Compared to the legs of the domestic cat, the ones of the South African cat are longer. The head is small, broad, rounded, and the muzzle is short. The length of the body varies between 85 and 100 cm, weighs between 2.5 and 6 kg, and can live up to 12 years. A nocturnal animal, its activity begins only at dusk. Its diet consists mainly of rodents, but also eats insects, small reptiles and birds.

Romfilatelia thanks Corresponding Member Acad. Dr. Dumitru Murariu and photographer Silviu Matei for the documentary and photographic support granted in the accomplishment of this issue of postage stamps. 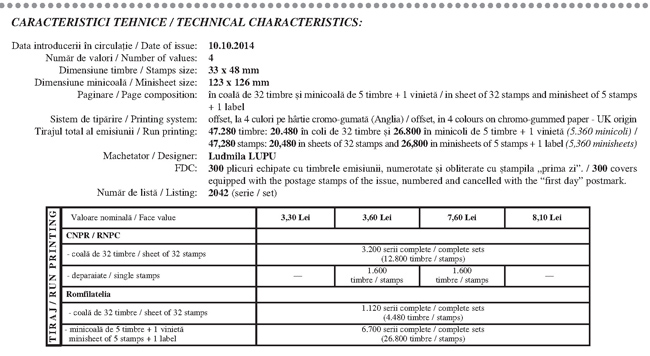