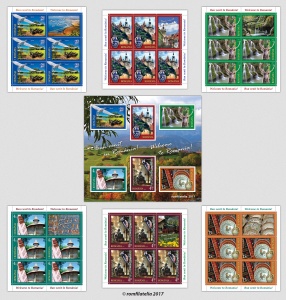 One of the most beautiful countries in Europe, Romania offers countless unique travel experiences that are waiting to be discovered. The words that best capture the essence of Romania are authentic, natural and cultural, being a dynamic country rich in history, arts and scenic beauty.

Romfilatelia, true to its motto “a world in a stamp”, invites connoisseurs to take an imaginary trip through our country.

Through this postage stamp issue we invite you to explore Romania’s many architectural treasures and experience its vibrant and flourishing cultural patrimony.

We look forward to welcoming you to Romania!

The stamp with the face value of Lei 2.50 reveals a landscape from the Danube Delta. It was incorporated into the UNESCO World Heritage Site in 1991 as the Biosphere Reserve, comprising one of the world’s largest wetlands with over 400 lakes, oak and ash forests, sand dunes and wild beaches on the deltaic seaside. This is home for the Small Egret (Egretta garzetta), a species half the size of the Big Egret, with faster beating wings. It nests in fresh, brackish or saline wetlands and shows a preference for shallow waters where fish are concentrated in pools or at the water’s surface.

The stamp with the face value of Lei 2.70 depicts the Clock Tower in the town of Sighisoara, the most massive of the nine defence towers that have been preserved up to now. The whole city, one of the few medieval citadel towns still inhabited, appears to the visitor as an open-air museum, its exhibits, charming by the atmosphere they create together, attracting hundreds of thousands of tourists year after year. It is paired with Transylvanian Saxon pottery, which stands out by its ornamental details, in a generous repertoire of decorative elements.

The stamp with the face value of Lei 3.50 illustrates the Bigar Waterfall, which is part of a protected area, located in Caras-Severin County, Bozovici commune. Its source spring is a strong one, fed by an underground watercourse that runs through the Anina Mountains. After about 200 m, the spring water (rich in limestone) flows into the Minis River from a rocky threshold, forming a spectacular waterfall.

The beauty of this area is represented by the majestic Carpathian red deer, which can be found in areas with extensive forests, rich in food sources.

The stamp with the face value of Lei 4 shows the Voronet Monastery, a medieval monastery from Gura Humorului town. Often known as the “Sistine Chapel of the East”, the frescoes at Voronet feature an intense shade of blue known in Romania as “Voronet blue.” It is one of the famous painted monasteries from Southern Bukovina, in Suceava County. The monastery was constructed by Stephen the Great in 1488 to commemorate the victory at the Battle of Vaslui. Alongside the monastery we find the Romanian blouse with a patter specific to the Suceava region. To achieve the Romanian blouse, materials are carefully chosen and the placement of each model is strictly established. The trim, colours and materials from which a Romanian blouse was made would represent a social label of age, civil and marital, religious and regional status.

The stamp with the face value of Lei 4.50 shows of the Mocanita and the splendid décor through which it makes its way. A mocanita is a narrow-gauge railway in Romania, found most notably in Maramures, Transylvania, and Bukovina. Archetypely, they are situated in mountainous areas and the steam locomotives operating on them can also be referred to as mocanitas. These railways were built for cargo and passenger services (before 1920) but fell into disrepair over the years. Some are now being rehabilitated for the purposes of tourism, offering travellers a chance to take a trip through the mountainous nature. One of the most beloved birds by children, also the most recognizable, even when riding a train, is the middle spotted woodpecker, a.k.a. “the forest doctor”.

Horezu ceramic making, inscribed in 2012 on the UNESCO Representative List of the Intangible Cultural Heritage of Humanity, is a unique traditional craft. Handmade in the northern part of Valcea County, Romania, they reflect generations of knowledge and craftsmanship. Men select and extract the earth, which is then transformed into a clay body from which the potters of Horezu produce a red pottery. The women decorate the objects using specific techniques and tools to draw traditional motifs. Their skill in combining decoration and colour defines the personality and uniqueness of these ceramics, illustrated on the stamp with the face value of Lei 15.

Alongside the Horezu pottery we have a traditional hand-woven rug whose colour and pattern is specific to the area of Oltenia.

Romfilatelia thanks the photographers George Avanu, Ioana Chirita, Constantin Dina, Valeriu Leonov, Silviu Matei, Daniel Petrescu and Lucian Tudose for support given for the creation of this postage stamp issue. 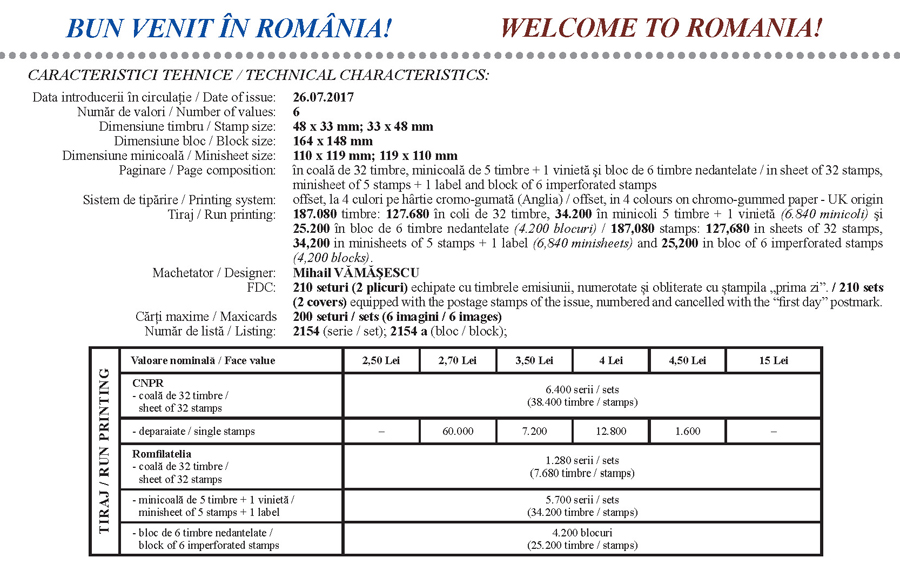