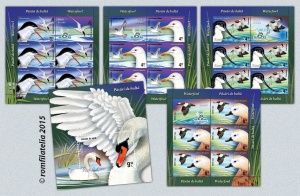 Preserving the tradition of philatelic projects dedicated to Romanian wildlife, Romfilatelia created a new postage stamp issue with the Waterfowl topic.
The postage stamps illustrate five bird species adapted to living in the environment of wetlands: the common tern on the stamp with the face value of lei 3,30, the yellow-legged gull on the stamp with the face value of lei 4,30, the pied avocet on the stamp with the face value of lei 4,70 and the ruddy shelduck on the stamp with the face value of lei 8,10 and on the souvenir sheet the mute swan can be found.
Waterfowl, tireless travelers who roam the shores of all continents in search of food and a favorite place to nest, are impressive in their amazing flight and gave rise to the admiration of viewers. In the air, their wingtips can reach the water or they can go up to more than six kilometers. They are accomplished masters of flight, reads the book Shorebirds – Beautiful Beachcombers by Arthur Morris.
The common tern (Sterna hirundo) is characteristic of coastal wetlands and freshwater inland lakes. Its body shape is elongated, with a black crown and the rest of the face and ventral parts being whitish-gray. Its back and wings are gray, the beak is red with a dark tip, which turns completely black in the winter. It feeds on fish, insects and snails.
These graceful birds can be found in the northern areas of their habitat between April and October, after which they migrate south to warmer climates during the winter.
The yellow-legged gull (Larus michahellis) is a sedentary bird found near ponds, lakes and along the coastline. It appears on the sea shores, or on different islands, colonies existing that populate regions of Switzerland, Austria, Slovakia, Germany, Britain, Poland and other countries.
The yellow-legged gull is defined by the colors gray-silver, white, black and yellow. The differences between it and the silver gull are its feet, where the yellow-legged gull has a yellow color, and the silver gull is pink. Under the beak a red spot can seen. The yellow-legged gulls length is of 55 – 65 cm, its wingspan of 1.3 to 1.5 m and it weighs 750 – 1200 g.
The food consists of fish and various aquatic species they catch in flight, directly or by shallow diving. The yellow-legged gull nests on wide beaches and cliffs, when it nests on the beach, or on buildings, for pairs who rear their chicks in urban areas.
The pied avocet (Recurvirostra avosetta) is a bird specific to the coastal areas, salt water lagoons, deltas and marshes, swamps and shallow lakes. It has a smooth, thin, black beak, curved upward. The legs are long and the body reaches 46 cm. In Romania it can be found in the Danube Delta, on the shore and near coastal lakes.
The size of a dove, it is a social species that roams in flocks and nests in colonies. Their synchronization within a flock is impressive, simultaneously executing rapid maneuvers. They are loud and combative, chasing away potential predators from the vicinity of the colony. The nests are scant, formed in a recess in the sand and lined with plant debris and shells.
The ruddy shelduck (Tadorna ferruginea) is a migratory bird, widespread in Central Asia, but less so in Europe. In Romania it is rare, preferring isolated lakes, possibly with islands, away from human presence.
Due to its beautifully colorful feathers, the ruddy shelduck is kept as an ornamental bird. The general color of the plumage is reddish with lighter shades towards the head. The female has a white head and on the male one can see a thin black collar. The body length is of 58 – 70 cm, the wingspan of 1.1 to 1.35 m and a weight of 1.2 – 1.4 kg. The female is smaller than the male.
The ruddy shelduck builds its nest similar to the shelduck, in burrows, crevices among rocks or in tree hollows.
The mute swan (Cygnus olor) lives in freshwater or saltwater areas: lakes, ponds, rivers, coastal waters, lagoons, estuaries, swamps. Often it can be found in urban areas. It gathers in large groups, where often violent territorial battles occur, the intruders being removed by the dominant males through ,,slides” on the water, jumps and pounding the water with its wings.
It is recognized by its white ,,S-shaped” neck, its red-orange beak, black legs and the habit of arching its wings over its back. It does not sing, but during flight its wings produce a musical rumble that can be heard from afar. It feeds on roots, herbs, seeds, worms, insects, mollusks and small fish sometimes.
In Romania it returns in the warm season and nests more readily in the Danube Delta and the Razim-Sinoe lagoon complex as well as in some large ponds in the lowlands.

We thank the Romanian Ornithological Society as well as photographers Bogdan Ciungara and Daniel Petrescu for the support given in the accomplishment of this postage stamp issue. 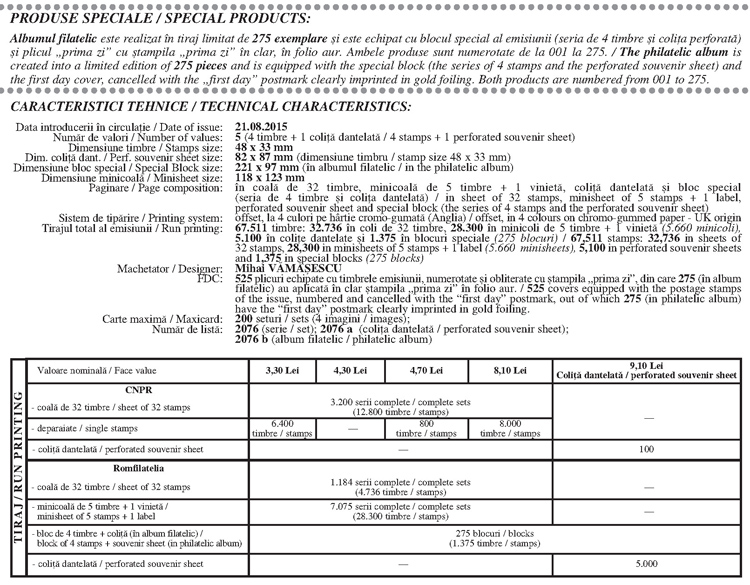