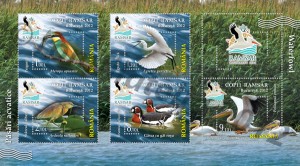 41 years ago inIran, on the coast of the Caspian Sea, in the town of Ramsar, the Convention on Wetlands of International Importance, especially as Waterfowl Habitat was signed on February 2nd and it was ratified by Romania in 1991.

The document is one of the first large international conventions relating to the preservation of the world natural heritage.

Starting with 1997, the World Wetlands Day is celebrated worldwide on the 2nd of February.

The main goal of the Ramsar Convention is to preserve wetlands, flora and fauna agreeably intertwining in the waterfowl habitat. Moreover, the preservation of these areas is necessary because they are important resources with economic, natural, scientific and recreational value. In June 2012, the Ramsar list of international importance wetlands includes more than 2,000 areas in 162 countries having signed the Convention.

Romania is a country enjoying a great biodiversity, the surface of all protected natural areas accounting for approximately 23% of the country surface. As a matter of fact, the List of Ramsar Sites includes eight wetlands belonging to Romania: the Danube Delta Biosphere Reservation, the Small Island of Braila, the Iron Gates Natural Park, the Comana Natural Park, the Mures Floodplain, the Poiana Stampei Peat Bog, the Dumbravita Fishpond Complex and the Techirghiol Lake.

During 6-13 July, the 11th Meeting of the Conference of the Parties to the Convention on Wetlands of International Importance, especially as Waterfowl Habitat (Ramsar COP11) will take place in Bucharest, on which occasion Romfilatelia introduces into circulation the postage stamps issue “Waterfowl” consisting of five postage stamps.

The postage stamp with the face value of 1.00 lei illustrates the European Bee-Eater (Merops apiaster), a richly coloured bird with a plumage combining colours such as red, yellow, green, blue and black. These birds live in open, sunny areas and nest on loamy banks. Its favourite food consists of insects (dragonflies, bees or wasps), which it catches flying. It is usually known as the Bee-Eater. In the Danube Delta, several large colonies of Bee-Eaters can be found in Sulina, Letea and Sfantul Gheorghe.

The Little Egret (Egretta garzetta), illustrated on the postage stamp with the face value of 1.20 lei, is a white bird with an elegant shape and a black, elongated beak. Its back is decorated by a bunch of ornamental feathers that grow during the breeding period. The Little Egret lives mainly in the Danube Delta area, in mixed colonies.

The Squacco Heron (Ardeola ralloides), illustrated on the postage stamp with the face value of 2.10 lei, is a bird having the size of a stork and its plumage is yellow, with reddish and grey shades. It feeds on insects and also on fish and lives in the summertime in the Danube Delta and in large pools, joining mixed colonies.

The postage stamp with the face value of 8.10 lei illustrates the Red-Breasted Goose (Branta ruficollis), whose plumage combines black and white on the neck and head areas with an extremely beautiful reddish-brown colour. In our country it lives during winter and can be seen on pools, lakes and water streams near the Delta. It migrates to the Northern Europe and leaves for Siberia.

The Great White Pelican (Pelecanus onocrotalus), illustrated on the postage stamp with the face value of 9.10 lei, is a large-sized, heavy ground bird, but it has very good swimming and flying abilities. Its plumage is pinkish-white at maturity and it has a long beak with a gular pouch. It is an ichthyophagous bird and gets its food in groups, sometimes together with cormorants. Pelicans live during the summer in large colonies, in Danube Delta areas difficult to access. In autumn they migrate to the Nile Delta or the Asian coasts.

We would like to thank the Ministry of Environment and Forests, to the National Museum of Natural History “Grigore Antipa” and to the photographers Daniel PETRESCU, Peter LENGYEL, Alexandru ORBESCU for the documentary support granted in the accomplishment of this postage stamps issue. 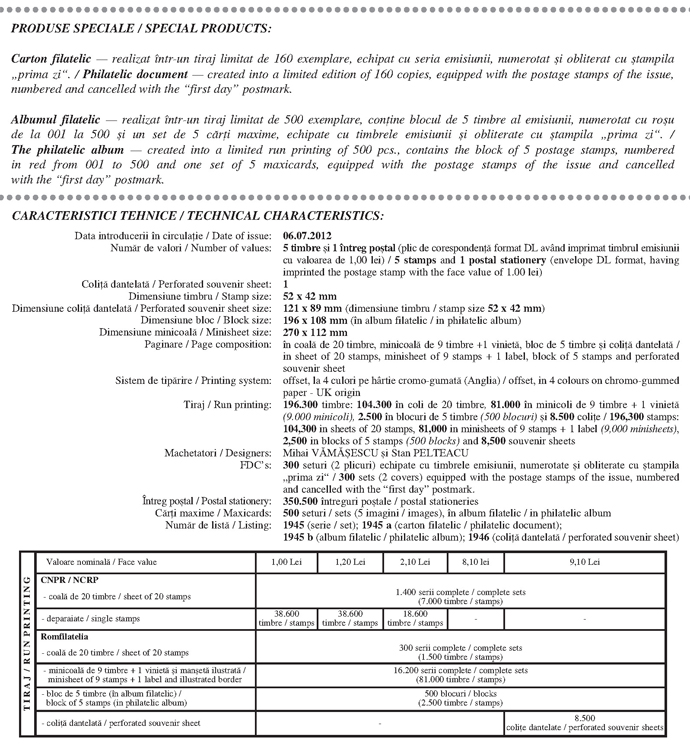