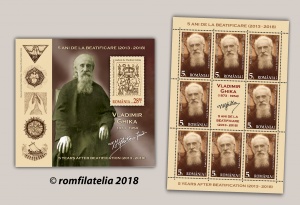 On the occasion of the fifth celebration of the beatification of Monsignor Vladimir Ghika (1873-1954), by the Roman Catholic Church, Romfilatelia introduces into circulation a commemorative postage stamp issue dedicated to the monk-prince’s martyrdom. On the stamp of the issue, with the face value of Lei 5, a portrait of the Blessed Vladimir Ghika, performed during a mission in Japan (1933), is illustrated. On the perforated souvenir sheet of the issue, with the face value of Lei 28.50, another picture of the Blessed was reproduced. The stamp of the souvenir sheet is a postage mark designed by Vladimir Ghika, in 1918, containing heraldic elements of the historical regions of Greater Romania.

Vladimir Ghika was born on December 13/25th, 1873, in Constantinople, where his father was on a diplomatic mission. The Ghika family had aristocratic origins, Vladimir being the grandson of Grigore V. Ghika Voda, the last Ruler of Moldavia. The young prince was baptized and oiled in the Orthodox Church, according to the family tradition.

Blessed Vladimir Ghika lived most of his life outside Romania. His intellectual training and education took place in France, where he settled in 1878, after his father, Ion Ghika, had been appointed minister of Romania in Paris. Vladimir Ghika graduated from the high-school, the Law School and the School of Political Science in Toulouse. He was very close to his brother Dimitrie, a career diplomat, whom he followed in all diplomatic missions.

In 1898, Dimitrie was sent by the Romanian Ministry of Foreign Affairs to Rome, an opportunity for Vladimir to come close to Catholicism. He made the profession of Catholic faith at “Saint Sabina” Church in Rome on April 15th, 1902. He later studied at “St. Thomas Aquino” College, obtaining a Bachelor’s degree in scholar philosophy and a Ph.D. degree in Theology. Vladimir Ghika also researched the Vatican archives and transcribed documents of interest to Romania, at the request of the Government of Bucharest.

In 1906, Vladimir Ghika returned to the country, contributing to the founding of several charity establishments in Bucharest, together with the Sisters of the Daughters of Charity of Saint Vincent de Paul Congregation: the free “Bethleem Mariae” Dispensary from Calea Grivitei, “Saint Vincent de Paul” Sanatorium etc. Also, together with the Daughters of Charity took care of the cholera patients at Zimnicea. During this longer stay in Romania, he also had a rich intellectual activity, publishing historical articles, based on the family archives, in the publications Convorbiri Literare (Literary Talk, in English) and the Catholic Magazine.

During the World War I, Vladimir Ghika moved to Rome, along with his brother Dimitrie, who had been named ambassador. Romania did not have an official representation near the Holy See, and by his prolific work, Vladimir Ghika was a kind of ambassador to the Vatican. The two brothers constituted a double embassy of Romania: Dimitrie – the King’s Messenger, Vladimir – the God’s Messenger.

Since 1917, Vladimir Ghika has been involved in setting up some Romanian regiments in Italy, made up of Transylvanian prisoners of war. The following year, the Monsignor participated in the lobbying activities initiated by the National Council of Romanian Unity, based in Paris. On September 28th, 1918, Vladimir Ghika was officially appointed by the Council to represent Romania in relation to the Holy See. In this capacity, he informed the Holy Father the news of the Great National Assembly in Alba Iulia on December 1st, 1918. In Rome to represent the union interests, Vladimir Ghika also made some thematic drawings, including stamp projects containing the heraldic elements of the Romanian historical regions and an emblem of the National Council of Romanian Unity, which was represented symbols of the new regions joined to the Kingdom of Romania, namely Transylvania, Bessarabia and Bukovina. This emblem is on the First Day Cover of the postage stamp issue Vladimir Ghika, 5 years after beatification.

After the war, Vladimir Ghika dedicated his life to the church, having a rich missionary activity, all over the world. Even though he was officially the Pope’s messenger, the locals knew he was a Romanian prince, an association that contributed to the fame of the country.

In 1939, after the outbreak of the World War II, Vladimir Ghika decided to stay in Romania. He served daily the liturgy in his apartment in Dacia Boulevard in Bucharest, and the processions began to be very popular, his dwelling becoming scanty. The Monsignor used to pay visits to the homes of sick people, where he sometimes held the liturgy and prayed with them. He often went to hospitals (Central Hospital, Philanthropy Hospital, Pantelimon Tuberculosis Hospital, Coltea Hospital), but also in orphanages or prisons. During the war, he visited the wounded and dying people admitted to “Saint Vincent de Paul” Sanatorium.

After the World War II he continued his missionary activity, which is why he came into conflict with the communist authorities. During this period he had meetings with personalities from the Orthodox world, including Dumitru Staniloae, Sandu Tudor, Ernest Bernea etc.

In January 1948, Vladimir Ghika refused to leave by the Royal train in exile, having to withstand the repression of the regime. He was no longer allowed to serve in the French Church in Bucharest, he was forbidden to visit the believers’ home, and eventually was evacuated from his dwelling in Dacia Boulevard. He moved to “Saint Vincent de Paul” Sanatorium, and then to the parish house of Lazarists priests.

On November 18th, 1952, Vladimir Ghika was arrested on the street, accused of not interrupting ties with the Vatican. He refused the court-appointed lawyer, preferring to defend by himself. Following the trial, he was sentenced to three years in prison, being imprisoned at Jilava. After a lifetime in the service of God and the nation, Vladimir Ghika passed to the Lord on May 16th, 1954, at the age of 81, in Jilava Prison.

In November 1991, His Eminence Ioan Robu, Metropolitan Archbishop of Bucharest, submitted to Rome the document Nihil obstat, to begin the recognition of the martyrdom of Monsignor Ghika. The procedure was completed in March 2013, when the Holy Father promulgated the decree of recognition of the martyrdom, and Vladimir Ghika received the title of venerable. In July of the same year, the earthly remnants were re-buried at the “St. Joseph” Cathedral in Bucharest. The beatification of Blessed Vladimir Ghika ended on August 31st, 2013, through an impressive ceremony held in Bucharest.

To celebrate the complex personality of Blessed Vladimir Ghika, the Romanian Academy appointed him a post-mortem member on November 5th, 2013.

Romfilatelia thanks Monsignor Miguel Maury Buendía, Apostolic Nuncio in Romania, His Eminence Ioan Robu, Ph.D. and the Roman Catholic Archdiocese of Bucharest, Vladimir Ghika Archives of the Roman Catholic Archdiocese of Bucharest, Mrs. Anna-Mária Orbán from the National University of Arts in Bucharest, and Mr. Emanuel Cosmovici from “Bunavestire Programs” in Bucharest, for the documentary and photographic support granted for the achievement of this postage stamp issue. 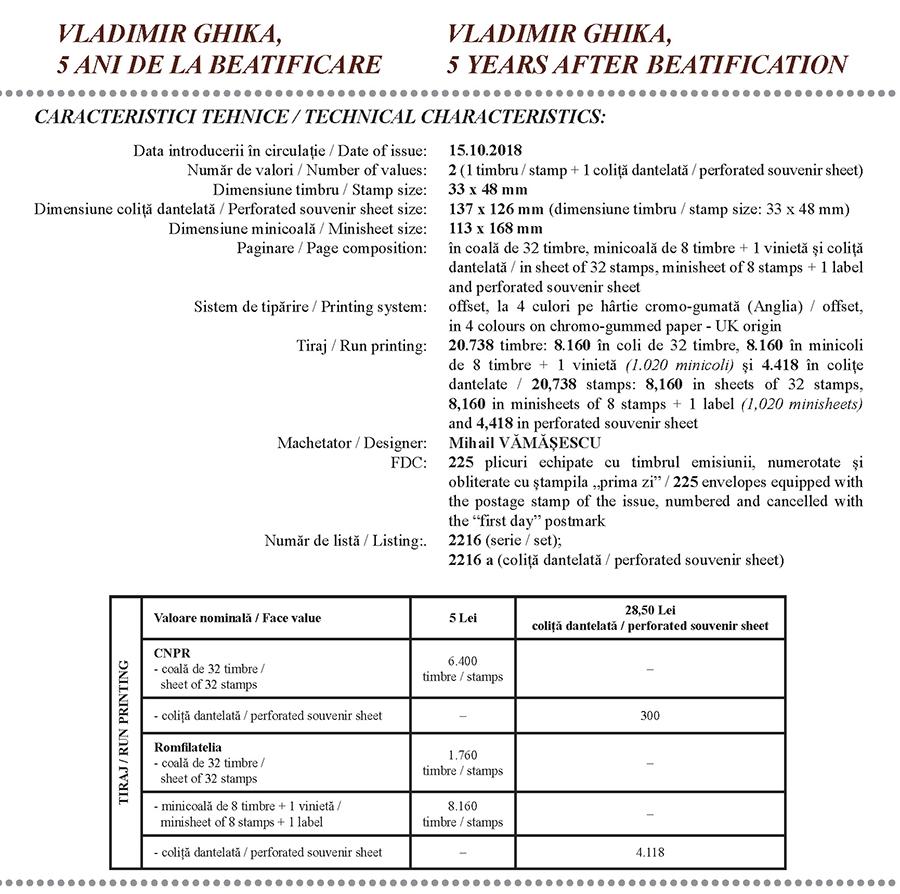