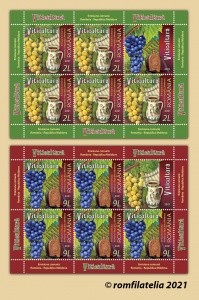 The two postage stamps introduced in circulation will illustrate the following landmarks:

The stamp with a face value of lei 2 brings together in a unitary graphic the image of a painted cup that was made by the craftsman Colibaba Constantin, in the Radauti Urban Workshop, Suceava County, and of a bunch of Zghihara grapes from Husi region, Romania.

This painted cup is part of the patrimony of the National Museum of the Romanian Peasant and has as dating: 3/4 sec. XX, probably the year of the 1974 acquisition. The piece is tall, circular, with a beak and handle. The decor is arranged in three ornamental registers, at the base is a register painted with a geometric motif consisting of bicolor concentric triangles (mustard yellow and green) alternating with groups of lines and leaves, on the body of the cup the decor is composed of three areas with naturalistic motifs and namely: a rooster with a leafy branch, central sun and two crescents with a star and on the other side is arranged a horse with a rider holding a sword in his right hand, and the neck of the cup is decorated with five yellow flowers and above them a belt with semicircles that are alternately chromatic (green, brown and mustard yellow).

The name of the craftsman “Colibaba” is engraved on the bottom of the cup. The inside of the cup is glazed with colorless glaze.

The Zghihara grape variety is known for many centuries before the destructive enemy of the vine, Phylloxera, appeared. In the time of Stephen the Great, it was known as the source of an ordinary man’s wine, a pleasant wine, often found at traditional weddings in Moldavia. At present, the variety is found only in the Husi area. The name Zghihara is of Turkish origin. It is considered one of the most productive local varieties. Starting from Zghihara wine, vine growers in Husi region created a sparkling wine that obtained very good appreciations at international competitions. Along with the sparkling wine, Husilor vineyard launched the brandy that bears its name. In the scholarly literature, the variety is also found under the synonymous names of Zghihara galbena (in free translation, Yellow Zghihara), Zghihara verde batuta (in free translation, Washout Green Zghihara), Poama zosaneasca (in free translation, Husi Zonal Fruit). Laudatory opinions regarding Husi wines can be found in the writings of Petru Rares, Ioan Voda cel Cumplit, Alexandru Lapusneanu, Bogdan Petriceicu Hasdeu, Nicolae Iorga, Mihail Sadoveanu and others.

On the stamp with a face value of lei 9 is reproduced a Flask made by the folk craftsman from the Republic of Moldova, Victor Pelin and the bunches of a grape variety representative for Moldova, Rara Neagra. It is a kind of wine grape, very old, known since the Geto-Dacian period. The wine from this grape variety was among the favourite wines of Stephen the Great. It is cultivated in Romania, the Republic of Moldova, Ukraine, the United States of America and is known under about 80 different names. In the Republic of Moldova, it is cultivated in vineyards along the Dniester River, predominantly in Purcari vineyard, and bears the title of “national variety”. It ranks 4th among the indigenous varieties by area and represents 102.0 ha. Rara Neagra reaches full maturity in the second half of September. It has large yields, of 20 t/ha and even more, the production of a vine stock varying between 3.5 to 9 kg. Due to its high acidity, Rara Neagra is used to obtain rosé and red sparkling wines, unique in taste and flavour. It is often used in blends with classic varieties, but also with local varieties such as Feteasca Neagra. In the past, in Moldova, there was a custom of walking with the wine flask through the village to invite guests to the wedding. If the man intended to come, he drank wine from the flask. At present, the flask is a real treasure carved in wood, handcrafted made by folk craftsmen, used, for the most part, to decorate homes, pubs, etc.

Romfilatelia thanks the S.E. “Posta Moldovei”, the National Museum of the Romanian Peasant and the “Dimitrie Cantemir” Agricultural College Husi for the documentary and photographic support granted in the development of this joint stamp issue. 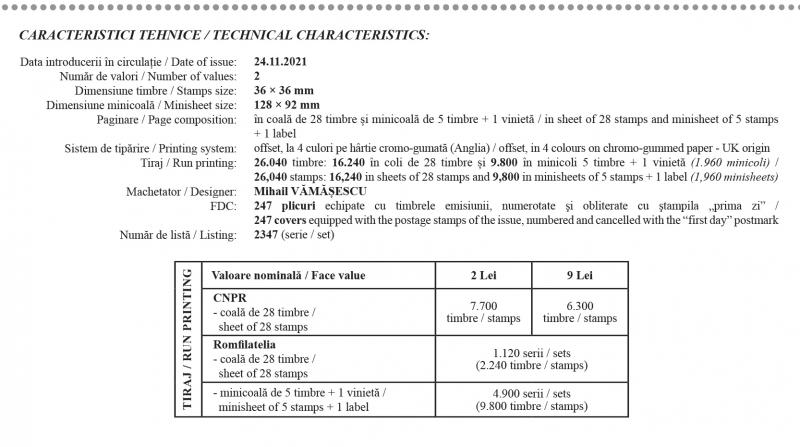