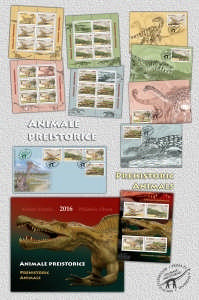 70 million years ago, the territory that is today Tara Hategului was part of a tropical island in the Tethys Ocean – Pangaea, which was populated by an exotic association of prehistoric animals. Over the years, the remains of these animals were preserved in the rocks of Tara Hategului, while archaeological researches brought to light numerous sites with bones of crocodiles, turtles, mammals, flying reptiles or birds, as well as a large number of fossils of dwarf dinosaurs, herbivores and carnivores, unique in the world.

Romfilatelia invites you to an imaginary journey through the fascinating history of these prehistoric animals and offers to the general public its latest project, with an eponymous title – Prehistoric animals. Available for purchase starting from Friday, January 22nd, 2016, in Romfilatelia’s shops in Bucharest, Bacau, Brasov, Cluj-Napoca, Iasi and Timisoara, the postage stamp issue presents prehistoric animals whose fossils were discovered in Tara Hategului and which are important elements in building a Museum of Transylvanian Dinosaurs, and also in the Dinosaurs Geopark Tara Hategului’s development.

A natural park and a UNESCO Global Geopark, the Dinosaurs Geopark Tara Hategului is an area of research, education and sustainable development, committed to preserving the geological, natural and cultural heritage and also to strengthening the identity of local communities. With the support of the geopark’s representatives and of those from the Dino Parc Rasnov, four prehistoric animals are illustrated on the issue’s stamps, as follows:

– Balaur Bondoc, reproduced on the stamp with the face value of lei 2.00, was a predator dinosaur, with its body covered in feathers and a length of 1.80 – 2 m.

– Theriosuchus sympiestodon, illustrated on the stamp with the face value of lei 3.00, was a primitive crocodile that lived in Hateg about 70 million years ago. Theriosuchus was a real “living fossil”, being part of a family whose members had already disappeared in other parts of Europe millions of years earlier.

– On the stamp with the face value of lei 3,30 is found the Magyarosaurus dacus, a herbivorous dinosaur weighing 800-900 kg and having a length of 7 m and a height of 3-4 m, one of the largest prehistoric animals from the Hateg area.

– Kogaionon ungureanui is illustrated on the stamp with the face value of lei 14.50. It was a small mammal, described and known only in Tara Hategului. From it, a complete skull was kept, which is extremely rare in mammals during the late Cretaceous.

The four stamps of the issue Prehistoric animals are completed by a set of four maxicards and a first day cover cancelled with the “first day” postmark clearly imprinted in green foiling. As page composition were used the sheet of 32 stamps, the minisheet of 5 stamps + 1 label and the block of 4 stamps (in philatelic album).

The special product of the issue is the philatelic album, created into a limited edition of 245 pcs. and equipped with block of 4 postage stamps of the issue and the first day cover of the issue, having the “first day” postmark clearly imprinted in green foiling. Both products are numbered from 001 to 245.

Romfilatelia thanks the Dinosaurs Geopark Tara Hategului – University of Bucharest (reproductions of Jakub Kowalski for the Transylvania Dinosaur Museum) and Dino Parc Rasnov for the documentary support offered in the creation of this postage stamp issue.