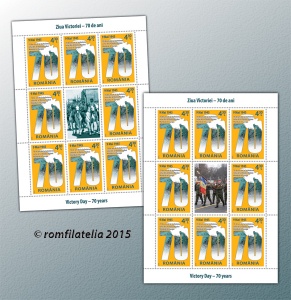 Romfilatelia dedicates the postage stamp issue Victory Day  70 years, to the 70-year celebration of the capitulation of Nazi Germany, a moment considered the end of the Second World War in Europe.

Two steps in the capitulation would take place. The first on May 8th, 1945, at Reims in France, in front of the American General Dwight D. Eisenhower. At the ceremony of signing the capitulation of Germany by Field Marshal Alfred. N. von Jodl, Admiral Hans G. von Friedeburg and Major General Wilhelm Oxenius were present, representing the Allied High Command, Lieutenant General Walter Beddel Smith and General Carl A. Spaatz, from the USA, Admiral Sir Harold Martin Burrough and Lieutenant General Sir Frederick Morgan, from the United Kingdom, Brigadier General François Sevez, from France, Lieutenant General Ivan Korniseev and Major General Ivan A. Susloparov of the USSR. This capitulation came into force on May 8th, 1945, at midnight.

The Soviet government said, however, that it will receive the German capitulation the next day, in Berlin. Thus, on the night of 8th to 9th, a second capitulation was organized by the Red Army in the occupied city of Berlin, this time in the presence of Soviet Marshal Georgy K. Zhukov. At 00:12 am, the act of unconditional capitulation of Germany was signed by Field Marshal Wilhelm Keitel, Admiral Hans G. von Friedeburg, General-Colonel Hans J. Stumpff, in the presence of representatives of the Allies: British Field Marshal Arthur W. Tedder, US General Carl A. Spaatz and French General Jean M. de Lattre of Tassigny. Thus, the German capitulation came legally into force on May 9th, 1945.

For this reason, the West celebrates the Victory Day on May 8th, and the former communist countries, on May 9th.

The capitulation found the Romanian troops on the battle field in Slovakia, along with Soviet troops. For the Romanian army, the Second World War had ended only on May 12th, 1945, with the annihilation of the last German resistance in the Tatra Mountains.

The stamp issue with face value of lei 4.30 depicts the anniversary number 70, symbolising the period since the defeat and the capitulation of Nazi Germany, along with a white dove transmitting the message of peace. Scenes of war can be seen on the background of the number 70.

In Romania, the celebration of the Victory Day on May 9th coincides with Europes Day, an annual celebration of peace and unity in Europe. For the Member States of the European Union, this day is also known as the Schuman Day, commemorating the statement of the French Foreign Minister Robert Schuman, who proposed the creation of the European Coal and
Steel Community, the cornerstone of the European project. Moreover, May 9th has a special historical significance for our country at the international level, Mihail Kogalniceanu proclaiming the independence of Romania on May 9th, 1877. The next day, on May 10th, the act acquired the force of law, being signed by Prince Carol I.

Romfilatelia thanks the King Ferdinand I, National Military Museum and Mr. Lucian Tudose for the photographic and documentary support granted in the achievement of this postage stamp issue. 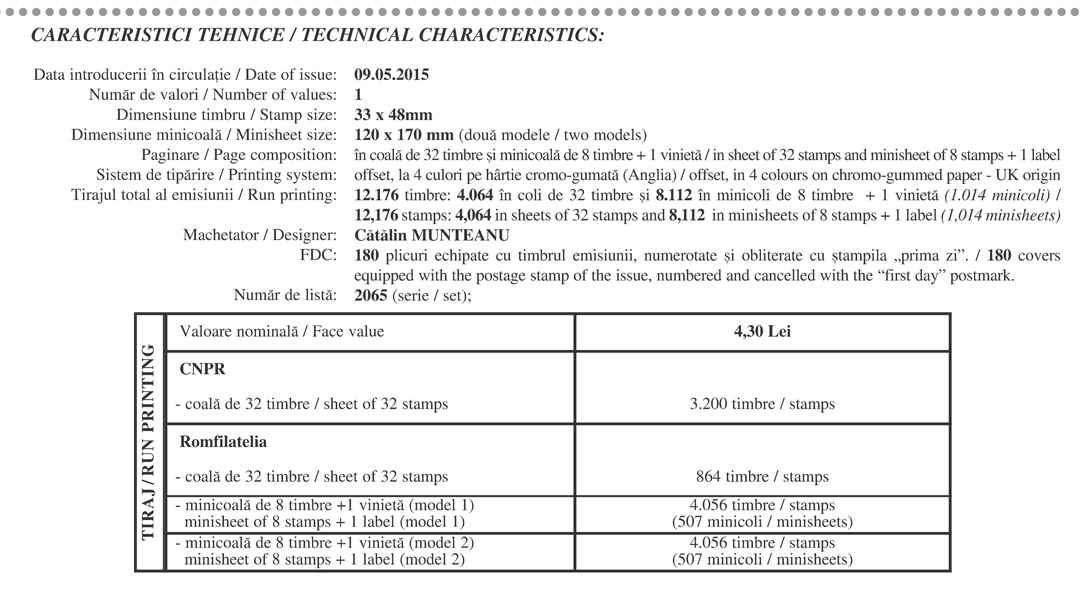