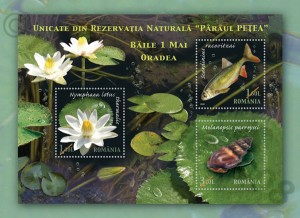 Rightfully appraising all the wonders that the Nature embellished our country with all meant to be cautiously preserved for the future generations, Romfilatelia, the specialized company in editing and trading Romanian postage stamps, introduces into circulation the postage stamps issue UNIQUE ITEMS IN THE NATURAL RESERVATION “PETEA CREEK” – BAILE 1 MAI – ORADEA.
In the North Western part of Romania, a few kilometers away from Oradea, in an ancient oaks forest, at the foot of the Somleu Hill, there is a tinny sub-tropical oasis, a magnificent place that the famous writer, Blaga, would have captured in the “world’s corolla of wonders”: Baile 1 Mai.
At an altitude of 140 meters, this is home of the Petea lake and creek, which, after crossing the
localities of Sanmartin and Oradea, flows into Crisul Repede river. The creek springs from the so called “Ochiul Tiganilor” (“Gypsies’ Eye”) and joins forces with various thermal springs. The greater of these has birth to the Petea Lake, also widespread acknowledged as the “Water Lily Lake” with a total surface of 4,100 square meters. The warm healing waters (constant temperature between 30 and 31 C) supplied by thermal sublacustrian springs, have, from early times, hosted ancient species: the thermal water lily Nymphaea lotus var. thermalis, accompanied, during the geological eras by the Melanopsis parreyssi thermal snail and the ray-finned fish (Scardinius racovitzai).
The presence of the above 3 endemic species of scientific importance bearing for the world genofond makes this particular lake an unique aquatic ecosystem. Numerous other species of amphibians, reptiles, birds and small mammals, protected within Europe, are present here.
All these have represented arguments for the set up of the Natural Reservation “Petea Creek”, which with its 10,8 hectares constitutes the sole thermal natural ecosystem in Romania.
During the first naturalist congress hosted in Cluj, Romania, in 1928, following the proposal forwarded by Emil Racovita, a decree was adopted regarding the elaboration of the law regarding the protection of the environment in Romania, decree that saw the light of day in 1930 through Law no. 213, based on which the first natural monuments gained their acknowledgement: the thermal water lily (following the intervention of the courageous botanist, professor Alexandru Borza), next to the lion’s foot while later on, in 1932, the Journal of the Council of Ministers decided the set up of the Natural Reservation “Petea Creek”.
Presently, the reservation is in the custody of the County of Tara Crisurilor.
The stamp with the face value of RON 1.40 represents the image of the thermal water lily Nymphaea lotus var. thermalis (commonly known as “drete”/“loosestrife”), a rare species of thermal lotus, being the sole case in which a tropical plant adjusts to a temperate climate country, to be admired on the face of the water from April until the end of October.
The plant was first discovered and described in 1798 by the botanist Paul Kitaibel.
Following researches made, the conclusion, the most agreed upon currently is the one according to which the plant is a tertiary relict which, during the glaciations period, adjusted and made its way in the warm waters and mud of the Petea Lake. This floral pearl survived grace to the microclimate created by the thermal water.
Under optimal conditions, the surface occupied by a single item of “drete”/“loosestrife” is of 8-10 square meters, the mature plant counting 60 big, round green leaves with denticulate margins, half of them
floating and the other half under the water. Flowers are big, they have between 15-25 white yellowish petals opening up in series and which open up at dawn and close at daylight sun rays. The sweet perfume, the same as the ancient one dating back in the tertiary era continues to solace nature such as it used to do in
the long gone time when the human touch did not interfere with nature’s way.
The stamp with the face value of RON 1.60 represents the image of Racovita’s ray-finned fish, Scardinius racovitzai, endemic fish species, strictly thermopile that prefers temperatures between 27 C and 34 C. It does not reach more than 12 cm length and it can be recognized based on its reddish fins.
The stamp with the face value of RON 3.10 represents the image of the water snail Melanopsis parreyssi. The subtropical climate and the physical chemical conditions offered by Petea Lake fostered the appearance of a rich gastropod fauna, out of which 30 species and subspecies of tertiary relicts. Melanopsis parreyssi is the unique survivor of this fauna and is to be found only at the Petea Lake. It lives in the unique springs, on plants or on the muddy bottom of the lake, at temperatures between 34 and 42 C. It reaches a height of 15-18 mm and 8,5 mm width, unlike its ancestors that reached much higher dimensions and were widespread found in the Panonic Sea during the Pliocene. The shell varies a lot in shape and dimension, otherwise a characteristic for relict extinction species. Its color is light grey and it can turn to dark brown when the animal is inside the shell.

The postage stamps issue was accomplished based on documentary materials set to our disposal and with the help of the “Iosif Vulcan” Philatelic Foundation, of the Museum in Tara Crisurilor and the Biology Department within the Faculty of Science, University of Oradea.