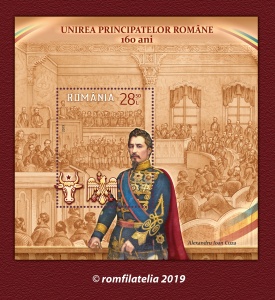 On the anniversary of Moldavia with Wallachia Union, in 1859, Romfilatelia introduces into circulation the postage stamp issue Union of the Romanian Principalities, 160 years.

The perforated souvenir sheet of the issue, with a face value of 28.50 lei, is illustrated with a lithography showing the opening of the works of the Legislative Assembly of the United Principalities (February 29th, 1860), in the presence of Alexandru Ioan Cuza, along with a portrait of the ruler and the coat of arms of Moldavia and Walachia.

Between the horns on the Moldavian coat of arms is a perforated star, which is a safety element of the postage stamp.

The Union of the Principalities was the first country project achieved by the Romanian patriots. The desideratum of the union was stated by the political and intellectual elites educated in the greatest Western European cities, at the beginning of the 19th century. The first concrete steps were taken during the Revolution of 1848, when a customs union between Moldavia and Wallachia took place during the reigns of Mihail Sturdza, respectively Gheorghe Bibescu.

The project of the Principalities unification was also favoured by the interests of the Great Powers in the Balkans. Taking advantage of the weakening of Russia’s influence, defeated in the Crimean War, Napoleon III wanted a pro-French bastion in the region and supported the national desideratum of the Romanians. In August 1858, at an international conference in Paris, a Convention was signed allowing the reorganization of Moldavia and Wallachia, which were dealt unitarily in international relations, provided two Rulers, two Assemblies and two Governments were elected in each Principality. However, there were also two joint institutions, headquartered in Focsani, namely the Central Commission and the High Court of Cassation and Justice.

In the next months, the two Principalities have begun to implement the provisions of the Paris Convention. The most important step was the designation of the Rulers. The first elections took place in Moldavia on January 5th, 1859, being elected Alexandru Ioan Cuza, a moderate liberal, who managed to attract on his side even deputies from the conservative party. If the consensus was reached quickly in Iasi, the misunderstandings between liberals and conservatives in Wallachia were profound. Because the Paris Convention did not expressly state that the Ruler of Moldavia could not also be elected in Wallachia, the Wallachian patriots have launched the idea of electing Cuza.

The decision was to be adopted on January 24th, 1859, and the liberals mobilized the population in Concordia Hotel area in Bucharest where the debates were held, to put pressure on the conservatives to also elect Alexandru Ioan Cuza. The Great Powers were forced to face the facts, and in the following years Cuza was recognized as Ruler, inclusively by the Ottoman Empire.

Alexandru Ioan Cuza is one of the most appreciated leaders in the Romanian history. He is also a personality illustrated in philatelic issues, starting with the “Cuza” issue in 1864, with the face values of 2, 5 and 20 pennies (penny, or “para” in Romanian), which had the effigy of the Ruler in the circle.

The “first day” cover renders Alexandru Ioan Cuza’s Proclamation to the Elective Assembly of Wallachia (February 10th, 1859), in which the ruler refers to the significance of the Union. The document is validated with the seal of the United Principalities and the holograph signature of the ruler.

The “first day” postmark reproduces the elements of the (1862) “United Principalities” postage stamp issue, namely the coat of arms of Moldavia and Muntenia and the post horn.

Romfilatelia thanks to the management of the National Archives of Romania and the Bucharest Municipality Museum for the documentary support granted for the achievement of this postage stamp issue. 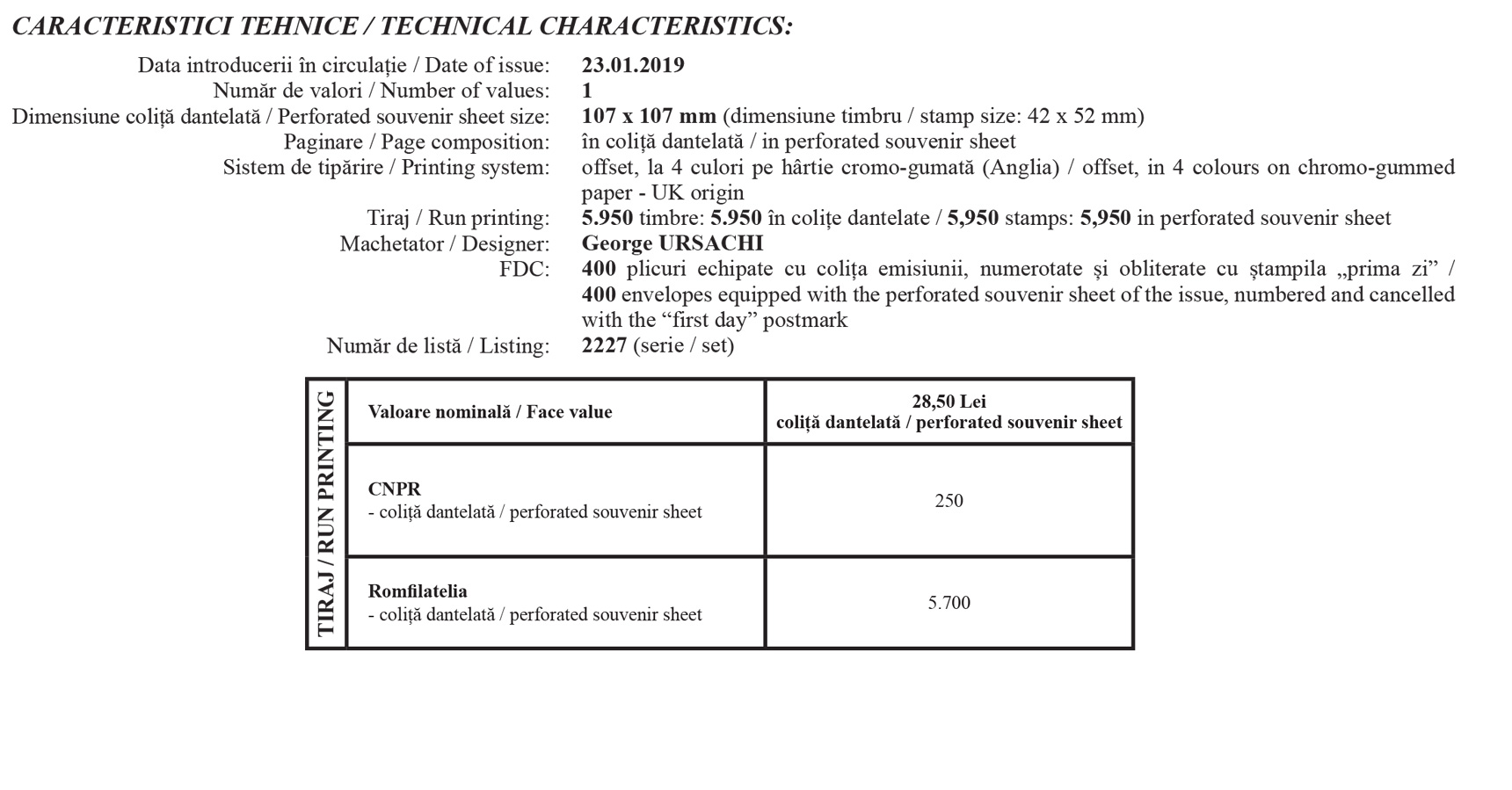