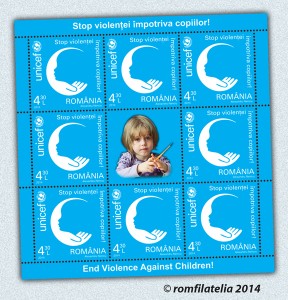 „Childhood is the mystery of the future disclosure.”

By joining the campaign conducted by the UNICEF Representation in Romania, “END VIOLENCE AGAINST CHILDREN”, Romfilatelia assumes the honourable mission of supporting this project, by issuing a postage stamps issue dedicated to this initiative.

The Representation of UNICEF inRomania has been developing a three years communication campaign, meant to make the families aware of the risks of violence against children, especially of verbal abuse that is used as a disciplinary method, but also aiming to emphasize the benefits of positive methods of discipline.

The appearance of domestic violence is determined by many factors, the most frequently being alcohol consumption, poverty and an environment marked by various forms of violence.

The number of reported domestic violence is on the rise, according to the latest statistics, but in some cases specialists don’t have the means and tools they need to help children.

As a consequence of various types of violence, thousands of children are separated from their families and placed in institutions or with foster parents.

The awareness campaign at national level will be supported by an intervention applied locally, namely in 32 rural communities. The social and community medical assistants in these villages will be instructed to identify and to respond to the various forms of violence against children.

At the same time, they will have at their disposal materials and tools meant to help them communicate with the families and the community, the goal being the reduction of the high level of tolerance on violence.

Professionals will be able to mobilise the community and the opinion leaders, in order to raise awareness of the violence against children, and will help families adopt positive methods in disciplining children.

The vision of this campaign is materialised by a world where every child needs to be shown respect for his right to life, protection, his dreams and ideas being taken into account as well.

It is up to us to build the society that we wish to live in, where all the children are protected.

Just because we cannot always see the violence that children face, it does not mean it is absent.

Changing social norms by getting the society to condemn every form of violence, exploitation and abuse requires time and resources. Nevertheless, it is a crucial step to the improvement of children’s lives in a sustained manner.

On the postage stamp with the face value of lei 4.30 it is symbolically depicted a child’s profile, together with the protecting hand that supports him.

We would like to thank the Representation of UNICEF in Romania for the support granted in the accomplishment of this postage stamps issue. Photography made by Mr. Radu Sandovici for UNICEF. 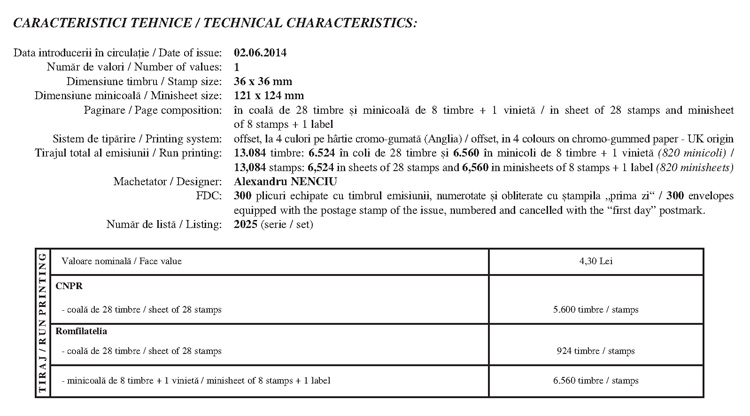