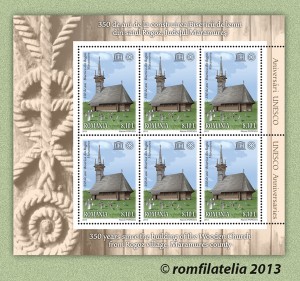 Loyal to its mission of promoting unique historical monuments from our country, Romfilatelia celebrates the anniversary of three and a half centuries since beginning the construction of the Wooden Church from Rogoz by introducing into circulation a postage stamps issue dedicated to this event.

Wooden churches have been unanimously recognized for the simplicity and balance of their volumes and proportions, being considered highly valuable artistic and technical achievements.

The Saints Archangels Michael and Gabriel Church from Rogoz, built in 1663, two years after the invasion of Tatars in 1661, lies on the Valley of Lapus River, in the village bearing the same name, and represents a clear example of the talent of the artists who used traditional techniques to turn the secular wood into a genuine masterpiece.

The village was first mentioned under the name “Rogos” in 1488 and it was part of the property of Ciceu fortress, which belonged to Stephen the Great and subsequently to the other Moldavian rulers.

Tradition says that it was erected from two pieces of wood and the short stone foundation sustains walls from massive elm beams.

Like a true miracle, the church survived the fire put by Tatars in 1717 when other tens of churches and villages were turned into ashes.

The originality of this church is given by the polygonal antenave, the rectangular nave and the seven-sided polygonal apse.

The exterior of the church is decorated with pre-Christian motifs, where the rope and rosette motifs are predominant. The roof is asymmetric, high, pyramidal and the bell tower is square-shaped. The bell room is open, with columns and arcades.

On the west part of the entry, a carved cross lies on the entire height of the church wall.

The interior painting made in 1785 by the icon painters Radu Munteanu and Nicolae Man attests through inscriptions, in the nave and the altar, that the church was built by Grigore Man and his wife. This may now be seen only in the nave and antenave. The themes of the painting are from the Old and New Testament.

The painting is attested by the Cyrillic inscriptions from the altar: “In 1785, this holly church was painted during the reign of the holy emperor Joseph II …”

On the dome there are represented scenes from the Genesis (Adam’s creation, Eve’s creation, Adam and Eve cheated by the snake, the Expulsion fromParadise).

Among the numerous old icons of the church, the icon of Virgin Mary and Child Jesus stands out, having their faces and aureoles painted in relief and bearning the inscription 1787.

In 1834, an anonymous icon painter repainted the ceiling of the antenave and the dome of the nave, managing to integrate the general image of the interior painting into a harmonious creation.

The restorations carried out between 1960 and 1961 reinforced the church by rebuilding the foundation and changing the floor and the roof.

The monumentality of this church is given by its simplicity, the silhouette and ornamental language and by the design and technical construction, demonstrating once again the geniality of the Romanian craftsmen.

The stamp of the issue with the face value of lei 8.10 illustrates the Wooden Church from Rogoz by giving value to the ecclesiastical beauty, the national culture and the traditions of the picturesque locations. 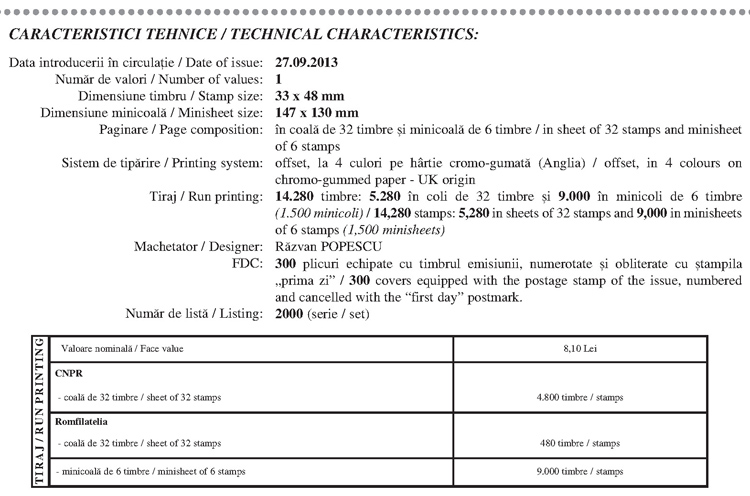