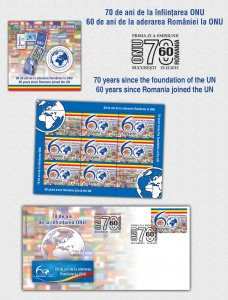 The year 2015 marks two events with major significance both abroad and within our country, namely a double anniversary connected to one of the most important international bodies, the United Nations, whose fundamental role is to maintain peace and prevent new global conflicts.

Thus, in 2015, the United Nations celebrates 70 years since its foundation, through the coming into force of the UN Charter, on October 24th, 1945, and 60 years since Romania joined the organization (through a resolution of the UN General Assembly on December 14th, 1955), a moment which was significant as a means of affirmation on the international scene, given that until then Romania had been in the shadows of the Iron Curtain.

Romfilatelia and the postage stamp add to the national philatelic heritage the two anniversary moments, by introducing into circulation the postage stamp issue suggestively entitled 70 years since the foundation of the UN, 60 years since Romania joined the UN, a project which will be available for purchase starting from Tuesday, December 15th, 2015, in Romfilatelia’s shops in Bucharest, Bacau, Brasov, Cluj-Napoca, Iasi and Timisoara.

The issue consists of a postage stamp and a perforated souvenir sheet. The graphics of the stamp, with the face value of lei 4.50, honours the 60 years since our country joined the UN. In this respect, the symbolic number “60” stands out, being represented on the stamp in large sizes, and in the background can be seen a tricolor band that highlights the national significance of this event. Also, in the background are presented, in a faded manner, the flags of the UN member states.

The perforated souvenir sheet of the issue, with the face value of lei 8,10, is dedicated to the anniversary of 70 years since the foundation of the UN, metaphorically depicting the number “70”, through a collage of stamps made by Romania over time and illustrating anniversary moments of the UN – 20, 25, 40, 50 and 60 years of its establishment. The figure “0”, found in both anniversaries, appears as the Earth globe, which refers symbolically to the value and importance the UN has worldwide. The background of the souvenir sheet refers, alike the stamp, to the flags of the UN member states.

The postage stamp and the souvenir sheet of the anniversary issue are completed by a first day cover, while as page composition were used the sheet of 32 stamps and the minisheet of 7 stamps + 2 labels.

Romfilatelia thanks the Ministry of Foreign Affairs for the support granted in the accomplishment of this postage stamp issue.