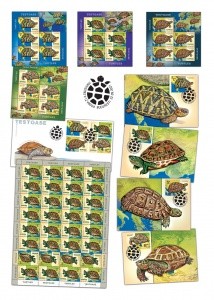 Turtles are reptiles with their bodies covered by a hard shell, made up of bone plates that concretize with the spine and ribs. The shell is called the test and consists of two parts: a dorsal part, called the carapace, and a ventral part, called the plastron. The two parts are joined laterally, with openings through which the limbs, head and tail of the animal come out. The bone plates of the test are covered on the outside either by horny plates made of keratin (the substance from which the nails, hair, mammalian hooves are formed), or by a thick skin, in some species. The largest species of turtles reach a length of 2 meters, and the smallest are only 8-13 cm long at maturity. About 350 species are known, which live on land or in fresh or marine waters.

Turtles are ectothermic animals (their body temperature depends on the environment). One of the mechanisms by which turtles adapt to very high or low temperatures is entering a dormant state, called estivation (in summer) and hibernation (in winter).

They breed by eggs laid on land (even the aquatic turtles).

Many species of turtles are endangered, because of multiple causes: illegal trade in animals, water pollution, fishing (aquatic turtles breathe through the lungs and, if accidentally caught in fishing nets, they drown), collection of eggs for consumption purposes.

On the stamp with the face value of Lei 1.70 is represented the Indian star tortoise (Geochelone elegans), which lives in arid areas of India, Pakistan and Sri Lanka. It is a vulnerable species, rarer, because many specimens are caught to be sold in the illicit trade in exotic animals, this turtle being sought as a pet, due to the attractive appearance of the carapace.

On the stamp with the face value of Lei 2 is depicted the Chinese stripe-necked turtle (Mauremys sinensis), found in China, Laos, Taiwan and Vietnam. It lives at low altitudes, in lakes, ponds, canals and rivers with slow flowing waters, feeding mainly on aquatic vegetation. It is an endangered species, being sold as a pet or for use in traditional medicine (although trade in specimens caught in the wild is prohibited), as well as due to the introduction of invasive alien species.

The species is vulnerable, affected by illegal collection and habitat degradation (due to grazing and expansion of agricultural and industrial areas). In Romania, the Greek tortoise is endangered.

On the stamp with the face value of Lei 19.50 is represented the Russian tortoise or Horsfield’s tortoise (Testudo horsfieldii). Native to the arid areas of Central Asia, it is a vulnerable species, its natural habitat being affected by the expansion of human activities. It is a small turtle; at maturity, it reaches a length of 13-25 cm, females being slightly larger than males.

Two specimens of this species were part of the first group of terrestrial creatures that travelled to the Moon. In 1968, along with bacteria, plants, insect larvae and other life forms, they took part in the Soviet space mission Zond 5, designed to test the effect of cosmic radiation on living things. The spacecraft flew over the Moon and returned to Earth with all “occupants” alive.

The First Day Cover of the issue illustrates the yellow-spotted Amazon River turtle (Podocnemis unifilis), a freshwater turtle, native to South America, where it lives mainly in the basins of the Amazon and Orinoco rivers. It is one of the largest South American water turtles; can reach 45 cm in length and 8 kg in weight. It lives in rivers and lakes, feeding on aquatic plants, fruits and aquatic animals (fish and small invertebrates).

Romfilatelia brings many thanks to “Grigore Antipa” National Museum of Natural History for the documentary support provided to the development of this postage stamps issue.

The postage stamps issue “Turtles” will be available on Wednesday, September 22nd, 2021, in Romfilatelia’s shops network in Bucharest, Bacau, Brasov, Cluj-Napoca, Iasi and Timisoara and online on https://romfilatelia.ro/store/. 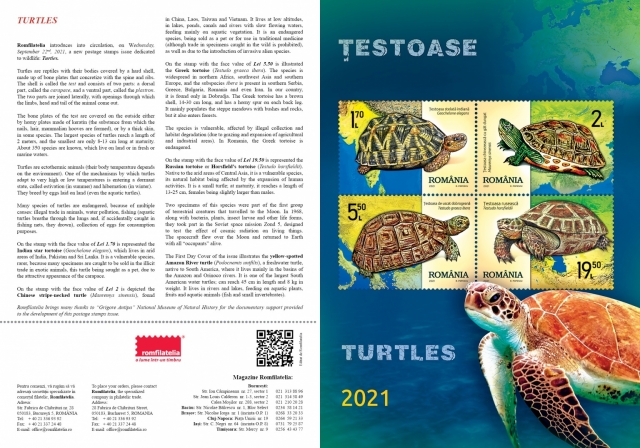 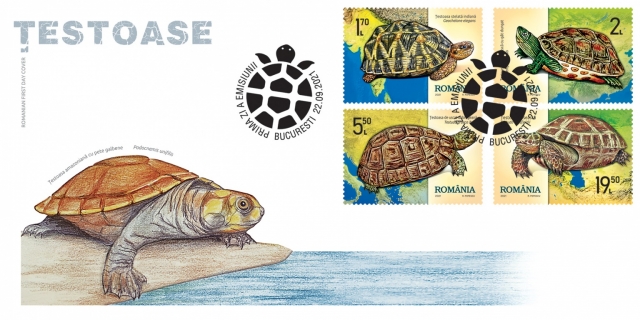 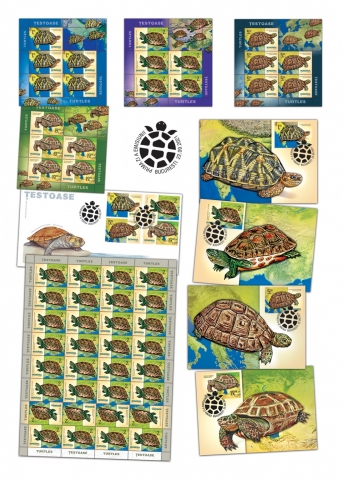 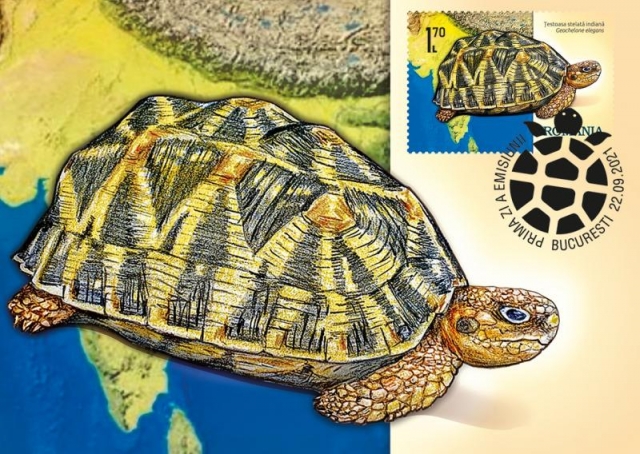 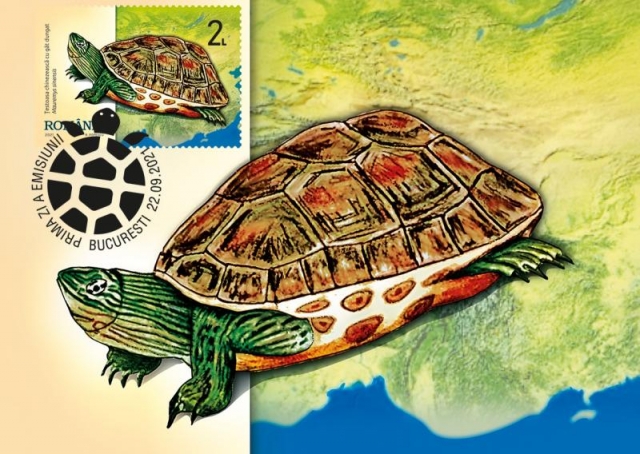 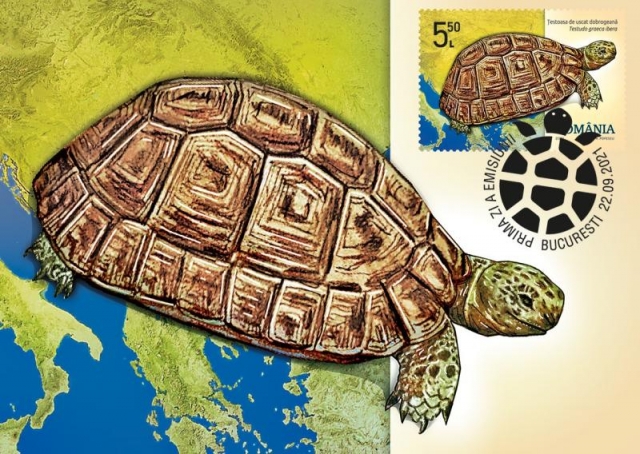 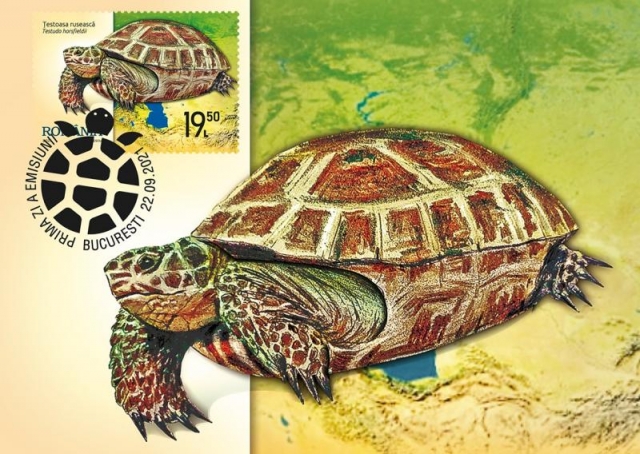 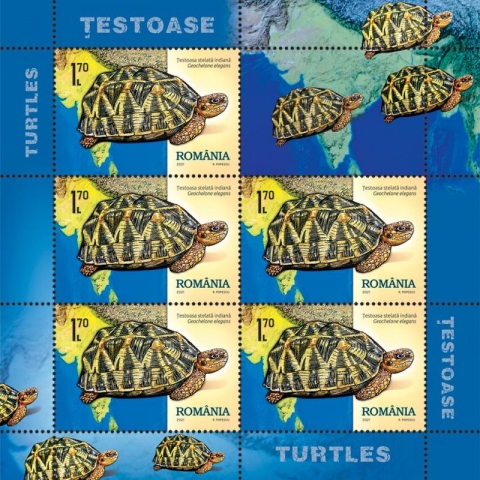 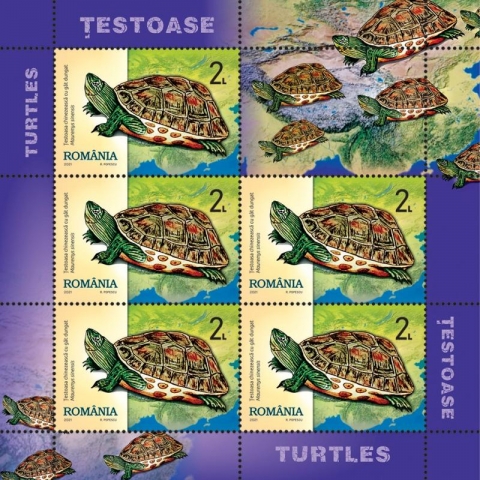 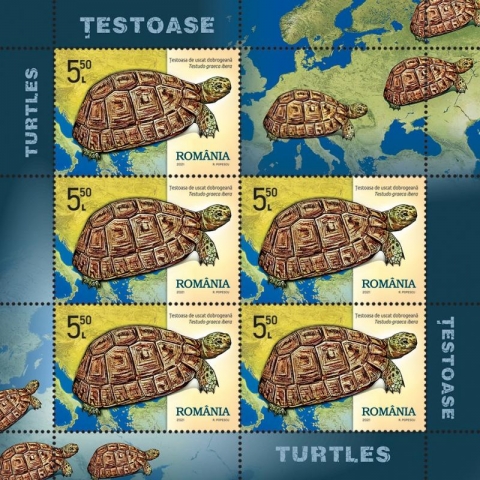 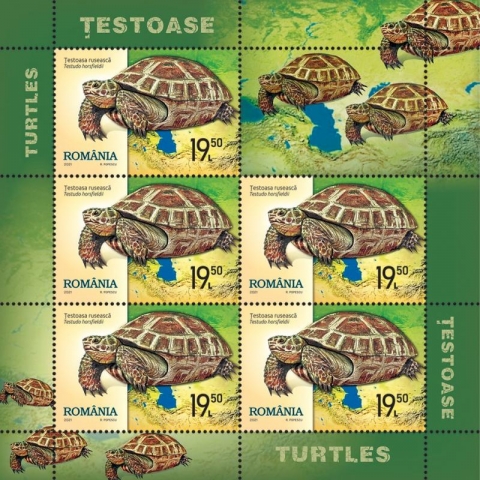 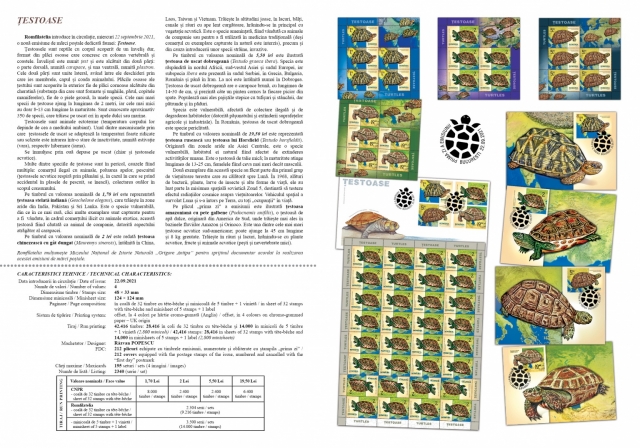 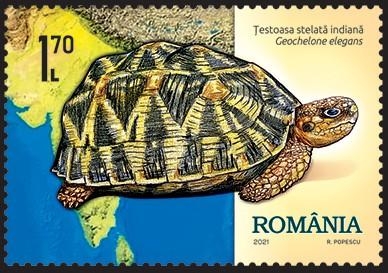 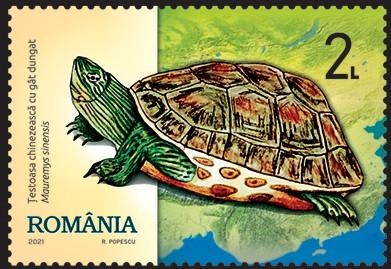 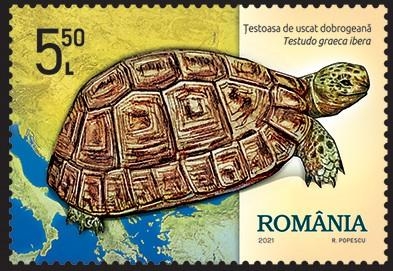 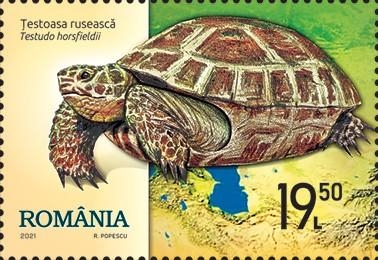