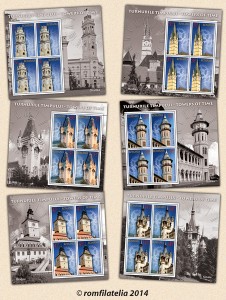 Ever since Antiquity, the measuring of time has been a preoccupation for people, who first started measuring it by the apparent movement of the sun and stars, later on inventing the first mechanisms for a more precise measuring of the passing of time – the hour glasses with sand and the hydraulic devices.

The first known mechanical clock was built in China, in 725 c.e. In 13th century England, appear the first mechanical clock-bearing towers, the oldest surviving tower clock, that of the Salisbury Cathedral, dating from 1386. The oldest tower clock on Romania’s territory is the one from Cisnadie, a township next to Sibiu, which started its tracking of time around 1425.

In recognition of the historical and architectural value of clocks and clock towers, Romfilatelia dedicates the postage stamp issue of 6 stamps Towers of Time, Clock Towers to some of the most representative assemblies of this type built over time in Romania.

The Tower of Oradea City Hall, illustrated on the stamp with the face value of lei 3.00, was built between 1902-1903, being 50 m tall, structured on 4 levels. At the first level we can find the tower clock mechanism. The clock from the third level plays at specific times „Iancu’s March”. The clock was built in 1904, having 4 dials, one on each side of the tower. It survived the two World Wars, the clock dials still bearing the marks of bullets from 1944, when the battles for the liberation of Transylvania took place.

On the stamp with the face value of lei 3.10 is illustrated The Trumpeters’ Tower of Medias. The tower was raised in two stages: first, the lower floors, built at the same time as St. Margaret Church, and after, the topmost floors, finalised in 1551. It is 68 m tall and at its top is tilted from the central axis of the tower by 2.28 m. The tilting has occurred because of the extra weight added to the tower later on, as the tower was further heightened with its top floors. The Trumpeters’ Tower is in fact among the world’s top 10 most tilted buildings.

In over 500 years since its building, the tower was damaged numerous times due to lighting and storms, which have destroyed its roof and sometimes the interior as well. From the very beginning, the tower had clock dials, one on each of its 4 sides, while in 1880 the current clock was installed, indicating the phases of the moon.

The stamp with the face value of lei 3.30 depicts the Tower of the Palace of Culture from Iasi. The raising of the palace was interrupted during Wold War I, lasting from 1906 to 1925. The Palace of Justice in Paris was the inspiration source for architect Ion D. Berindei in choosing the flamboyant Neo-Gothic architectural style of the building. The tower of the palace bares 3-dial clock with a diametre of 3.25 m, decorated with stained glass depicting the 12 astrological signs. The 8 bells of the tower ring every hour with the tune of Dance of Unity (“Hora Unirii”). On the night of the inauguration of the Palace of Culture tower clock, architect Berindei, together with his two sons, set the clock to ring continuously, for several hours, with the tune of the Dance of Unity (“Hora Unirii”), which could be heard throughout the town.

The Tower of the Communal Palace of Buzau is illustrated on the stamp with the face value of lei 3.60. The building, which also incorporates the tower, was raised between 1899-1903 after the project of architect Alexandru Savulescu, and was inaugurated in the presence of King Carol I, in 1904. The architectural style is a harmonious mix of Gothic, Byzantine, Baroque and Brancovenesc style elements. The capitals of the columns at the street level are Corinthian, while the columns themselves are Ionian by their massiveness. The columns of the upper floor are reminiscent of the great Venetian palaces. The tower is 20 m tall, the clock being installed in 1903.

The Tower of the Brasov City Council is illustrated on the stamp with the face value of lei 4.70. Initially, the Council House from Brasov had been a mere surveillance tower; however, in 1420, the Furriers’ Guild allowed the 9 communes making up Burzenland to build the Council building, to house the meetings of the city council. Over time, new rooms were added to the building, as well as the tower equiped with clock dials on all of its four sides. Starting with 1690, the mechanism of the clock strikes the bell of the tower every hour. The architecture of the City Council building combines the Gothic, Baroque and Renaissance styles.

The Peles Castle, built between 1875-1883, was the official summer residence of the Royal House of Romania. Considered as being among the most beautiful castles in Europe, this was the first castle to have electric lighting on the continent. In 1906, the central tower of the castle is erected, with a height of 66 m, the clock mechanism being added one year later and being produced by the “Johann Mannhardt” tower clock workshop of the Bavarian Royal Court. The Central Tower of the Peles Castle is illustrated on the stamp with the face value of lei 14.50. The mechanical main clock of the tower has 3 dials, being decorated with the main astronomical symbols and oriented towards South, East and West.

Romfilatelia thanks Mr. Cornel Constantin Ilie, historian, George Avanu, Calin Leucuta and Silviu Matei, photographers, for the documentary and photographic support granted in the accomplishment of this postage stamp issue. 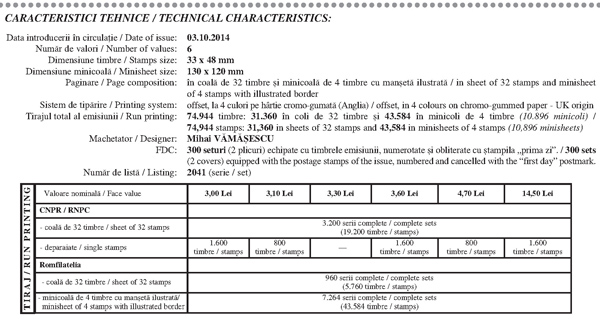