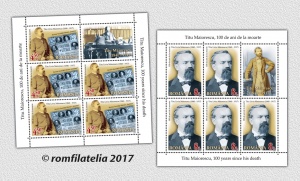 “Who has a vocation? He who forgets himself
in the moment of work.
”

This year marks the 100th anniversary of Titu Maiorescu’s passing, an emblematic personality of the Romanian cultural and political life at the end of the 19th century and the beginning of the 20th century.

Romfilatelia commemorates the Titu Maiorescu, 100 years since his death, on June 19, through the postage stamp issue bearing his name.

Member of the Romanian Academy and one of the remarkable figures of the time, leader of the Literary Society “Junimea” and of the journal “Literary Conversations”, he developed an impressive teaching career at the “Vasile Lupu” Normal School and “Al. I. Cuza” University, where he was also the rector.

The activity for which Titu Maiorescu remains acknowledged is founding the “Junimea” cultural society with Petre P. Carp, Vasile Pogor, Theodor Rosetti and Iacob Negruzzi, in 1863. They would be joined by personalities such as Alecsandri, Eminescu, Creanga, Caragiale, Slavici, but also representatives of other fields than that of literature, such as memorialist Gh. Panu, linguist Al. Philippide, philosopher Vasile Conta, historian of A.D. Xenopol, according to the ministry, “anyone may join, anyone who can, may stay”. What united Junimea’s members was to direct Romanian culture to a new stage, to eliminate mediocrity and to promote writers of definitive value. The role of Junimea imposed new directions in Romanian literature as early as the second half of the 19th century.

Titu Maiorescu would become a literary guide and critic through his studies and articles, and his work “Critical research on Romanian poetry from 1867” is considered a reference work for Romanian aesthetics.

His impressive personality influenced the most important fields of Romania’s cultural, social and political life, Titu Maiorescu being the author of the famous sociological theories of “the ungrounded forms” and the “foundation stone” on which were built the works of Mihai Eminescu, Ion Luca Caragiale or Ioan Slavici. Due to the recognition of his intellectual qualities, Maiorescu has an impressive trajectory: at 22 years old a university professor, a dean at 23 and a rector at the same age, an academician (member of the Romanian Academic Society) at 27, deputy at 30, and a 34-year-old minister.

The ideas for the process of perfecting the Romanian literary language, formulated by Maiorescu, were accepted by the Romanian Academy between 1880 and 1881, which appropriated these principles, greatly contributing to the unification of the modern Romanian language.

In the middle of the 19th century, with the Union of the Principalities, Romania was in the midst of political change, which led to the conquest and recognition of independence opening the way for the modernization of the state.

A convinced supporter of the unity of the young Romanian state, Titu Maiorescu, pursued an intensive political activity as a journalist in the pages of the “National Voice” newspaper in 1866.

Being of conservative orientation, Titu Maiorescu served as prime minister and then foreign minister (1912-1914), when the Bucharest Peace Treaty was signed. Although he did not manage to pass through Parliament any of his bills on education, among his achievements as a minister we mention: the development of education in the villages through the establishment of new schools, the initiation of surveys and statistics on education, the building of school buildings, selection of the best Romanian language study books for the high school, projects for setting up the Polytechnic School, botanical gardens, a department of Romanian language, preservation of the national patrimony, support for the Romanian schools in Transylvania.

The stamp with the face value of Lei 4.50 illustrates, alongside the portrait of the great literary critic, o page of the magazine “Convorbiri Literare” (Literary conversations), a flagship publication of the Junimea Literary Society.

The stamp with the face value of Lei 8 portrays the great man of culture and politician that was Titu Maiorescu.

Through his entire activity, which covered virtually all areas of cultural, social and political life, Titu Maiorescu had remarkable contributions to the development of Romanian society in the context of the values of Western civilization.