Located in a strategic place from where one could control the largest part of Banat Plain,Timisoarathrived especially during the reign of Charles Robert of Anjou(1308-1342).

Between 1316 and 1323, in the context of political turmoil from the Hungarian Kingdom, Charles Robert ofAnjoumoved the capital city toTimisoara, on which occasion they decided the construction of the royal palace.

For a period of 50 years (1440-1490), Timisoara fortress would be in the possession of Corvinesti family, and John Hunyadi (Iancu de Hunedoara) would use the position of the city to install a permanent military camp.

Between 1552 and 1716, Timisoara was under Ottoman oppression having the same special status as Belgrade and Buda had.

In 1716, Eugene of Savoy conquered Timisoara fortress adding it to the Habsburg Empire.

As it was normal, once with the Great Union of 1918, Timisoara would belong to Romania.

Timisoara is, by far, the city that registered the most European premières in various domains.

In 1889, the city hosted the first European football match in Romania and in 1895 there was paved with asphalt the first street on the current Romanian territory.

In 1953, Timisoara was the only European city having three state theatres in Romanian, Magyar and German languages.

The documentary attestation date of Timisoara city is quite controversial from historians’ point of view, but that one most of them agreed upon is the year 1212.

Starting from this date by majority accepted, Romfilatelia introduces into circulation the postage stamps issue entitled “Timisoara – 800 years of documentary testimony”, consisting of four stamps and one souvenir sheet.

On the postage stamp with the face value of 2.10 lei is illustrated The Episcopal Roman-Catholic Cathedral.

The edifice, also known under the name of the Roman-Catholic Dome, was built between 1736 and 1774, according to the blueprints of the Viennese architect Emanuel Fischer von Erlach.

The interior stands out by nine altars decorated in Baroque and Rococo styles sculptured by the Viennese Johan Müller.

The organ is a copy after the famous organ from Saint Sulpice Churchin Paris.

The architectural style of the Cathedral is Baroque and it is considered to be the most unitary and representative Baroque construction in Timisoara and one of the most valuable edifices in Banat. It also belongs to the rare monuments in which the original furniture of the edifice has been preserved almost integrally until nowadays.

On the postage stamp with the face value of 5.00 lei is illustrated Timisoara Fortress in 1602, a reproduction after a chromolithography made by Fork E. in 1876 at Timisoara.

On the postage stamp with the face value of 7.60 lei is illustrated Hunyadi Castle, a reproduction after a lithography from the 18th century.

The oldest building of Timisoara, Hunyadi Castle, was built between 1443-1447 by John Hunyadi (Iancu de Hunedoara) on the ruins of an old castle from the 14th century erected by Charles Robert of Anjou.

In 1849, the castle was totally destroyed by the Magyar revolutionists laying siege to Timisoara. Its reconstruction and renovation would last until 1856.

In 1947,Hunyadi Castle became the Museum of Banatin whose rooms one may see objects and documents from the field of archeology, history and natural sciences.

On the postage stamp with the face value of 14.50 lei is illustrated The Orthodox Metropolitan Cathedral, the biggest religious construction of Timisoara considered the symbol of the city.

The architecture of the Timisoara cathedral is a combination of the Romanian religious style and the Byzantine-Moldavian one. Due to its dimensions, it may host up to 5,000 believers.

Finished in 1940, the final touches, the interior and exterior paintings (author Atanasie Damian) of the Cathedral would be finished only as late as 1956, due to World War II.

On October 6th 1946, the Cathedral was dedicated in the presence of King Michael I of Romania (Mihai I al Romaniei), the entire episcopate of Ardeal Metropolitan Seat and representatives from all over the country.

In 1956, they brought the relics of Saint Josef the New of Partos (Sfântul Iosif cel Nou de la Partoş), a former Metropolitan bishop of Banat in the 17th century, and the painting of the Cathedral was restored between 2003 and 2006.

On the souvenir sheet of the postage stamps issue is illustrated the image of a reconstruction of Timisoara Fortress in 1800, and the current coat of arms of Timisoara municipality.

We kindly thank the City Hall of Timisoara Municipality, the Romanian National Archives and Mr. Ovidiu Cristea, the manager of “Nicolae Iorga” History Institute of the Romanian Academy for the support granted in the accomplishment of this postage stamps issue. 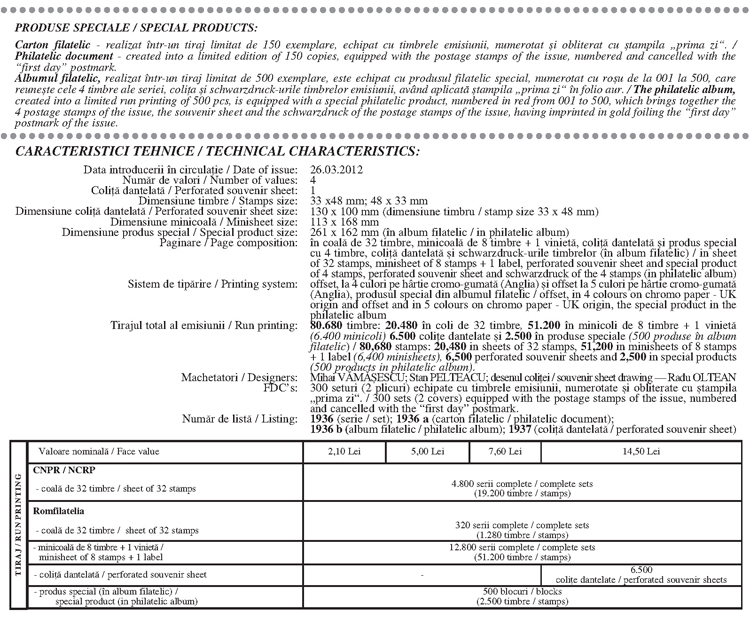