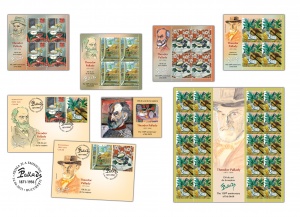 Pallady is delicate in fragile shades and splendours,

our master tells us the secrets of the colours

seen from the inside, wrapped in silk.

Romfilatelia introduces into circulation, on Wednesday, the 14th of April, 2021, a new postage stamps issue dedicated to fine arts and to one of the masters of the Romanian modern painting: Theodor Pallady, the 150th anniversary of his birth.

Theodor Pallady was born in Iasi in 1871. After the first years of schooling, he lived in Bucharest (1886) as a pupil of the School of Bridges and Roads, and later in Dresden, as a student of the Polytechnic in this city. In parallel with his engineering studies, he took painting lessons with Ervin Oehme. He dedicated himself to painting and, in 1889, went to Paris to study in Edmond Aman-Jean’s studio. Later, starting in 1891, as a student at the School of Fine Arts in Paris, he studied in the studio of Puvis de Chavannes, husband of Princess Cantacuzino, the sister of the painter’s maternal grandfather. He had the opportunity to meet Matisse directly, with whom he would form a long friendship. Between 1892 and 1897, he completed his studies with Gustave Moreau, Aimé Morot and Fernand Cormon.

His artistic debut is recorded in 1900, at the Paris Salon and at the Universal Exhibition. In 1902, he exhibited in London, and two years later, at the Romanian Athenaeum.

Theodor Pallady is the painter of the intimacy of his environment, with an evocative, poetic conception, full of tenderness and sensitivity. The painting, calm and austere, renders great colour intensity. Starting from a painting that explicitly presented the subjects, he arrives at a painting of refinement, close to Matisse’s art, in which the colours are clear, bright and in rigorously constructed rhythms. A rational spirit of the measure, avoiding exaggerations, is noticed. In his painting, and especially in his drawings, there is sometimes an ironic touch.

Theodor Pallady’s thematic repertoire is diverse, often featuring nudes, landscapes, flowers, indoor still lifes and many self-portraits. Rhythm and harmony define the essential elements of his paintings. He is considered a painter of silence and tranquillity. His paintings can be compared to those of Marquet and Bonnard. Through his entire artistic creation, Theodor Pallady inscribed in the Romanian painting an innovative and original page, offering new perspectives on the line of painting intellectualization.

On the four stamps are reproduced paintings by Theodor Pallady that are part of the painting collection of the Pinacotheque Gallery in Bucharest, all attesting to the artist’s interest in the genre of still life, richly represented in his work. The whole creation of Theodor Pallady in this genre is based on classical, thematically restricted, structurally-logical compositions, with balanced proportions, bright chromatic and spontaneous touch. Still lifes reproduce the surrounding reality, and go beyond it, whether it is a mask, plant, guitar, bread, or a fruit cut into slices, all in the genre props of the artist, who knew how to build an intimate environment.

The first stamp, with the face value of Lei 2.20, reproduces the painting Still Life with a Mask. Formed mainly in the studios of French painters (especially in Gustave Moreau’s studio) whose technique and repertoire took on oriental elements, Theodor Pallady nevertheless developed his own conception of the Orient, which he viewed in terms of a temperate modernism and which he captured, after 1920, in various themes. Thus, we find in its static natures different items probably seen in museums in the Far East (statuettes or masks – as we can see in this work) or fruits from the East (lemons, pomegranates), the compositions containing several decorative backgrounds of Matissian inspiration.

On the second stamp, with the face value of Lei 5.50, is illustrated the painting Street Landscape (Paris). The work makes the transition between the still lifes and the landscapes of Theodor Pallady, linking them intelligently and sensitively. The captured image of the flower placed on the sill of the window wide open to the street, the chromatic subtlety with a warm dominance, vibrated by the free touches, betray a post-impressionist influence. The contrast of quantity made the flowerpot in the Street landscape be bathed in the sandy tones of the background supported by the neutral greys in the distant plane. The synthesis of forms helped the artist to keep his credo: “Everything that does not go beyond reality is not art”.

On the third stamp, with the face value of Lei 9, is represented the work Static Nature. Theodor Pallady’s preferences for indoor compositions were to lead to the appearance of exceptional series of still lifes, which will always resonate with the artist’s spirit. With an ever-changing prop, consisting of objects inside his studios, such as flower pots, paintings, books, boxes, glasses, pipes, statuettes or sliced fruits (as in this case), arranged in a balance carefully established by the perfectionist artist, Pallady would seek in his compositions the discovery of a new, perfectly balanced world. The work was part of Dr. A.I. Siligeanu’s collection and was acquired in 1978.

On the fourth stamp, with the face value of Lei 10.50, is depicted the work Still Life. Everyday objects capture the expressiveness of materiality, a social context of the past and present that speaks about the artist’s concerns. A mirror reflects the image of the pot and the guitar, giving three-dimensionality to the work. The ochre and vivid green of the plant are like two musical notes that compose a symphony of colours. The work comes from the great collector Luca Lasserson.

Self-portraits of Theodor Pallady are reproduced on the borders of the minisheets; two of them belong to the Library of the Romanian Academy, and the other two – to “Ion Ionescu-Quintus” Prahova County Art Museum.

On the two First Day Covers of the issue also are illustrated two self-portraits of the painter, belonging to the collection of the Library of the Romanian Academy.

Romfilatelia thanks the Library of the Romanian Academy in Bucharest, the Museum of the City of Bucharest, “Ion Ionescu-Quintus” Prahova County Art Museum and the Brukenthal National Museum for the documentary and photographic support provided to the development of this postage stamp issue.

The postage stamps issue “Theodor Pallady, the 150th anniversary of his birth ” will be available on Wednesday, April 14th 2021, in Romfilatelia’s shops network in Bucharest, Bacau, Brasov, Cluj-Napoca, Iasi and Timisoara and online on https://romfilatelia.ro/store/.

The postage stamps issue is completed by two “first day” covers, in sheet of 20 stamps, minisheet of 4 stamps with illustrated border and perforated souvenir sheet. 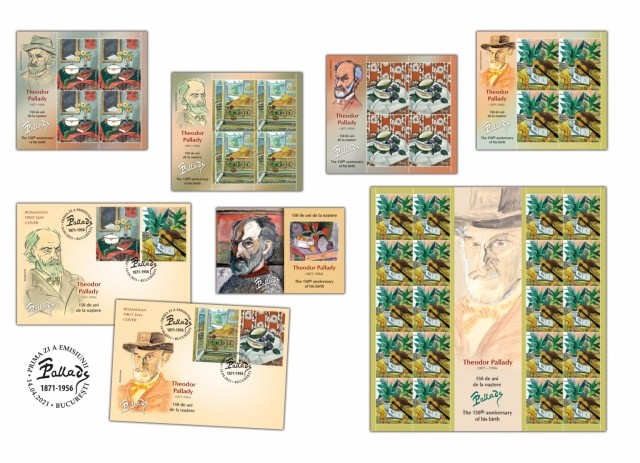 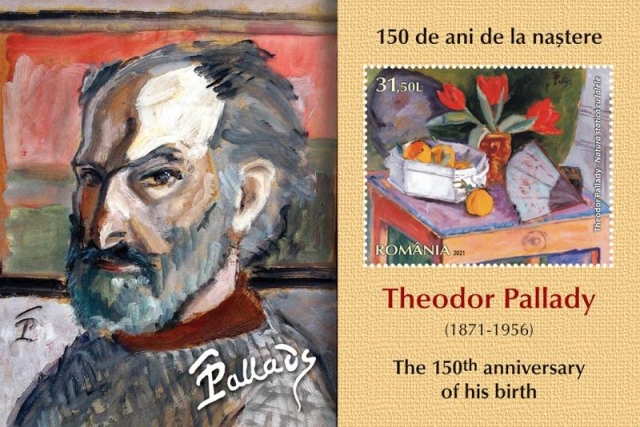 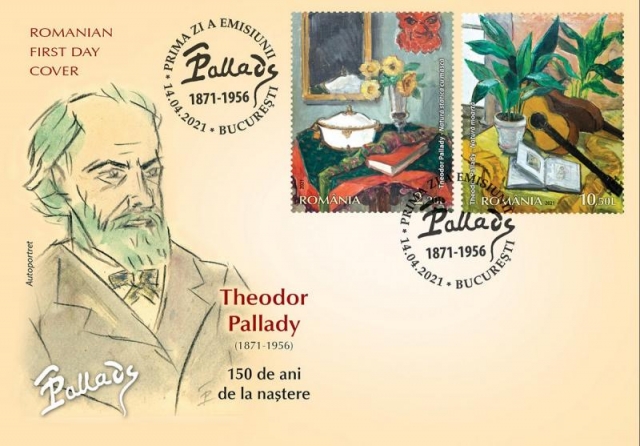 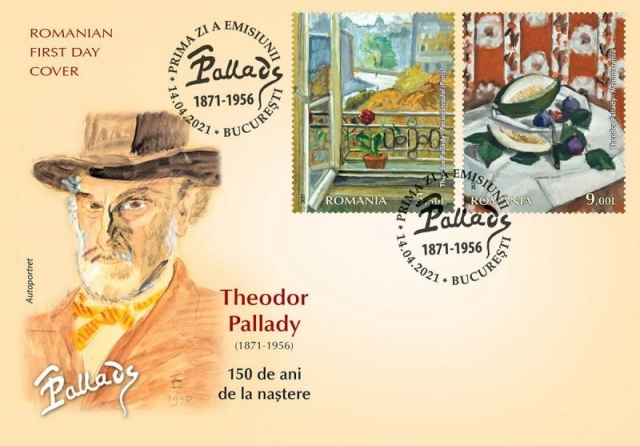 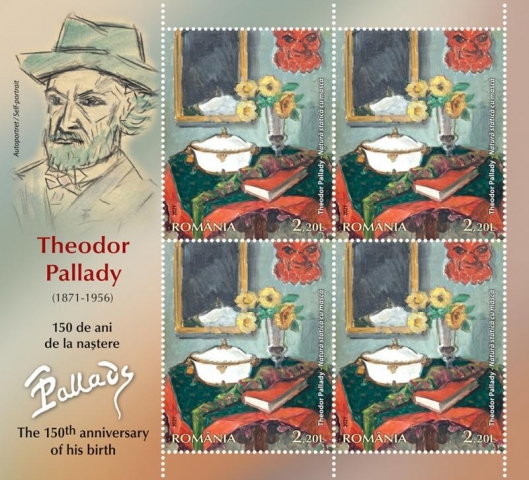 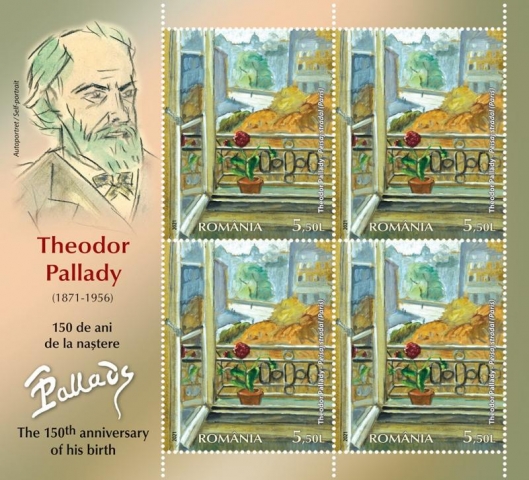 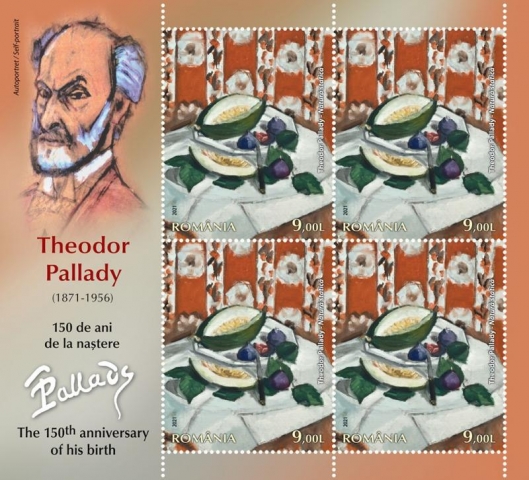 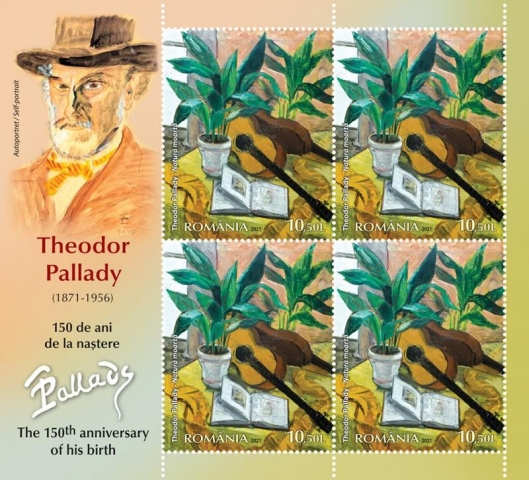 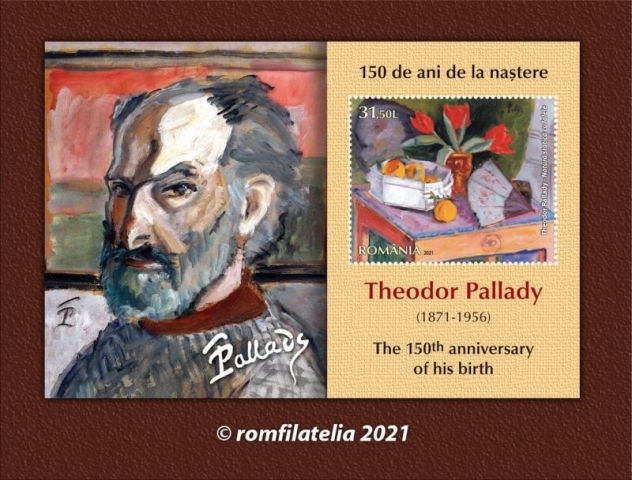 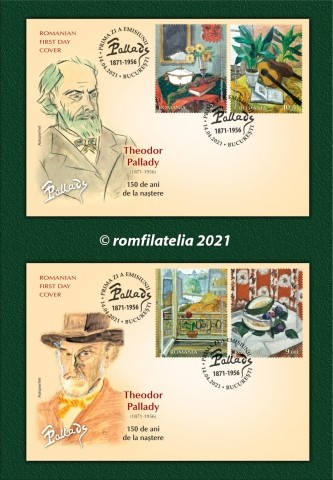 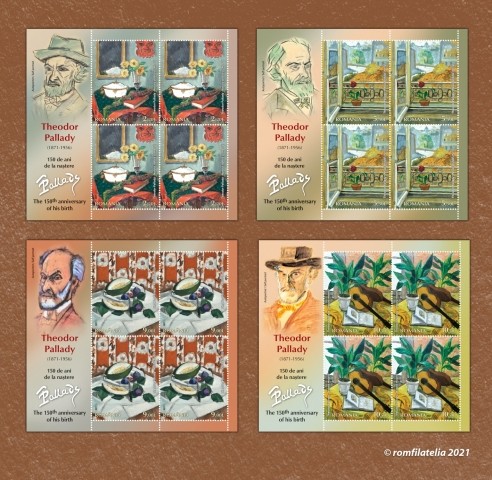 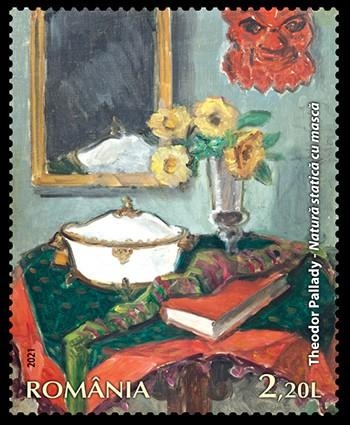 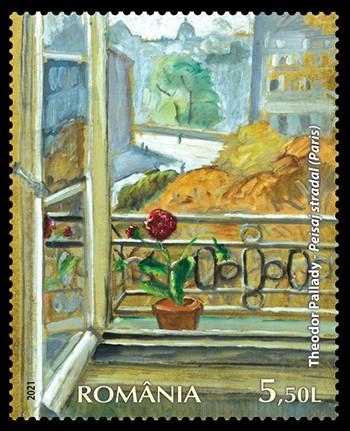 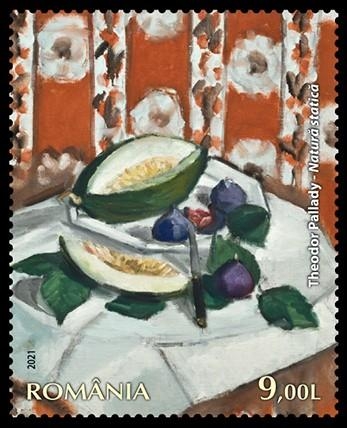 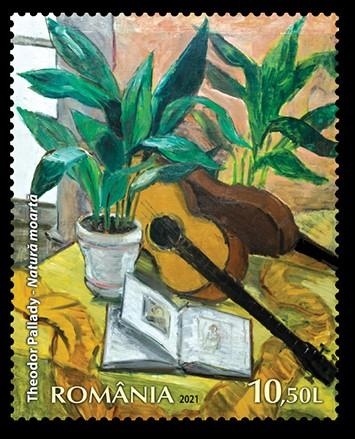