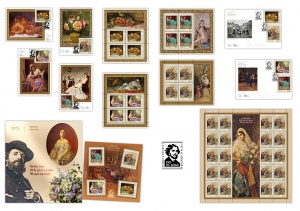 Romfilatelia introduces into circulation, on Wednesday, the 24th of March, 2021, a postage stamps issue dedicated to Romanian fine arts and to the anniversary of one of the most prominent Romanian artists: Theodor Aman, 190 years since birth.

The “Theodor Aman” Museum, the first art museum in Bucharest, officially opened on June 16th, 1908, right in the house where Theodor Aman lived and created for almost 22 years (March 20th, 1831 – August 19th, 1891). The building located on Rosetti Street (formerly Clementei Street) was designed and erected by Aman between 1868 and 1869, being to an overwhelming extent the fruit of the thinking and talent of the artist, who is the author of the architectural project, of the exterior and interior decoration (stained glass, mural painting, carved medallions on doors, furniture, panelling and stove in the workshop, ceiling stucco). The Eclectic building, assimilated mainly to the French Neoclassical typology, is also the first house-workshop in the Romanian space, conceived from the very beginning to become a museum.

Theodor Aman, our first academic painter and founder, together with Gheorghe Tattarescu, of the School of Fine Arts in Bucharest, is the promoter of modernity in the Romanian art, and his work reveals his extraordinary stylistic versatility, the artist managing to cover a very wide range, from rigorous, strict and scenographic academic works, to sensitive and fascinating pre-impressionist expressions, in which the rigour of the construction is deliberately neglected in favour of suggestion and impression.

In 1891, after the artist’s death, the house and the entire collection were bequeathed to his wife, Ana Aman, who sold them in 1904 to the Ministry of Religious Affairs and Public Education in order to open the current museum.

The museum’s collection includes works by Theodor Aman, covering various genres, styles and techniques, as well as all stages of his creation, from childhood to the end of his life: 165 oil paintings on canvas or wooden panels, 33 watercolours, 298 etching and 62 etching plates, pencil and pen drawings, sculpture, which, in addition to 3 busts, includes pieces of furniture and 4 medallions carved on the doors, mural painting and stained glass. The existing patrimony also includes the artist’s work utensils, musical instruments and weapons, several pieces of oriental or national costume, pottery, mouldings, hookahs and other personal items, which complete the collection of over 1,000 pieces of the museum.

Grapes and Apples (oil painting on canvas, 1875 – 1880?), reproduced on the stamp with the face value of Lei 2, is a static nature from the incipient period, in which the artist is tributary to a descriptive style, approaching an exacerbated naturalism, of Caravaggio nature and imposing himself by the precision of execution, by the finesse and thoroughness of visual perception, by the sensitivity with which he harmonizes chromatic values and dialogue between lights and shadows.

Woman in Mint Green Dress (oil painting on wood, 1879), illustrated on the stamp with the face value of Lei 2.20, is a genre scene painted right in the artist’s house and in which his wife, Ana Aman, is represented; it is part of the category of works that can be assimilated to a diary of those times, which offers us the opportunity to reconstruct everyday life, atmosphere, fashion, elegant interiors, refined details of decoration or architecture.

Odalisque (oil painting on canvas, 1885 – 1890?), depicted on the stamp with the face value of Lei 5.50, is a late work, of deep maturity, in Pre-impressionist treatment, which can be considered a strong showpiece in the oriental scenes created by Aman, in which one can discover an Orient viewed with affection, an Orient dominated by lyricism, calm, melancholy and sensuality.

Vase with Roses (oil painting on canvas, 1890 – 1891?), reproduced on the stamp with the face value of Lei 19.50, is a work painted in the last year of his life and; it is identified with the apogee of Aman’s static natures and belongs to the non-finito category, a concept he experiences with spectacular results. In this case, we are facing with an optical illusion generated by the 3D effect induced by the image in which the suggestion prevails and demonstrates the artist’s ability to overcome his contemporaneity.

Two other works of the artist are illustrated on the two „first day” covers of the issue.

One of them is The Aman Brothers – a fragment – (oil painting on canvas 1885?), a work perceptible as a photography with a memory role, in which the artist represents himself with his brothers, already gone from the world of the living. The characters are placed in Aman’s famous workshop, at a time in their past, when they were physically together.

Rustic Scene (etching, 1875) is executed in one of the techniques in which Aman excelled (etching), being received in the Paris Society of Etchers. He was considered until the end of his life the best Romanian painter-engraver.

Romfilatelia thanks the Museum of Bucharest for the documentary and photographic support provided for the development of this postage stamps issue.

The postage stamps issue “Theodor Aman, 190 years since birth” will be available on Wednesday, March 24th 2021, in Romfilatelia’s shops network in Bucharest, Bacau, Brasov, Cluj-Napoca, Iasi and Timisoara and online on https://romfilatelia.ro/store/.  The postage stamps issue is completed by two “first day” covers, / in sheet of 20 stamps, minisheet of 4 stamps with illustrated border and special block of 4 imperforated stamps. 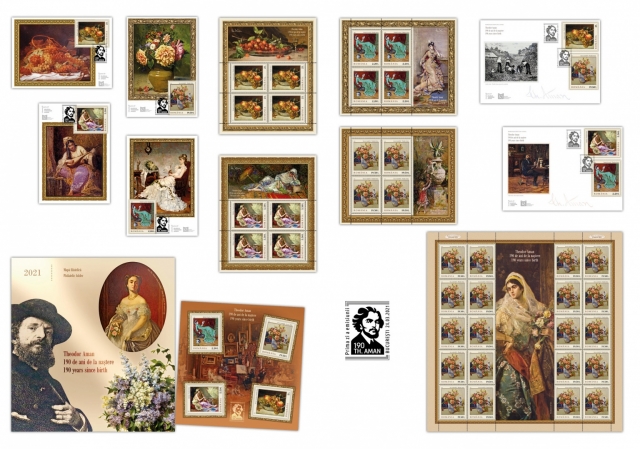 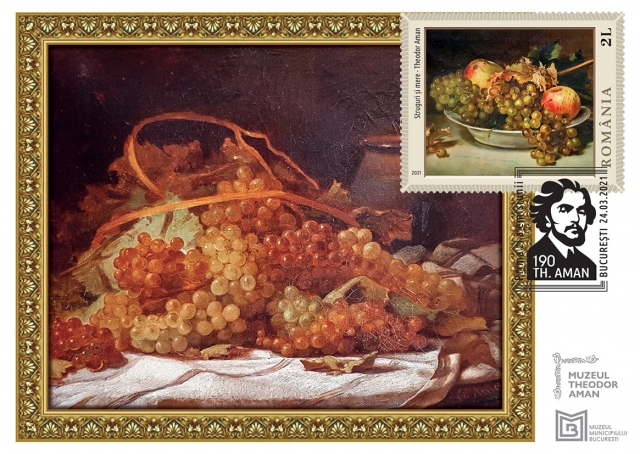 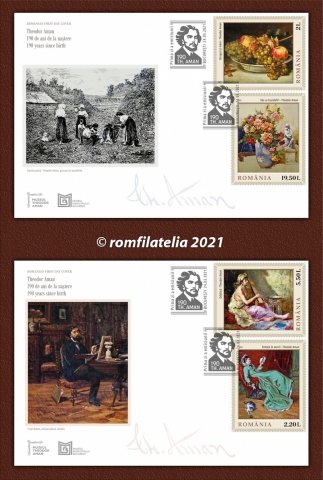 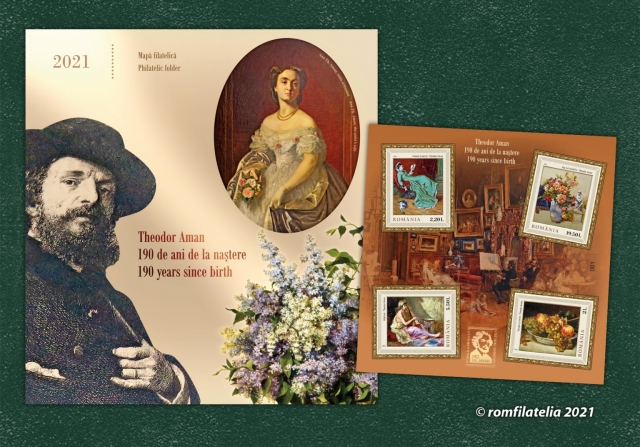 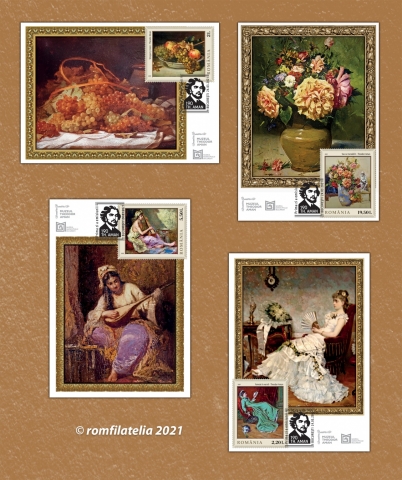 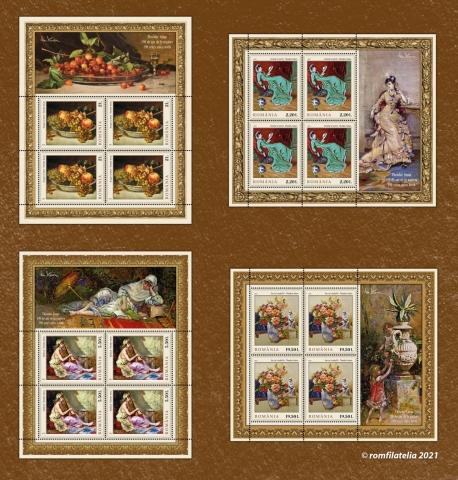 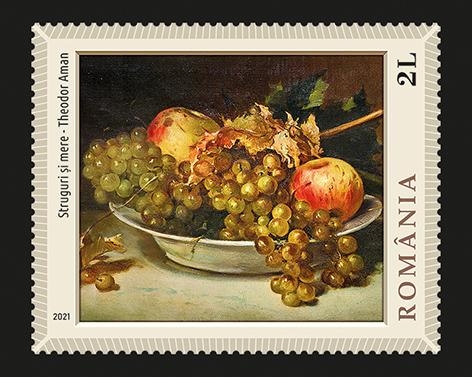 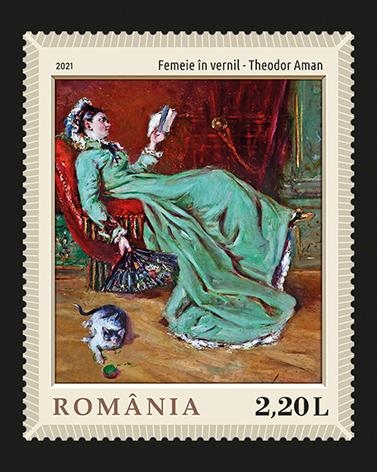 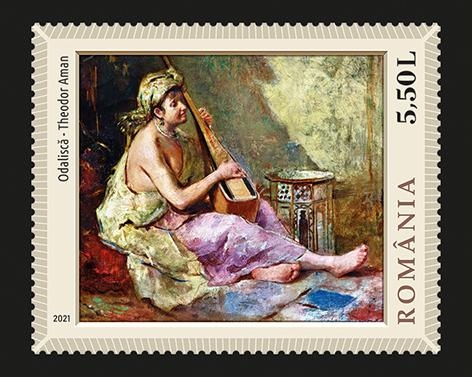 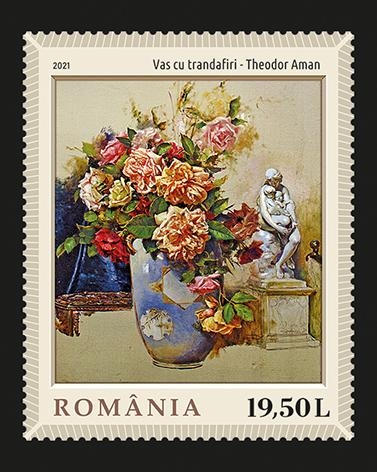 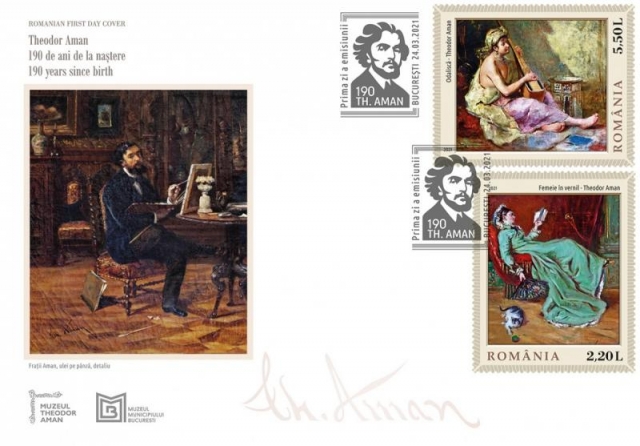 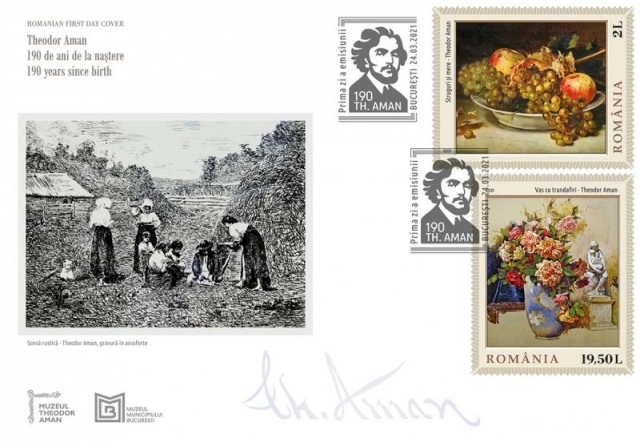