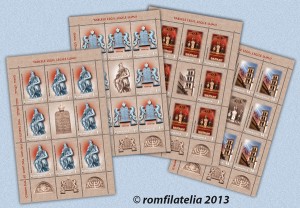 A first rank personality of universal history, worthy of the respect of all living generations along millennia, Moses exerted an overwhelming influence on the entire world through the divine Law, having a perpetual validity, given through him to the Jewish people and later included in the precepts of the Christian and Islamic religions.

Born in a period of glory in ancientEgypt, near by the giant pyramids, Moses grew up in the presence of Jews, who were enslaved by the Egyptians and forced to kill their male new born babies.

Born as Jew, Moses was found by the Pharaoh’s daughter on theNilein a little basket, that the baby’s mother had hoped to be an ark of salvation.

Raised at the Pharaoh’s court, the future liberator of the Jews, Moses “was learned in all the wisdom of the Egyptians, and was mighty in words and in deeds” (Acts of the Apostles 7 : 22).

According to the notes of historian Josephus Flavius, Moses achieved a famous victory as a military commander in a battle between the Egyptian and the Ethiopian armies.

His life miraculously changed when, on Mount Sinai, from the fire of a bush that did not burn, the voice of the One who makes Himself known through the words “I AM THAT I AM” let him know that he was chosen as a liberator of all Jews from slavery.

The discussion between Moses and the pharaoh about the liberation of Jews from slavery is successful only afterEgyptfaces the devastating effects of the 10 plagues, the last one being the one that resulted in the death of the Egyptians’ first new born babies.

Liberated from slavery, the Jews led by Moses lived in the Sinai desert for forty years, before finding their country, as promised by God.

On Mount Sinai, Moses received from God the two Tablets of the Law, on which the text of the 10 Commandments was chiseled.

The 20th chapter of the Book of Exodus (Going out) reveals the commandments in a condensed version, as found on the Tablets of the Law, and the next three chapters present them in an extended version.

The Book of the Law (Torah) reunites the first five books of the Bible and clarifies all the aspects related to the meaning of the Commandments and Obligations incumbent upon the ones who belong to the Jewish nation.

The Constitution of the Unites States of Americawas initially elaborated having as model the Tablets of the Law.

The Tablets of the Law received by Moses revealed the divine will and strongly influenced the life of the Jewish people and the religious concepts of other nations, especially Christian and Islamic, without being the fruit of any compilation (the Code of Hammurabi had appeared in 1750 B.C.).

The postage stamp with the face value of lei 1.20 reproduces the image of a drawing made after Moses’ statue, a work of the great sculptor Michelangelo Buonarroti.

The Tablets of the Law were written in stone by the Jewish God. Presented under various forms and illustrating the texts of the Ten Commandments, they may be seen in all synagogues. A suggestive image belonging to the ornamental elements of the Mogosoaia Bridge Synagogue in Bucharest is reproduced on the stamp with the face value of lei 1.40.

As He gave the Tablets of the Law, GOD ordered that they should be kept in what is referred to as the Ark of the Covenant made of shittim wood and plated in pure gold, with a massive golden cover having two golden cherubs at its ends. The ark is also known as the Ark of the Testimony.

Currently, the name of ark (Aron Kodesh) is given to the space inside the Synagogue where the TORAH scrolls are being kept as a memento of the Ark of the Covenant, which was lost after the destruction of theJerusalem temple (70 A.D.).

The image of an Ark(the Great Synagogue in Bucharest) is reproduced on the stamp with the face value of lei 3.00. (The photo was taken by Eduard Kupferberg.)

The Saint Catherine’s Monastery was built onMount Sinai and its shrine is placed where Moses heard for the first time the words of GOD, uttered from the flames of the fire where the burning bush did not turn into ashes. The branches of that bush may be seen on the back wall of the monastery and its roots are in the Holy Shrine.

On Sundays and important holidays, all hermits and anchorites living in the area come to the monastery to participate in the Holy Mass and to receive the Holy Eucharist.

The image of the monastery is illustrated on a stamp with the face value of lei 14.50.

We thank the Federation of Jewish Communities in Romania for the documentary support granted in the accomplishment of this postage stamps issue. 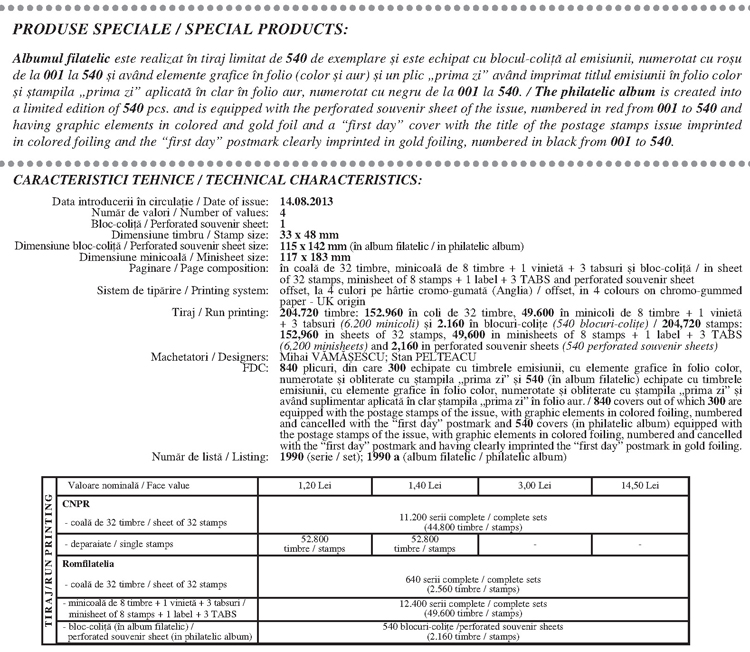