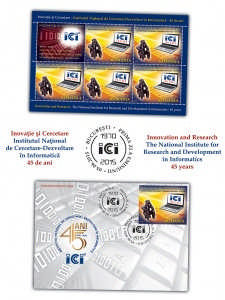 In order to achieve progress, people needed inventions and discoveries that were indispensable to the development of human society. Whether they were in the field of mechanics, electrics, medical, quantum, space, and the list could continue, innovations have led to the prosperity of all mankind.

One such example is found in Informatics, whose roots start before the 20th century and whose boundaries are still unknown. Informatics, through information and communications technology, has led to the radical change of the world, the development of the modern society as we know and perceive it today and the facilitation of all interaction processes.

An important milestone in the Romanian Informatics was the creation of the Romanian National Institute of
Research – Development in Informatics (ICI), institution which celebrates 45 years of existence in 2015, and to whom Romfilatelia dedicates an anniversary philatelic project.

Considered a real cutting edge for the Information and Communications Technology of Romania, ICI Bucharest develops national and international programmes through which it transfers technology, values the results of research, conducts consulting activities, studies of diagnosis and prognosis, as well as publishing specialized publications.

Entitled Innovation and research, National Institute for Research and Development in Informatics – 45 years, the philatelic issue, through the stamp with the face value of lei 7.60, introduces us to the world of informatics, underlining the idea of research in the field of cybernetics.

The 45 years anniversary is translated into binary code, on the screen of a widely used computer. The incursion into history is done through the image of the statue of the Thinker of Hamangia, symbol of thought, research and continuous discovery, currently part of the heritage of the National Museum of Romanian History.

The issue is completed by a first day cover, and as page composition were used the sheet of 20 stamps and the minisheet of 5 stamps + 1 label.

Starting with Friday, June 5th, 2015, the postage stamp issue Innovation and research, National Institute for Research and Development in Informatics – 45 years will be available in all Romfilatelia shops in Bucharest and countrywide.

Romfilatelia thanks the National Museum of Romanian History for the support granted in the achievement of this postage stamp issue.