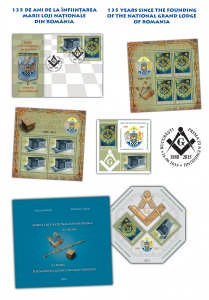 ”Know thyself, love your fellow being, aid him, all the while respecting his dignity” is the golden rule of Freemasonry, fraternal society whose origin go back in time to the very cradle of humanity, being a promoted of peace, understanding and respect for human dignity.

The first information documenting the emergence of Freemasonry in the Romanian territory appeared during the fourth decade of the 18th century. Gaining national sovereignty, which became reality as a consequence of the Independence War of 1877-1878 and of the ensuing Peace Congress, Freemasonry in Romania marks a new decisive step in its history: the founding, on 8th / 20th September 1880, of the National Grand Lodge of Romania, having Captain Constantin Moroiu as Grand Master.

With the occasion of the celebration, this year, of 135 years since the founding of the National Grand Lodge of Romania, Romfilatelia creates an anniversary postage stamp issue, with an eponymous title, thus bringing to the attention of passionate stamp collectors novel aspects of the existence and activity of this fraternal society.

The two stamps of the issue, with the face values of lei 2.10 and lei 14.50, present elements of symbolism of the National Grand Lodge of Romania – the moon, the sun and the 12 zodiacal signs, in a picturesque composition from the N.G.L.R. patrimony, whose elements try and portray the symbols of the material and spiritual universe. The letter G is a reference to the Great Architect, God.

Through the graphics of the stamps, a metaphorical bridge is created between the origins, the past and present, the illustration of the construction project of the Great Temple, which the National Great Masonic Lodge of Romania currently develops, being an element which sustains this idea.

The issue is completed by a first day cover, and as page composition were used the sheet of 32 stamps, the minisheet of 4 stamps with illustrated border and the block of 2 stamps (perforated and imperforated).

The special product of the issue is the philatelic album, created into a limited edition of 565 pcs. and equipped with the special block of 2 perforated stamps (printed on a background with an octagonal contour format) and the First Day Cover of the issue, both products being numbered.

Starting with Tuesday, June 16th, 2015, the postage stamp issue 135 years since the founding of the National Grand Lodge of Romania will be available in all Romfilatelia shops in Bucharest and countrywide.