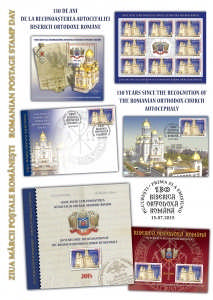 Continuing the series of postage stamp issues made under the theme Romanian Postage Stamp Day, Romfilatelia makes in 2015 an anniversary project, dedicated to 130 years since the Recognition of the Romanian Orthodox Church Autocephaly.

Repeatedly requested, the autocephaly was granted on April 25th, 1885, by issuing, in Constantinople, the Synodal Tomos for the recognition of the Autocephaly of the Romanian Orthodox Church, signed by the Ecumenical Patriarch Joachim IV together with the other metropolitans.

By attaining this status, the Romanian Orthodox Church wholly obtained the right to self-management, administrative-jurisdictional independence of any other autocephalous Orthodox Churches, remaining equal in rights and interdependence from a dogmatic, canonical and liturgical standpoint.

Through this philatelic project, Romfilatelia, having the blessing of His Sanctity Patriarch Daniel, pays special homage to this important event in the history of the Romanian Orthodox Church through the postage stamp, ambassador of the Romanian cultural and spiritual heritage.

The postage stamp issue, with homonymous title, consists of a stamp with the face value of lei 5.00 and a perforated souvenir sheet, whose stamp has the face value of lei 8.10, which reproduce in images the People’s Salvation Cathedral Ensemble, the Tomos for the Recognition of the Romanian Orthodox Church Autocephaly (1885), together with the logo and the Patriarchal Cross, symbols of the Romanian Patriarchate.

The People’s Salvation Cathedral project began to unfold in 2011, with the beginning of the construction works on the land found on the Arsenal Hill in Bucharest, and the monument will take on two patrons: “Ascension Day” (Romania’s Remembrance Day) and “St. Andrew” (Protector of Romania), while inside, approximately 5,000 faithful will be able to take part in the church service.

With the erection of this monument, a symbol of Orthodoxy in Romania, the Romanians’ dream of over a century old, to have a great Cathedral dedicated to those who gave their lives for this nation and to him who Christianized the Romanian people two thousand years ago will be accomplished. The People’s Salvation Cathedral will be a symbol of the unity and authority of the Romanian Orthodox Church, but also an expression of the prestige it enjoys in Orthodoxy and the Christian world.

The postage stamp issue is completed by a first day cover and a maximum card, and as page composition were used the sheet of 32 stamps and the minisheet of 8 stamps + 1 label.

The special product of the issue is the philatelic album, created into a limited edition of 245 pcs. and equipped with the block of 2 imperforated postage stamps and the First Day Cover having the “first day” postmark clearly imprinted in gold foiling. Both products are numbered from 001 to 245.

Starting with Wednesday, July 15th, 2015, the postage stamp issue 130 years since the Recognition of the Romanian Orthodox Church Autocephaly will be available in all Romfilatelia shops in Bucharest and countrywide.

Romfilatelia thanks His Sanctity Daniel, the Patriarch of the Romanian Orthodox Church and the Romanian Patriarchate for the support granted in the achievement of this postage stamp issue. 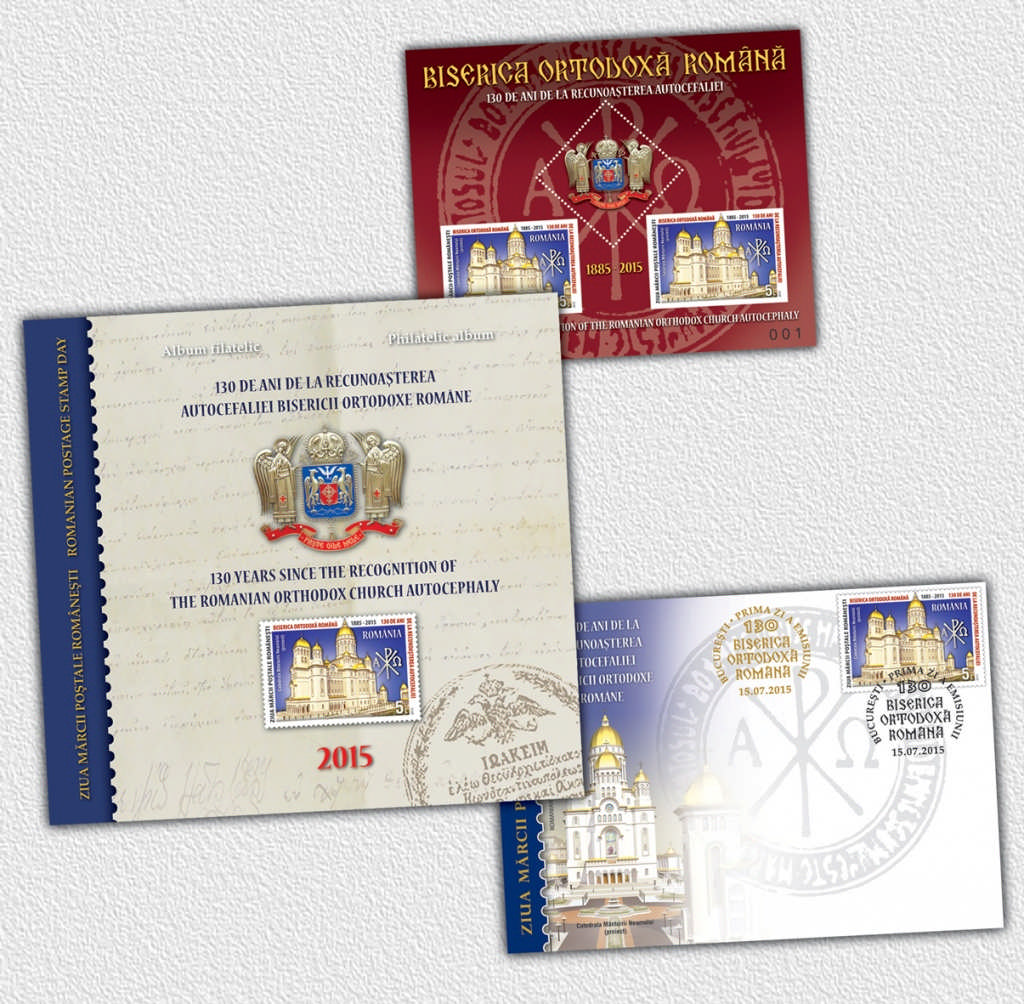