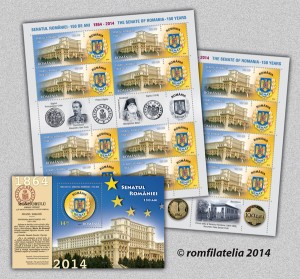 On the occasion of the one century and a half anniversary since the formal establishment of modern Romania’s fundamental institution, the Senate, which asserted oneself as an authoritative forum of parliamentary debate, contributing visibly to maintaining the balance between the political structures, to the defence of democratic rights and freedoms, and to promoting national ideals, Romfilatelia has the opportunity to introduce into circulation the issue of postage stamps dedicated to this event, entitled “The Senate of Romania, 150 years”.

A reference historical moment for the democratic reorganization of political and administrative structures was theUnionof the Romanian Principalities in 1859. In a relatively short period (1855-1866) under the rule of Alexandru Ioan Cuza, there were implemented comprehensive legislative and institutional reforms and beneficial adaptations of norms and political structures similar to those of European democratic countries. At the initiative of ruler Alexandru Ioan Cuza in 1864, following a plebiscite (May 23rd- 26th/ June 4th- 7th), Romanians have decided on a document meant to establish a new parliamentary Chamber, besides the House of Representatives. Within this bicameral system, the first Senate of Romania had worked as a balancing factor between the state powers.

Its structure added to the so-called sitting members (church leaders and heads of some public authorities), members appointed by the ruler (county representatives and senior government officials).

The Head of the Senate was Bishop Niphon, together with the vice-presidents General Ioan Em. Florescu and Constantin Hurmuzaki, being soon replaced by Nicolae Docan, who was elected by senators.

Emanuel Badescu, active presence within the Engraving Department of the Romanian Academy Library, presents in the book “All and sundry from old Bucharest” the history of the first building of the Romanian Senate, used by Legislative Chamber, starting with the year of its establishment. “At the first meeting which took place on December 6th, 1864,in the house from Podul Beilicului Street (Calea Serban Voda nowadays), whose floorwas in the shape of an amphitheatre, participated 73 persons, the first senators in the history of Romania.”

The increase of the senators’ number imposed later on the arrangement of a new place for the Senate’s meetings, starting with 1869, in the wing towards theAcademy Street of theUniversity ofBucharest building, erected by the architect Alexandru Orascu.

The Constitution of 1866, which was based on advanced democratic principles of that period, establishes the Senate as an institutional body, whose organization was based on the census suffrage (based on census or restrictions according to the people’s rank in the census, age etc.), thus reducing very much the number of people entitled to vote. Exceptions were some sitting members, such as the heir to the throne and the church leaders.

The Senate played an important role in Romanian politics, being highly involved in historical decisions, such as the Proclamation of State Independence (1877), and the consecration of the Great Union of 1918.

The Constitution of 1923 established universal suffrage for the election of members of the Senate and the Chamber of Deputies, marking a new stage in the evolution of the Romanian parliamentary. The interwar Senate included in its structure sitting senators – representatives of cults, people who had fulfilled important public functions – together with additional senators elected for a term of four years. Some senators were elected by direct universal suffrage, in electoral districts, while others were elected by local councils, professional chambers (chambers of commerce, industry, labour and agriculture), and by the professors of universities inBucharest,Iasi, Cluj and Chernivtsi.

The parliamentary activity of the period was in charge of both the unification of legislation in the entire country (after the Great Union), and the modernisation of laws according to the requirements of those times.

The reign of King Carol II cause severe damages to the authority of the Senate, the whole parliamentary activity presenting itself as simply decorative activity made by a legislative body, obedient to the Executive.

By diminishing the role of the Parliament as the promoter of democracy was roughly felt after 1940, when the activity of the Senate and the Assembly of Deputies was adjourned.

After August 23rd, 1944, the Communist regime abolished the Senate, which would be replaced later (1948) by the Great National Assembly, entirely subservient to the Communist power.

After December 1989, the Senate was re-established as representative and legislative institution, of prime importance.

There has been a return to parliamentary democratic traditions, with a bicameral Parliament, truly representative.

On May 20th, 1990, the Senate and the Chamber of Deputies have been freely and democratically elected, being given the task of drafting a new Constitution (approved on December 8th, 1991 by national referendum).

In October 2003, the Constitution was revised to harmonize its provisions with the new socio-political realities, and the requirements of the European integration process. It was established a new running mechanism of the bicameral system, which was intended to remove mediation steps, clearly separating the legislative powers of the Senate from those of the Chamber of Deputies.

Some views regarding the introduction of a unicameral system generated in 2009 a referendum, demanding the dissolution of a Chamber, but eventually it proved to lack a sound reasoning.

So far, however, in compliance with the condition imposed by the membership of the European Union,Romaniahas maintained the institution of the bicameral Parliament.

The current Senate, developing the traditions of the Romanian democratic system, participates actively in strengtheningRomania’s position among advanced democratic states.

The postage stamp of the issue, with the face value of lei 1.00, reproduces the emblem of the Senate of Romania and respectively, the building of theParliamentPalace, which hosts the actual headquarters of the Senate.

On the stamp of the perforated souvenir sheet, having the face value of lei 14.50 the emblem of the Senate of Romania is enframed in a double perforation; the background of the souvenir sheet illustrates a fragment from the Official Bulletin, in which was reproduced the speech of ruler Alexandru Ioan Cuza at the opening of the first session of the Romanian Senate, the image of the first seal of the Senate, next to an overview of the Parliament Palace. The stars reproduced on the margin of the souvenir sheet refer to the European Union, organism to whichRomania is part of since January 2007.

One of the minisheets of the issue illustrates in labels (TABS), next to the postage stamps, the reconstituted image of the first headquarters of the Senate of Romania, together with the obverse and the reverse of the 100 lei anniversary coin, issued by the National Bank ofRomania. Made of gold, the coin was introduced into circulation in a run printing of 150 pcs.

Romfilatelia thanks the Senate of Romania for the documentary assistance granted in the accomplishment of this issue of postage stamps.

We also thank the Issue, Treasury and Cash Management Department within the National Bank of Romania for supporting us with the images of the anniversary coin, adding a plus of value to the postage stamps which will reach the collections of the ones passionate by philately.
Issue date: 2014-06-17 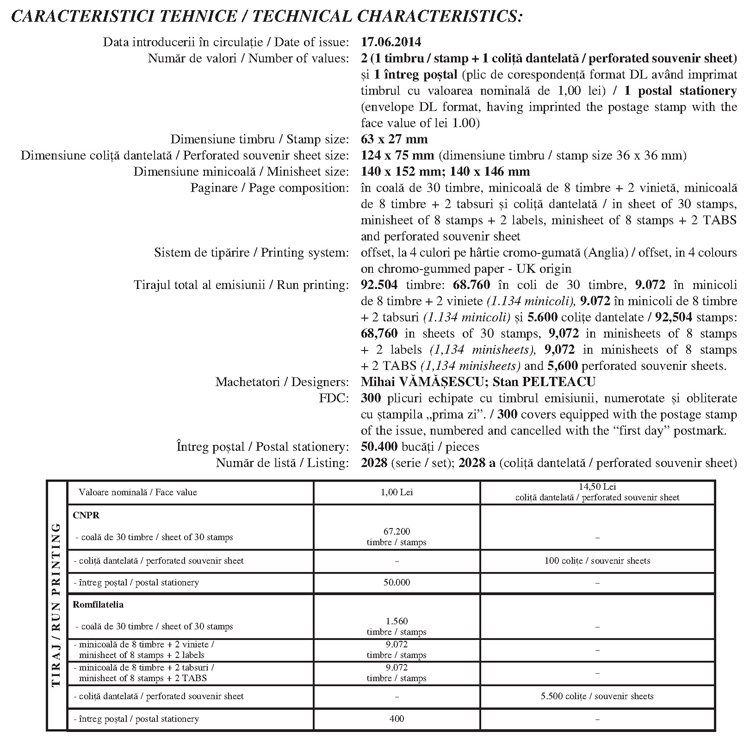