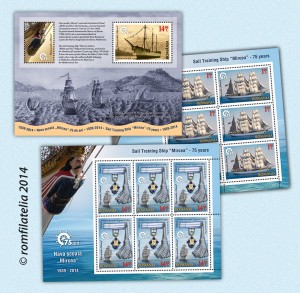 The logo of the Romanian Naval Forces was and remains the Sail Training Ship “Mircea”, a school barque vessel, on whose deck generations of sailors have completed their training and learnt the meaning of having good “tailwind” (“Vant din pupa!”).

“Mircea” was the name of the first school brig ship of the Romanian Navy in service between 1882-1939.

Launched in the autumn of 1938, at the “Blohm und Voss” shipyard in Hamburg, the three-masted shipping barque arrives in the Harbour of Constanta in May 1939.

The characteristics of the ship are the following: 81 meters long, 12 meters wide, the big mast is 44 meters high, and it reaches a 1,650-knot speed.

The ship has 23 sails measuring 1750 square meters in total, which help it reach a 10-12 knot speed, while the engine allows it to reach a 9.9-knot speed. The first journey of the Sail Training Ship “Mircea” took place between July and September 1939 on a route including the harbours of Constanta-Palermo-Toulon-Palma de Mallorca-Alger-Constanta.

During the Second World War, the ship was withdrawn on an arm of the Danube, near Braila, to avoid being bombed by the Soviets.

In 1944, it was seized by the Soviet Army that returned it to the Romanian state after 2 years long insistences of the Romanian Naval League.

The solemn welcoming of the ship, in 1946, in the Harbour of Constanta was also witnessed by the presence of King Mihai and members of the government.

Within the 75 years since its arrival in the Harbour of Constanta, the ship “Mircea” was involved in only one major incident at sea.

The event took place in 1965, in the Bay of Biscay, when the cables it was towed with broke because of a powerful storm when the wind speed reached 160 km/h, and the waves were over 14 meters high.

The brig was heading to Hamburg where it was to enter in a process of major repairs. For four days, the ship had had to outbrave the fury of the nature until the French tug “Rinoceros 4” arrived, towing it to the harbour of Brest.

It needs to be said that during the entire storm, the crew refused to leave the ship.

The longest journey of the Sail Training Ship “Mircea” took place in 1976 when, between March 4th and September 30th, it travelled about 20,000 nautical miles across the Atlantic Ocean, to participate in the festivities organised on the occasion of the United States Bicentennial.

The celebration of 75 years since the Sail Training Ship “Mircea” began to serve the Romanian Navy is an opportunity for Romfilatelia to introduce into circulation a postage stamps issue dedicated to the Black Sea Regatta, event which will be held in Constanta, between April 30th and May 27th 2014 (SCF Black Sea Tall Ships Regatta).

The event will bring together a fleet of 40 sailing vessels from all over the world, which will stop by the ports of Varna, Novorosiisk and Sochi before reaching Constanta.

Romania, which is for the first time the host of such an event, will be represented not only by the Sail Training Ship, “Mircea” but also by the sailing vessel “Adornate” and the yacht “Apollodor”.

The Regatta is organised in Romania by “Navigator Yacht Club” in collaboration with “Mircea cel Batran” Naval Academy, the National Company “The Maritime Ports Administration” and the City Hall of Constanta, with the international support of Sail Training International.

The postage stamp with the face value of lei 1.00 presents the Sail Training Ship “Mircea” in a training mission in present time, having all its sails in the wind.

The second postage stamp, with the face value of lei 14.50, illustrates in foreground the Maritime Virtue Order, in Officer Degree with Peace Symbol, conferred to the Sail Training Ship “Mircea”, by the Decree no.304/2014, for the first time in the ship’s existence.

The image reproduced on the postage stamp of the souvenir sheet, presents the image of the Sail Training Ship “Mircea” at the moment it was launched in the autumn of 1938, leaving the “Blohm und Voss” shipyard in Hamburg. On the label of the souvenir sheet there is a painted wooden ornamental sculpture representing the bust of the Ruler Mircea the Elder.

We thank the Romanian Presidency — Chancery of Orders, “Mircea cel Batran” Naval Academy in Constanta, SCF Black Sea Tall Ships Regatta 2014 and the Romanian Navy Museum for the support granted in the accomplishment of this postage stamps issue. 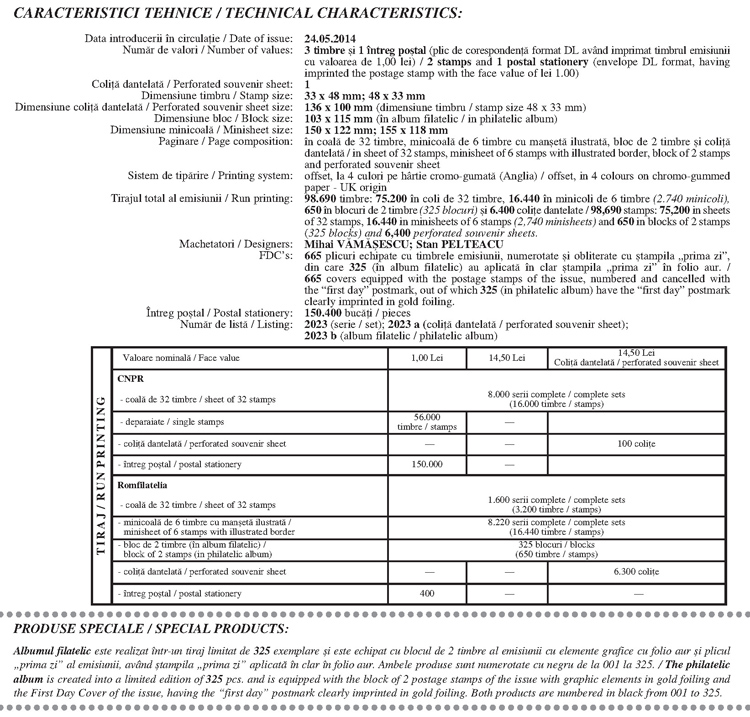