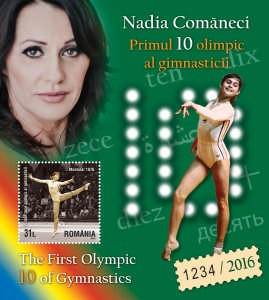 The press of 1976 would hail after the accomplishment that stunned the world of gymnastics and entered the history of Olympic sports, turning a 14 year old girl from Onesti (Romania) into an icon of the Romanian and world gymnastics. On July 18th, 1976, Nadia Comaneci revolutionized sports universe with a perfect performance: “absolute” 10 at the Summer Olympics in Montreal.

40 years later since the first Olympic 10 of gymnastics, Romfilatelia honours the great champion and her unmatched performance by a special postage stamp issue suggestively entitled The first Olympic 10 of gymnastics, Nadia Comaneci, a project through which all sports fans and not only, relive the excitement of that Olympic summer day, when a child changed an entire world. The issue is available in Romfilatelia’s stores in Bucharest, Bacau, Brasov, Cluj-Napoca, Iasi and Timisoara starting with Monday, July 18th, 2016.

After her extraordinary performance in Montreal, the Romanian gymnast made history as the first athlete with a perfect exercise, two elements currently bearing her name: “Comaneci Dismount” and “Comaneci Jump”.

Nadia Comaneci’s achievements brought the gymnast the title of best Romanian athlete of all time, being inducted into the International Gymnastics Hall of Fame in 1993. For Romania and Romanians everywhere, Nadia is part of the national heritage. Moreover, the gymnast’s name is associated with Romania more than any other, but the love, admiration and appreciation for this great champion exceed the country’s boundaries for sure.

The philatelic project which Romfilatelia is honoured to dedicate to the “absolute” athlete consists of a stamp and two souvenir sheets, a perforated one, numbered in black, and an imperforated one, numbered in red, which suggestively illustrate the moment of July 18th, 1976, when Olympic gymnastics attained perfection and was dominated by her impeccable technique. The illustrated border of the perforated souvenir sheet features in the background the word ten in the six official UN languages – English, French, Spanish, Russian, Arabic and Chinese. The image of the 14 year old girl is brought into the present by the current image of the champion.

The two souvenir sheets bring philatelists the gift of two premieres – a symbolical run printing of 2016 pcs., suggesting the marking of 40 years since the first Olympic 10 in gymnastics this year, as well as two types of special paper, on which the souvenir sheets are printed and which present security features visible to the eye and respectively, visible under ultraviolet light.

Romfilatelia thanks Mrs. Nadia Comaneci, the Nadia Comaneci Foundation in Romania and the ”Carol I” Central University Library for the images (photos from the champion’s archive) and the documentary support granted in the achievement of this postage stamp issue.