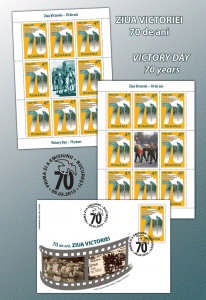 Promoter and messenger of history, the stamp often marked highly significant events that have influenced the course of human evolution and have created the history pages thoroughly studied today. Therefore, the anniversary of a moment considered the end in Europe of one of the greatest world conflagrations deserves to be included in the Romanian philatelic heritage.

Thus, Romfilatelia dedicates the postage stamp issue Victory Day – 70 years to the 70-year celebration of the capitulation of Nazy Germany, a moment viewed as the end of the World War II in Europe.

The stamp of the issue with the face value of lei 4.30 depicts the anniversary number 70, symbolizing the period since the defeat and the capitulation of Nazy Germany, along with a white dove transmitting the message of peace. Scenes of war can be seen on the background of the number 70.

Because, 70 years ago, Germany was forced to sign the surrender twice – once to the Allies, at Reims, and the second time, one day later, in the presence of Soviet Marshal Gheorghi K. Jukov, in Berlin, the Victory Day is celebrated differently in the world: the West marks this day on May 8, while the former communist countries commemorate it on May 9.

In Romania, the celebration of Victory Day on May 9 coincides with Europe’s Day, an annual celebration of peace and unity in Europe. For the Member State of the European Union, this day is also known as the Schuman Day, commemorating the statement of the French Foreign Minister Robert Schuman, who proposed the creation of the European Coal and Steel Community, the cornerstone of the European project. Moreover, May 9 has a special historical significance for our country at international level, Mihail Kogalniceanu proclaiming the independence of Romania on May 9, 1877. The next day, on May 10, the act acquired the force of law, being signed by Prince Carol I.

Technically, the issue is completed by a first day cover, and as page composition were used the sheet of
32 stamps and the minisheet of 8 stamps + 1 label (2 models).

Starting with Saturday, May 9, 2015, the postage stamp issue Victory Day – 70 years will be available in all Romfilatelia shops in Bucharest and countrywide.

Romfilatelia thanks the “King Ferdinand I” National Military Museum and photographer Lucian Tudose for the documentary support granted in the achievement of this postage stamp issue.