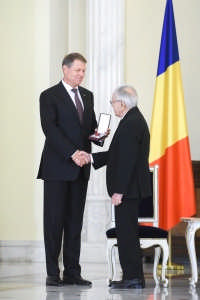 On Monday, September 26th, 2016, the Unirii Hall of the Cotroceni Palace hosted the decoration ceremony of Mr. Neagu Djuvara and Mr. Mihai Sora, an event during which Romania’s President, Klaus Iohannis, offered the National Order “The Star of Romania” with the rank of Knight to the two personalities.

Emotion and pure joy marked the festive moment, Mr. Neagu Djuvara and Mr. Mihai Sora being visibly touched by the ceremonial act and overwhelmed by the “weight” it has at a both personal and historical level. The event is all the more important as 2016 marks both the centenary of the two great personalities of the Romanian culture and their decoration by the head of the state.

Next to the presidential advisers who participated at this important moment, the event also reunited other guests such as Deputy Prime Minister and Minister of Economy, Trade and Relations with the Business Environment, Costin Borc, actors Victor Rebengiuc and Mariana Mihut, writer Gabriel Liiceanu, family members of the two personalities and media representatives.

Through its specific activity, that of promoting the national values and symbols on postage stamps, Romfilatelia joined the institutions and officials that celebrate the two Romanians and their illustrious professional career, by designing the special philatelic project “People, facts and values” and honouring their life’s work, professionalism, dedication in contributing to the country’s culture and history and last but not least, their role in strengthening the Romanian society.

Within the campaign above mentioned, two postal stationeries with fixed stamp were dedicated to Mr. Neagu Djuvara and Mr. Mihai Sora, thus treasuring a century of fundamental values in the Romanian philatelic heritage.

Ms. Cristina Popescu represented Romfilatelia at the decoration ceremony, being honoured to support Mr. Djuvara and Mr. Sora on this special occasion. During the solemn moment, also took place the presentation of the postal stationeries with fixed stamps, an opportunity for the guests to see them exhibited.

The end of the event offered the participants the possibility to take some photos in the company of the two guests of honour of the Cotroceni Palace, thus cherishing and keeping the decoration ceremony as a priceless memory.

Romfilatelia will continue to take pride and responsibility in its role to preserve in the national philatelic heritage the most important values of Romania, noble spirits who deserve the recognition, admiration and respect of an entire nation.