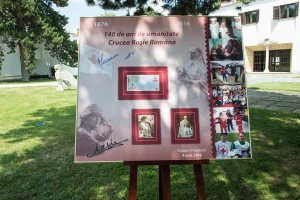 Monday, July 4th, 2016, at the Elisabeta Palace was hosted the anniversary event dedicated to the Romanian Red Cross, marking 140 years since the organization’s establishment.

Among the guests present at the event that was held in the palace’s court were Sergiu Nistor, presidential adviser, H.E. Hans Klemm, US ambassador in Romania, Adrian Curaj, minister of national education and scientific research, members of the Diplomatic Corps accredited to Bucharest, personalities of the civil, cultural and artistic society, volunteers of the Romanian Red Cross, as well as representatives of the media.

The ceremony started with the playing of the royal anthem, this moment being followed by the speech of HRH Princess Margareta, Custodian of the Crown and president of the Romanian Red Cross, who delivered a short message on the organization’s anniversary.

“The Romanian Red Cross celebrates 140 years of existence. The Royal Family stood by the Romanian Red Cross even from its foundation, on July 4th, 1876, during Carol I’s reign”, declared HRH, later on continuing with a few words about the organization’s current activity: “Today, our volunteers continue, with passion and devotion, the mission of their ancestors, respecting the Fundamental Principles of the International Movement of Red Cross and Red Crescent. […] I hope that future generations will carry on this purpose responsibly and generously.”

The Romanian Red Cross’ director, Ioan Silviu Lefter, took the floor conveying to guests that the organization has conducted an uninterrupted humanitarian work for 140 years, this being possible with the help of volunteers and partners who carry on the mission of the Romanian Red Cross: “It is a historic moment which we ought to honour respectfully and in full gratitude to all those who throughout this history were involved with devotion and spirit of sacrifice in fulfilling the humanitarian work of the Red Cross, which is to alleviate human suffering.”

“Every year, the Romanian Red Cross history was intertwined with the history of Romania, facing challenges, serving humanity in its most vulnerable moments. […] During all this time, the Romanian Red Cross has kept its core values intact: humanity, impartiality, neutrality, independence, volunteering, unity and universality”, continued Ioan Silviu Lefter. Finally, the director of the Romanian Red Cross sent a message to everyone present at the ceremony, namely to keep supporting the work of the organization in the future: “In Romania the Red Cross is a symbol due to which people feel safe.”

Responding to the invitation to join the festivity dedicated to the Romanian Red Cross, Romfilatelia was honoured to mark, by its specific activity, this anniversary moment in the organization’s history, celebrating its humanitarian mission through a postal stationery with a special graphic and artistic design.

“Thank you, in the name of Romfilatelia, for the honour of having us here, at this important anniversary event. Today we mark with emotion 140 years of humanity of the Romanian Red Cross, a moment that will be also registered further on  in the collections of the many people who share the passion of collecting stamps, through the anniversary postal stationery made on this occasion.”, said Cristina Popescu, Romfilatelia’s CEO.

The CEO of Romfilatelia continued by addressing a few words about the stamps which over time honoured the mission of Romanian Red Cross, the first such stamps being issued 75 years ago: “ Even since 1941, the stamps have marked important events of our history, where Queen Mary was constantly by the side of the sick and the needy, with her heart and presence. The postage stamp issues have registered these events in time and, last but not least, I’d like to mention the project launched in 2011, on the occasion of another anniversary of the organization, namely 135 years since the establishment of the Romanian Red Cross.”

In the end of the philatelic moment, HRH Princess Margareta, Custodian of the Crown, and the director of the Romanian Red Cross were invited to sign the philatelic panel dedicated to the celebration of 140 years of humanitarian work of the Romanian Red Cross, occasion on which the guests were able to see and admire the anniversary postal stationery.

The two personalities received, on behalf of Romfilatelia, a painting with the minisheet of the postage stamps issue The Romanian blouse, a national treasure, showing Queen Mary in a different picture, that of promoter of the Romanian culture and traditions, the wearing a costume from Dolj County.

Romfilatelia, by the mission it has assumed, that of treasuring the Romanian postage stamps, has become, over time, an important messenger of identity values, adding significant events to the national philatelic patrimony and thus enriching the national heritage of values and symbols.