The coin is a monetary symbol with established form, weight and title, made of metal (gold, silver, copper, alloys of common metals) and it serves as a means of circulation and payment.
Alongside the flag, emblem, anthem and stamp, the coin is a sovereignty symbol of a state.
On the Romanian territory, the use and circulation of the coin was chronicled in the 6th century B.C.
In time, on the current Romanian territory, Greek bronze and silver coins have circulated, chronologically. Then followed the coins from the Geto-Dacian period of Greco-Macedonian type. In the following centuries, mainly Byzantine coins circulated on the Romanian territory. During the Middle Ages, in the Romanian Countries circulated Bulgarian, Venetian, Polish, Occidental, but also Romanian coins starting with the second half of the 14th century.
The Prince Alexandru Ioan Cuza wished, in the beginning, to call the national coin &#8220;romanat&#8221; or &#8220;roman&#8221;, but finally they decided that &#8220;leul&#8221; (the lion) was more appropriate. The name of the national coin was inspired from the &#8220;taler&#8221; carrying the face of a lion on the back side, called &#8222;lowentaler&#8221; issued in Holland.
The golden coins that are presented in the current postage stamps issue cover the period of years 1868-1940 and represent a philatelic premi&egrave;re. This is the first time when their image is reproduced on postage stamps.

LEI 20 CHARLES I 1868  (21 mm;  6.45 g;  900&#8240;  gold, 100&#8240;  Copper).
Around 200 pieces have been coined. The problem of the sovereignty of Romania is proven by the history of this golden coin of Lei 20. In April 1867 a law was enacted, stipulating that the monetary unit of Romania was the Leu and authorizing the minting of some golden coins of Lei 20, 10 and 5, silver coins of Lei 2, 1, *Bani 50, and common metal coins of Lei 10, 5, 2 and  *Ban 1. They were going to carry on the front the emblem of the Princedoms and the face value on the back, the Turkish government not agreeing to use the effigy of Prince Charles I, which was considered to be an act of independence of the Princedoms. However, the Government of the Princedoms decided to issue around 200 gold pieces with the effigy of Charles I and with no indication of the submission to the Gate. Moreover, several pieces were sent to the Turkish Government in 1869, arousing the diplomatic protests of the Gate, but also of Austria. Among the approx. 200 coins, 100 were distributed to the Romanian officials, and 100 were buried in the foundation of the Peleº Palace of Sinaia (see &#8220;Modern Romanian Coins – 1867-1966&#8221;- by Aurelio Rãuþã, published in Salamanca – Spain, in 1974)

LEI 50 CHARLES I 1906  (40 mm; 16.13 g).
Front side: King Charles in uniform and the signature of carver, A. Michaux.
Back side: Prince Charles I on horse, dressed for the war, in the memory of the Independence War of 1877.
The piece, dedicated to the 40th anniversary of the  regency of Charles I, was coined in Brussels and it is a rare piece.

LEI 50 FERDINAND I 1922  (40 mm; 16.13 g).
Front side: The bust of King Ferdinand I, dressed for ceremony.
Back side: The bust of Queen Mary, dressed for ceremony and the date when the two of them were crowned as sovereigns of the United Romania (1922, Alba Iulia).
Commemorative piece dedicated to the crowning of Alba Iulia of 1922.
Coined in Paris and it is very rare.

LEI 100 CHARLES II 1939 (35 mm; 32.50 g).
Front side: The effigy of King Charles II to the right, with the legend of CHARLES II KING OF THE ROMANIANS.
Back side: Archangel with open wings, holding Romania´s shield.
Extremely rare.

LEI 100 CHARLES II 1940  (35 mm; 32.50 g).
Front side: The head of King Charles II.
Back side: Oak crown to which the shields with the emblems of the six provinces of the United Romania are hanged in circle, in the middle of which there is the royal monogram.
Jubilee coin celebrating the anniversary of the 10th year of reign of King Charles II (8th of June 1930 – 8th of June 1940). It is very rare.

The postage stamps issue was made based on the documentary materials and on the images provided through the benevolence of the Numismatic Cabinet within the Romanian Academy Library. 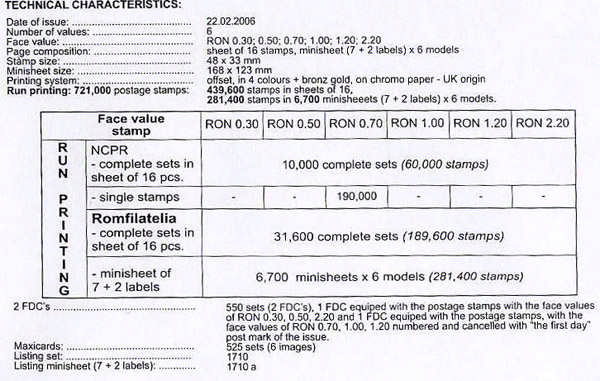