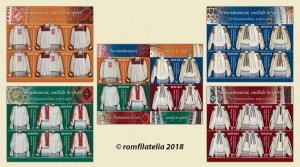 In the Centenary year of the 1918 Great Union, Romfilatelia introduces into circulation the postage stamp issue The Romanian Blouse, unity in spirit, dedicated to the most important piece of the traditional Romanian female costume.

The stamps of the issue illustrate blouses from the regions of Romania, as follows:

The folk blouses that is specific to Crisana (Bihor), respectively Maramures (Oas) regions are represented on the stamp with the face value of Lei 3.

Two other traditional pieces belonging to the regions of Bucovina (Suceava) and Moldova (Vrancea) are illustrated on the stamp with the face value of Lei 5.

The blouses specific to Banat (Lugoj) and Transylvania (Padureni, Hunedoara County) regions are represented on the stamp with the face value of Lei 7.

The fourth stamp of the issue, with the face value of Lei 11.50, illustrates the blouses specific to Oltenia (Mehedinti) and Muntenia (Ramnicu Sarat) regions.

On the First Day Cover of the postage stamps issue is represented the blouse from Dobrogea region.

Originated in the ancestral homeland of Geto-Dacian civilization, the Romanian costume has continued its course until today, presenting two essential characteristics: its unity and its continuity. After the Great Union of 1918, the blouse, basic element of the traditional female costume, was promoted as a unitary symbol of the Romanians.

The authentic Romanian blouse was made of sufficiently soft linen, the so-called “homemade cloth” or “whitened cloth”, made from flax, hemp or wool, woven with the help of the two-wire weaving loom. Later, the blouse or the embroidered shirt was also made from cotton spunned by distaff. In addition to color and fabric, the features of the blouse are also given by stitches, incret (the ornamentation on the sleeves of the Romanian blouses, made between the „altita” and „rauri”), altita (the embroidery at the top of the sleeve), rauri (vertical embroidery which runs like a river across the chest of the Romanian blouse) and seams.

In the ancient clothing of Crisana (Bihor), the women’s shirt, called Romanian peasant blouse, complies with the traditional tailoring, with all the widths of cloth pleated under a collar, the bottom being attached to the ciupag (the section of the blouse that is positioned above the waist belt). The sleeves of this type of shirt, ended with a lining/flounce, are sewn together with scafatura (a stitch on the edge of the pleats) and the ornamentations are disposed in two variants: in three horizontal strips – with arms or “jure” – on the shoulder, elbow and under the elbow or down on the hand (vertical line of motifs, from shoulder to flounce).

Singular in terms of tailoring type and artistic expression in the ensemble of the Romanian folk costume, the woman’s blouse with shirtfront from Oas, Maramures is a unique creation. The shirtfront is a rectangular inset from which the opening around the neck has been cut; the neck of the shirt is at the back. The cloth sheets that form the face, the back and the sleeves are attached in a folded manner to this inset.

The blouse from Bucovina, Suceava remarks itself by a large decorative diversity of the compositions that adorn the chest and the sleeve, resulted from the combination of a narrow chromatic palette.

In Moldova, the ornaments of the blouse from Vrancea are linked with the prosperous economic status and a special refinement. The use of the metallic thread ennobles the sumptuous embroidery on the sleeves, chest, back and collar.

The features of the blouse from the rich Banat Plain are the gorgeousness and brilliance of the embroidery made with golden threads in Turkish point-style. Strongly highlighted, this type of embroidery is also known as broderie grasa pe scris.

In Padurenii Hunedoarei of Transylvania, an archaic shirt made from hemp is worn, that integrates itself in the Carpathian type, with all the widths of cloth folded around the neck and with the bottom sewn to the ciupag. What distinguishes this type of shirt is the decorative composition of the sleeves. Altita padureneasca (the embroidery at the top of the sleeve) consists of a variety of motifs, positioned longitudinally along the sleeve towards the chest (named “tabla”).

The folded-around-the-neck shirt worn in Mehedinti, Oltenia, achieves remarkable levels of artistic performance, impressing with the fineness of the extremely painstaking embroidery points (using one yarn) and the spectacular combinations of geometric motifs used to adorn the sleeves, chest and bottom.

In case of the costume in Muntenia (Ramnicu Sarat, Buzau County) one can notice the decorative composition of the blouse, especially the long sleeve with narrow altita, white incret and rauri. The embroidery point used is the loop one (“olden”), made with cherry wool.

In Dobrogea the shirt is straight, tailored from white cotton plain cloth or from “chirachie”/bordered cloth with striped lines. Depending on the cut, the ornaments are distributed either according to the traditional structure – chest, sleeves, around the neck of the shirt and the bottom – or it focuses on the edges of the inset, around the chest opening and on the bottom side of the sleeves. The chromatics is reduced to the alternation between red and black.

By the embroidered motifs and symbols, the Romanian Blouse is more than an article of clothing, it is a national symbol, by whose perfection and balance succeeds in maintaining the constancy of the Romanian people unity.

Romfilatelia thanks the National Village Museum “Dimitrie Gusti” for the documentary and photographic support provided for the achievement of this postage stamp issue. 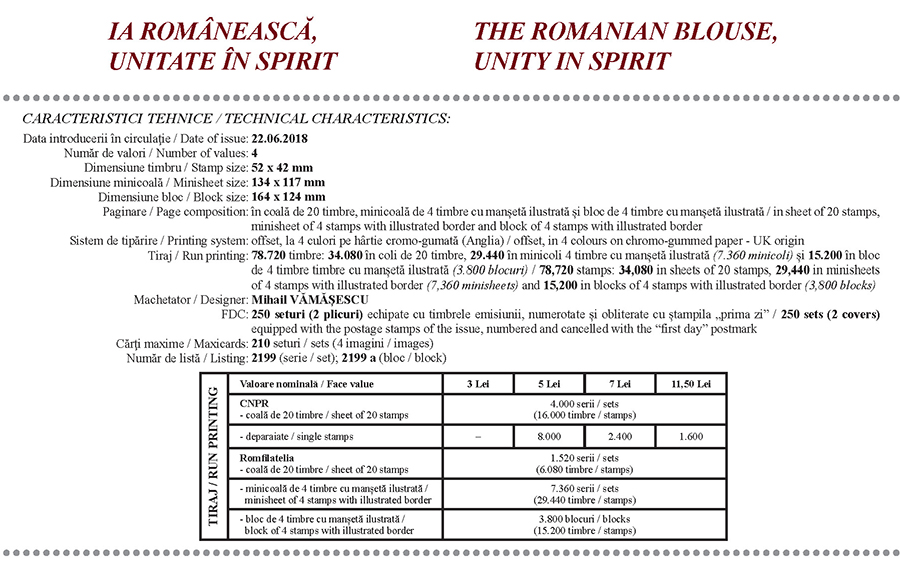