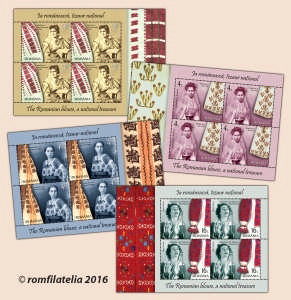 Balance and perfection. As simple as its cut is, so is its profound meaning. This is the traditional shirt, bequeathed by our ancestors, which is carefully worn from one generation to another to transmit and preserve as much of its spiritual symbolism and energy.

The Romanian blouse, the basic piece of the female folk costume is more than a piece of clothing; it is a national symbol, a story and a history book.

It is in fact a traditional Romanian shirt, made of hemp, flax, cotton, wool or raw silk, short, up to the waist, also called “ciupag” or long, with a hem.

To achieve the Romanian blouse, materials are carefully chosen and the placement of each model is strictly established. The trim, colours and materials from which a Romanian blouse was made would represent a social label of age, civil and marital, religious and regional status.

Unmarried girls wore happy and bright coloured Romanian blouses, which showed off their purity, youth and beauty. Married women wore them sewn with neutral, earthy colours, being associated with the familial fulfilment and steadfastness. Old women also wore bright colours, but adopted neutrals as a symbol of mourning after many were widowed during the wars.

It was worn by women from the countryside or the city, but also by representatives of large families in our history.

The postage stamp issue THE ROMANIAN BLOUSE, A NATIONAL TREASURE, illustrates in an original graphical approach four female Romanian personalities who have worn the Romanian blouse with pride and made it known abroad.

The stamp with the face value of lei 3.50 presents Queen Elisabeta of Romania wearing a Romanian blouse from Romanati, Olt county. Often the Queen would encourage her ladies-in-waiting to clothe themselves in traditional folk costumes. The blouse, specific to the Romanati area has a small collar and embroidery on the top of the sleeve, made up of ribbons braids in a repeating “S” pattern. The decorative motifs are geometrical, floral and anthropomorphic, while chromatically the ultramarine colour predominates, with alternate gold metallic thread.

The stamp with the face value of lei 4 represents Queen Marie of Romania wearing a Romanian blouse from Dolj county. She dressed in traditional garb, along with members of the royal family or the ladies of the court, truly admiring the Romanian traditions and the folk costume which she made popular across the national borders. The blouse from the Dolj area is characterized by chromatic harmony, vivid tones of blue, red and white, the varied decor primarily made up of geometric motifs like diamonds, crosses and spirals. The ornamentation is arranged particularly on the sleeve, on the “altita” (the embroidery at the top of the sleeve), on the “incret” (the ornamentation on the sleeves of Romanian blouses, made between the “altita” and “rauri”) and on the “rauri”(vertical embroidery which runs like a river across the chest of a Romanian blouse).

The stamp with the face value of lei 4.50 represents Smaranda Braescu wearing a Romanian blouse from Muscel, Arges county. Smaranda Braescu was the first Romanian woman paratrooper with a patent, well known at that time also her love of the traditional folk costume, which she considered the best gala outfit, both at home and abroad. The Muscel female shirt is made of raw silk, pleated at the neck, with a drawstring over the folds. The material used for sewing is the “arnici”, a twisted and colourful cotton strand, painted scarlet, black, red, burgundy and purple colours, specific to the Muscel area.

The stamp with the face value of lei 16 represents Maria Tanase wearing a shirt from Padureni, Hunedoara county. The Lady of the Romanian song was a lover of national traditions and took the Romanian blouse abroad, where it was admired and applauded. Maria Tanase wears a shirt in a colour combination of white, black and red. Amid these colours specific to a Padureni blouse, discreet tones of purple, blue and green appear. The blouse’s ornamentation is made in geometric motifs: large diamonds, squares, diamonds halves which succeed each other compactly on the entire sleeve, giving the sow work a rich, embossed look.

Romfilatelia thanks the Royal House of Romania, the National Museum of Romanian History, the “Dimitrie Gusti” National Village Museum, the National Romanian Peasant Museum and Mr. Emanuel Badescu for the documentary support granted in the creation of this postage stamp issue. 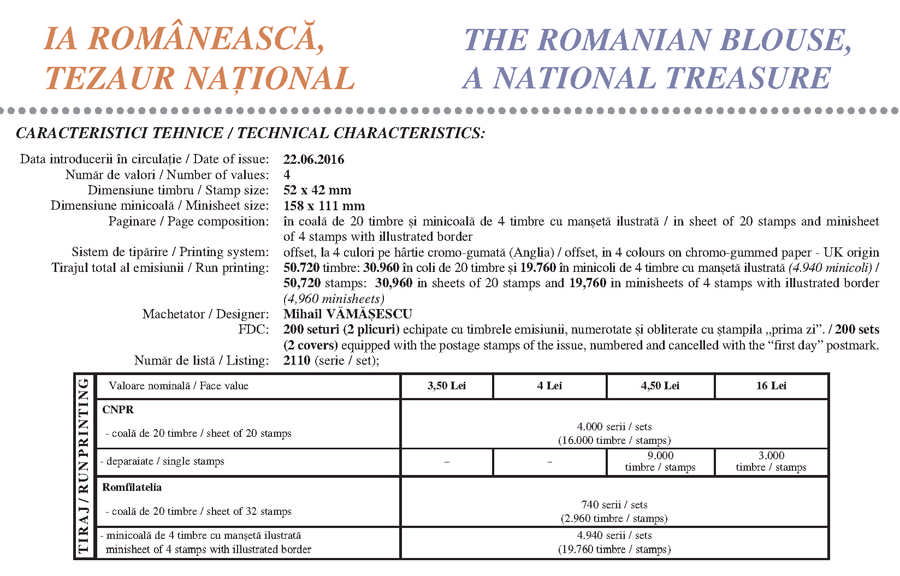